What is a Contempt of Court? A Family Court Saga. 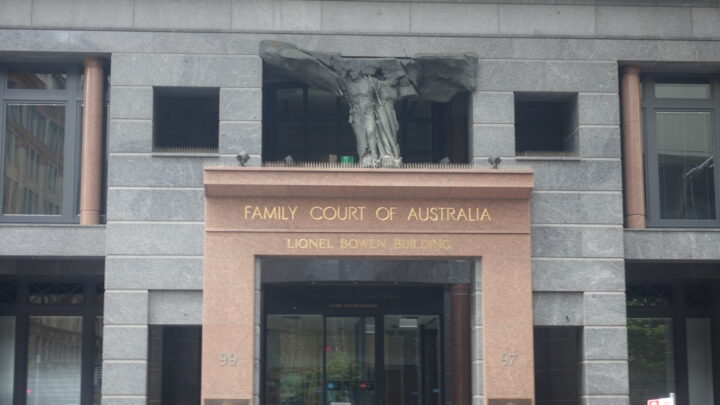 A man has taken the extraordinary step of personally suing a Family Court Judge after he was sent to prison for contempt of court during family law proceedings.

The story so far

In 2018, Mr Stratford (his real name cannot be used for legal reasons)  was sentenced to 12 months in prison for contempt of court after not supplying financial information during Family Court proceedings.

Mr Stratford had applied for property adjustment orders in the Federal Circuit Court; which is the court that deals with many less complex family law matters, including financial settlements as a result of separation or divorce.

The judge presiding over the case, Judge Salvatore Vasta, told Mr Stratford in court that if he did not hand over all of his financial information, he’d better “bring your toothbrush” – inferring he would be sent to prison.

Sentenced to 12 months behind bars

Judge Vasta ordered a sentence of imprisonment during a subsequent court appearance for not providing the full information required.

Mr Statford represented himself in court at the hearing, informing the judge that he had indeed provided details of his finances, in good faith and to the best of his ability.

He nevertheless given a 12 month sentence of imprisonment for contempt.

However, he ended serving six days of that sentence before it was set aside by the Full Court of the Family Court – Justices Steven Strickland, Peter Murphy and Michael Kent –  who called Mr Stratford’s treatment a “gross miscarriage of justice”.

Mr Stratford is now suing the judge, the State of Queensland and the Commonwealth of Australia in the Federal Court, seeking damages, including aggravated and exemplary damages, as well as interest and costs.

Mr Stratford’s statement of claim filed in the Federal Court includes a statement from a psychiatrist who described him as a “broken” man now suffering post-traumatic stress disorder and major depressive disorder and that his time in custody left him feeling “terrified”, “degraded and ashamed” and “powerless”.

The statement includes harrowing details of his time in prison including that he was attacked multiple times, including being randomly punched to the head and waking up to his cellmate – a drug addict – strangling him. It says he was given women’s denim shorts to wear, which led to other inmates ridiculing him, and was placed in a cell with no toilet paper, meaning he had to use a towel to wipe himself. He then had to use this “faeces-stained towel” for bedding when he became cold.

Mr Stradford was close to taking his own life, but abandoned his attempt at the last minute, as a result of which he was then held in a maximum-security prison for two days because he was at risk of self-harm.

Ordinarily a Judge cannot be sued for the decisions they make and are protected by the doctrine of ‘judicial immunity’.

Similarly, the doctrine of ‘advocate’s immunity’ means that lawyers are protected from a charge of negligence that is intimately related to litigation.

Mr Stradford’s case against Judge Vasta alleges the judge engaged in an abuse of government power, that the Federal Circuit Court is an inferior court and Judge Vasta exceeded his jurisdiction by departing from procedure and making orders he lacked the power to make, which means he “lost the benefit of the doctrine of judicial immunity”.

This case is breaking new ground as a test of whether a judge can actually be sued.

Judge Vasta was appointed to the Federal Circuit Court in 2015, and the Law Council of Australia has officially complained about his inappropriate behaviour in a number of cases in recent years.

Nine of Judge Vasta’s decisions were heavily criticised by appeal courts before being overturned between May, 2018 and December, 2019.

Their findings a ranged from the judge making gross errors in law, to denying procedural fairness and intimidating people who come to court without a lawyer.

The State of Queensland said in its statement of defence that it had made “reasonable inquiries” but remained “uncertain as to the truth” of some of the allegations made by Mr Stradford, including the incidents he allegedly experienced during his time in custody.

Judge Vasta and the Commonwealth have not yet filed documents in the case, which will be is before court in February 2020.

Local and District Courts deal with the issue of contempt of court differently than the Family Court, or Federal Circuit Court.

What is contempt of court in New South Wales?

A contempt of court is an act which has the tendency to interfere with or undermine the authority, performance or dignity of the court or those who participate in court proceedings.

The following conduct has been found to meet the legal test for contempt:

The courts have made clear that a contempt charge should be used as a ‘last resort’ to deal with unruly persons within the courtroom, and all other possible options should be considered before resorting to formal charge.

The courts have further found that rudeness or extreme discourtesy by lawyers does not amount to contempt.

In addition to this, the courts have made clear that, like police officers, magistrates and judges should be able to resist the sting of insults directed at them, as they are trained to be level-headed and to keep calm under stressful situations.

They should not, therefore, resort to a charge of contempt until and unless it is completely necessary.

What are the penalties?

The maximum penalty for contempt of court in New South Wales is 28 days in prison and/or 20 penalty units, which is currently $2,200.

What does the prosecution have to prove?

For a person to be found guilty of contempt of, the prosecution must establish each of the following ‘elements’ (or ingredients) of the offence beyond reasonable doubt:

The prosecution will fail if it cannot prove each of these elements to the required standard.

It is important to note, however, that the prosecution is not required to prove that the defendant intended to actually interfere with the administration of justice – just that he or she intended to do an act which, viewed by a reasonable person, had the tendency to do so.

This is known as an ‘objective test’, and means the defendant’s reasons behind doing the act are not determinative of the offence.

What are the defences?

In addition to the requirement to prove each element of the offence, the prosecution must also disprove any of the following defences if properly raised:

It must disprove any such defences beyond all reasonable doubt.

Contempt in the Family Court or Federal Circuit

While the same broad definitions of contempt apply, contempt in this setting more often than not is related to a breach of a court order, some of which may be procedural (supplying information when requested). Others can include, breaching restraints or injunctions placed on individuals by the court.

When someone does not comply with an order or continually fails to comply, then they can be found in contempt.

Being charged with contempt is more serious than ‘failure to comply’ and tends to be viewed as a ‘challenge’ to the court’s authority or procedural fairness, and as such it is taken very seriously.

Under family law, the Family Court has the same power as the High Court to punish for contempt. This means the Family Court can sentence a person to imprisonment, or deal with the person using alternatives to prison.

Ugur Nedim is an Accredited Criminal Law Specialist with over 20 years of experience as a criminal defence lawyer. He is the Principal of Sydney Criminal Lawyers®.