This object in Space flashed brilliantly for three months, then disappeared. Astronomers are intrigued. 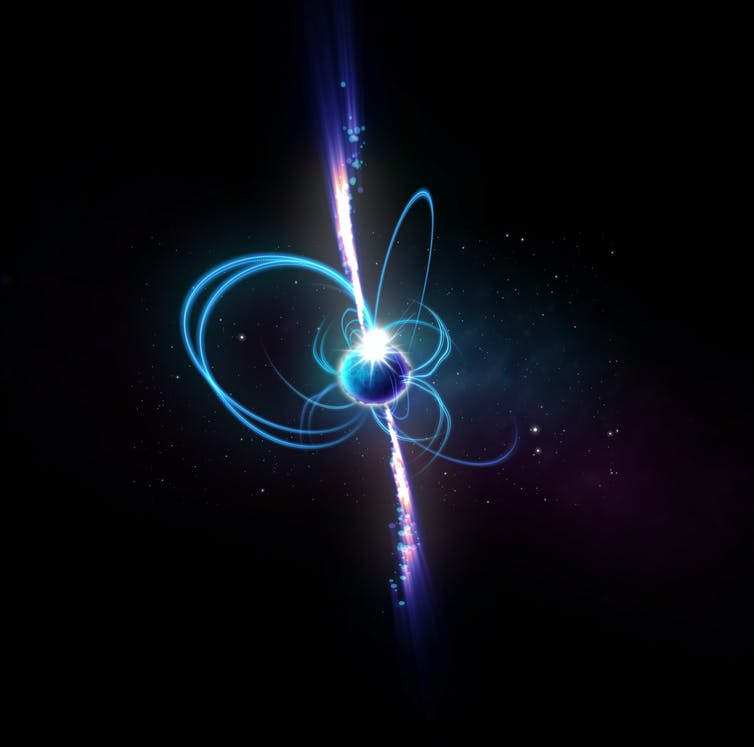 I exclaimed on Slack.

It was the first lockdown of 2021 in Perth, and we were all working from home. And when astronomers look for something to distract themselves from looming existential dread, there’s nothing better than a new cosmic mystery.

In 2020 I gave an undergraduate student, Tyrone O’Doherty, a fun project: look for radio sources that are changing in a large radio survey I’m leading.

By the end of the year he’d found a particularly unusual source that was visible in data from early 2018, but had disappeared within a few months. The source was named GLEAM-X J162759.5-523504, after the survey it was found in and its position.

Sources that appear and disappear are called “radio transients” and are usually a sign of extreme physics at play.

Earlier this year I started investigating the source, expecting it to be something we knew about – something that would change slowly over months and perhaps point to an exploded star, or a big collision in space.

To understand the physics, I wanted to measure how the source’s brightness relates to its frequency (in the electromagnetic spectrum). So I looked at observations of the same location, taken at different frequencies, before and after the detection, and it wasn’t there.

I was disappointed, as spurious signals do crop up occasionally due to telescope calibration errors, Earth’s ionosphere reflecting TV signals, or aircraft and satellites streaking overhead.

So I looked at more data. And in an observation taken 18 minutes later, there the source was again, in exactly the same place and at exactly the same frequency – like nothing astronomers had ever seen before.

At this point I broke out in a cold sweat. There is a worldwide research effort searching for repeating cosmic radio signals transmitted at a single frequency. It’s called the Search for Extra-Terrestrial Intelligence. Was this the moment we finally found that the truth is … out there? https://player.vimeo.com/video/657269342 One of the brightest pulses from the new radio transient detected with the Murchison Widefield Array.

I rapidly downloaded more data and posted updates on Slack. This source was incredibly bright. It was outshining everything else in the observation, which is nothing to sniff at.

The brightest radio sources are supermassive black holes flaring huge jets of matter into space at nearly the speed of light. What had we found that could possibly be brighter than that?

It’s repeating too slowly to be a pulsar. But it’s too bright for a flare star. What is this? (alien emoji icon)???

Within a few hours, I breathed a sigh of relief: I had detected the source across a wide range of frequencies, so the power it would take to generate it could only come from a natural source; not artificial (and not aliens)!

Just like pulsars – highly magnetised rotating neutron stars that beam out radio waves from their poles – the radio waves repeated like clockwork about three times per hour. In fact, I could predict when they would appear to an accuracy of one ten-thousandth of a second.

So I turned to our enormous data archive: 40 petabytes of radio astronomy data recorded by the Murchison Widefield Array in Western Australia, during its eight years of operation. Using powerful supercomputers, I searched hundreds of observations and picked up 70 more detections spanning three months in 2018, but none before or after.

The amazing thing about radio transients is that if you have enough frequency coverage, you can work out how far away they are. This is because lower radio frequencies arrive slightly later than higher ones depending on how much space they’ve traveled through.

Our new discovery lies about 4,000 light years away – very distant, but still in our galactic backyard.

We also found the radio pulses were almost completely polarised. In astrophysics this usually means their source is a strong magnetic field. The pulses were also changing shape in just half a second, so the source has to be less than half a light second across, much smaller than our Sun.

Sharing the result with colleagues across the world, everyone was excited, but no one knew for sure what it was.

The jury is still out

There were two leading explanations for this compact, rotating, and highly magnetic astrophysical object: a white dwarf, or a neutron star. These remain after stars run out of fuel and collapse, generating magnetic fields billions to quintillions times stronger than our Sun’s.

And while we’ve never found a neutron star that behaves quite this way, theorists have predicted such objects, called an “ultra-long period magnetars”, could exist. Even so, no one expected one could be so bright. https://player.vimeo.com/video/657248792 We think the source could be either a magnetar or a white dwarf, or something completely unknown.

This is the first time we’ve ever seen a radio source that repeats every 20 minutes. But maybe the reason we never saw one before is that we weren’t looking.

When I first started trying to understand this source, I was biased by my expectations: transient radio sources either change quickly like pulsars, or slowly like the fading remnants of a supernova.

I wasn’t looking for sources repeating at 18-minute intervals – an unusual period for any known class of object. Nor was I searching for something that would appear for a few months and then disappear forever. No one was.

As astronomers build new telescopes that will collect vast quantities of data, it’s vital we keep our minds, and our search techniques, open to unexpected possibilities. The universe is full of wonders, should we only choose to look.