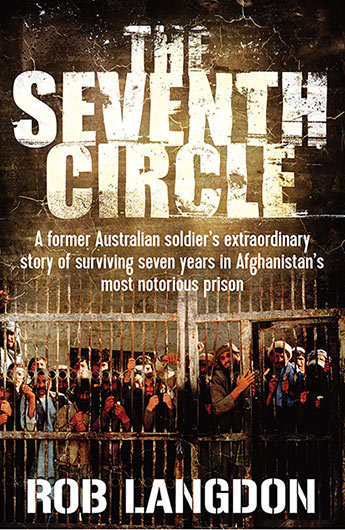 “The prison was a hell on earth, as I will attempt to show in these pages, but I’m afraid my words will never be up to the task of conveying the filth, the danger, the uncertainty, the noise, the stench, the hopelessness, the barbarity, the cheapness of life, the random violence, the anguish, and the sheer fucking boredom that I had to wade through day after day, more than two thousand days and nights, in what should have been my prime.“

An extraordinary story of Australian resilience and survival in Afghanistan’s notorious Pol-e-Charkhi prison, a place that’s been described as ‘the world’s worst place to be a westerner’.

‘I was arrested on Thursday 9th July 2009. On Wednesday I’d quit my job, killed a man and set his body on fire. I was sentenced to death. I’m not a good man, but I am an honest one. This is my story.’

The Seventh of Hell houses murderers, suicides and those who are violent against God.

Rob Langdon served in the Australian Army for almost fifteen years, before becoming a security contractor working in Iraq and Afghanistan. In July 2009 Rob was protecting a convoy when he shot and killed an Afghan guard during a heated argument after the guard drew a pistol on him. Rob’s claim of self-defence was dismissed by a court in Kabul that refused to hear any of his evidence or call any of his witnesses, and he was sentenced to death in a matter of minutes.

Rob’s death sentence was later changed to 20 years in jail, to be served in Afghanistan’s most notorious prison, Pol-e-Charkhi, described as the world’s worst place to be a westerner. Rob was there for seven years, and every one of those two thousand five hundred days was an act of survival in a jail run from the inside by the Taliban and filled with some of Afghanistan’s most dangerous extremists and criminals.

In 2016 Rob was pardoned and released. The Seventh Circle is his extraordinary account of what it took to stay alive and sane in almost unimaginable circumstances.

Robert Langdon grew up on Billa Kalina Station in the South Australian outback. In 1989 he joined the Australian Army where he served for 15 years before transferring to the Army Reserves. He served as a Section Commander on Operation Plumbob to the Solomon Islands in 1999 and Operation Lorosae in East Timor in 2000. Robert was awarded the Australian Active Service Medal with East Timor clasp, the Infantry Combat Badge and the United Nations Medal for his service overseas.

In 2004 he began work as a private security contractor in Iraq and Afghanistan and worked with the US Army, civilian contractors and in medical evacuations. In 2008, Robert was employed in Afghanistan by the U.S. company, The Four Horsemen International. His job was to supervise security operations for the company on such tasks as guarding food and supply convoys, and medical relief expeditions.

After serving seven years of a twenty year sentence in Kabul’s infamous Pol-e-Charkhi prison, Rob was pardoned by the Afghan President in mid-2016 and returned to Australia. He has always maintained his innocence.

Link to a short television interview with the author:

Former Australian soldier Rob Langdon speaks about his book The Seventh Circle and his time in Afghanistan.