The Right to Protest Has Been Restored: And Protestors have travelled from all over Australia to surround the National Parliament 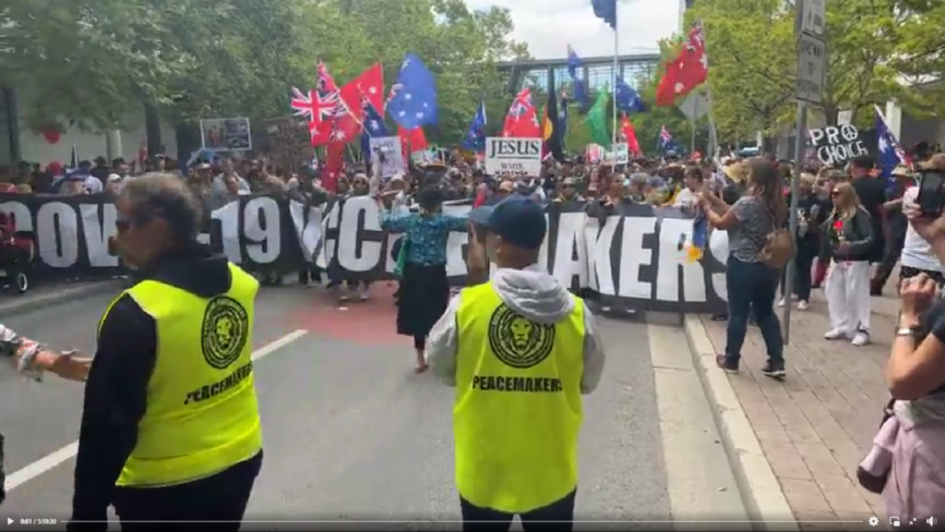 The mainstream media has utterly disgraced itself over the past two years; allowing itself to be manipulated or bludgeoned by government into being propaganda cyphers and willing puppets for the authoritarian derangement which has seized the country.

What the authorities failed to appreciate was that in this era of hyper-connectivity, the military mindset of command and control no longer works.

It was a day straight out of the history books; destined to resonate in the country’s increasingly troubled history. There was strong participation from the indigenous and the nation’s veterans, along with thousands of sacked nurses, teachers and police who, amongst so many others, having lost their jobs as a direct result of vaccine mandates, got in their trucks and cars and drove to Canberra to join the protests.

You can view the footage here.

Below are some stills from the coverage, interspersed with literary quotes which somehow seem to fit.

Due to poor quality internet our end, the image quality is not as high as we would like, but the force of this powerful national protest breaks through in any case.

Turning and turning in the widening gyre
The falcon cannot hear the falconer;
Things fall apart; the centre cannot hold;
Mere anarchy is loosed upon the world,
The blood-dimmed tide is loosed, and everywhere
The ceremony of innocence is drowned;
The best lack all conviction, while the worst
Are full of passionate intensity.

Begin the morning by saying to yourself, ‘I shall meet with the busybody, the ungrateful, arrogant, deceitful, envious, unsocial.’ All these things happen to them by reason of their ignorance of what is good and evil. But I, who have seen the nature of the good that it is beautiful, and of the bad that it is ugly, and the nature of him who does wrong, that it is akin to me, not only of the same blood or seed, but that it I participates in the same intelligence and the same portion of the divinity, I can neither be injured by any of them, for no one can fix on me what is ugly. Nor can I be angry with my kinsman, nor hate him. For we are made for cooperation, like feet, like hands, like eyelids, like the rows of the upper and lower teeth. To act against one another then is contrary to nature and it is acting against one another to be vexed and turned away.

To sin by silence, when we should protest,
Makes cowards out of men. The human race
Has climbed on protest. Had no voice been raised
Against injustice, ignorance, and lust,
The inquisition yet would serve the law,
And guillotines decide our least disputes.
The few who dare, must speak and speak again
To right the wrongs of many. Speech, thank God,
No vested power in this great day and land
Can gag or throttle. Press and voice may cry
Loud disapproval of existing ills;
May criticise oppression and condemn
The lawlessness of wealth-protecting laws
That let the children and childbearers toil
To purchase ease for idle millionaires.

The standing army is only an arm of the standing government. The government itself, which is only the mode which the people have chosen to execute their will, is equally liable to be abused and perverted, before the people can act through it.

Thus the State never intentionally confronts a man’s sense, intellectual or moral, but only his body, his senses. It is not armed with superior wit or honesty, but with superior physical strength. I was not born to be forced. I will breathe after my own fashion. Let us see who is the strongest.