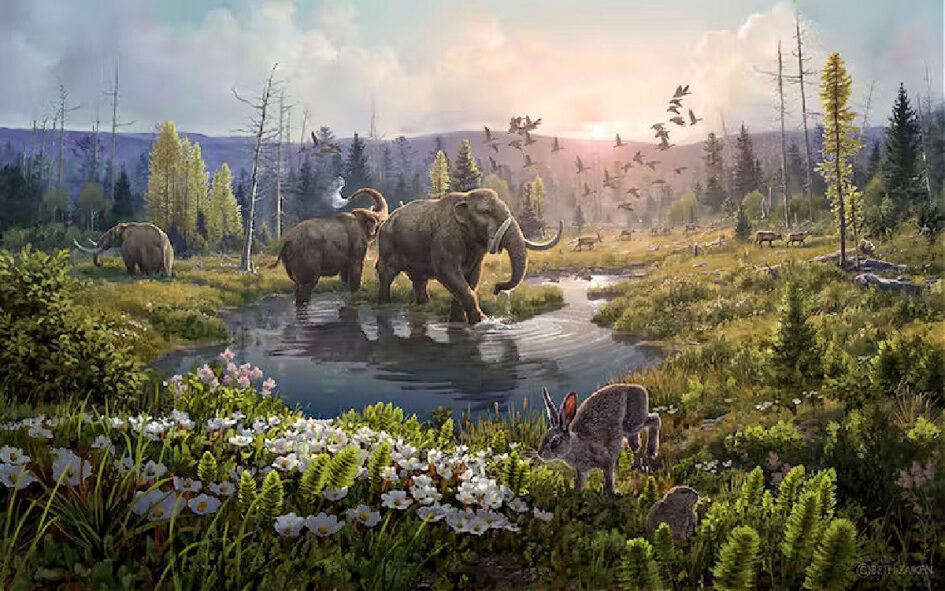 At the icy northern tip of Greenland, far into the Artic Circle, a deep bed of sediment beneath the mouth of a fjord has lain frozen and undisturbed for 2 million years.

Known as the Kap København Formation, this relic of a vanished world dates to a period when Earth was much warmer than it is today. The sediment built up in a shallow bay over a period of 20,000 years, before being buried beneath ice and permafrost.

Our team, led by Kurt Kjær, Mikkel Winter Pedersen and Eske Willerslev at Copenhagen University, has extracted and analysed the oldest DNA ever recovered from samples of this Greenlandic sediment. It reveals the plants, animals and microorganisms that thrived in an ecosystem unlike anything in the modern world.

As we report today in Nature, this DNA is more than a million years older than the previous record. We can now recover and directly study molecules that were made inside plants and animals 2 million years ago, opening a new window into the history of life on Earth.

A snapshot of an extinct ecosystem

Two million years ago, northern Greenland was a very different place. Average winter temperatures were more than 10℃ warmer, and there was less carbon dioxide in Earth’s atmosphere.

Our study, carried out by more than 40 scientists from Denmark, the UK, France, Sweden, Norway, the USA and Germany, pieced together minuscule fragments of DNA and matched them to sequences of known species. We found genetic traces of ancestors of modern reindeer, hares and lemmings, as well as mastodon – extinct elephant-like creatures which were not previously known to have lived in Greenland.

We also found DNA traces of plants including birch and poplar trees, as well as algae and other microorganisms – and a large proportion of DNA fragments we could not match to any known species.

But it is not just the specific species that are of interest but also how they co-existed in the same prehistoric ecosystem that was much warmer than today. This can tell us a lot about the possible impact on the biodiversity during warming periods and how it may drive their evolutionary response.

In essence, our study is similar to the “environmental DNA” (eDNA) research ecologists do today to understand biodiversity in modern ecosystems. The difference is that we are looking at an ecosystem that disappeared millions of years ago, which is why the recovery and bioinformatic analysis of these short, degraded molecules becomes a lot more challenging.

We know that the DNA inside cells of all living organisms mutates slowly, as environmental changes drive adaptation and evolution over many generations. However, we very rarely have a “time machine” to go back and look directly at the old DNA molecules.

To understand how DNA has changed over time, we usually compare the genomes of modern species and work backwards to create an evolutionary family tree. However, the possibility of studying DNA that is millions of years old means we will be able to directly observe the deep-time process of molecular evolution, instead of being restricted to the current genetic “snapshot” in present-day species.

What’s more, the DNA of the ancestors of modern species may show how they adapted to conditions that are very different from the ones they face today. We don’t gain those insights in this study, but if we can study those prehistoric genetic adaptations in detail in the future, it may allow us to predict if species are able to adapt to changes such as the ongoing global warming.

How long can DNA survive?

Despite what the Jurassic Park movies may tell you, DNA doesn’t last forever. It decays steadily over time – though the rate of decay depends on circumstances like temperature.

About a decade ago, my colleagues and I published a study of moa fossils that calculated a “half-life” for long-term DNA decay in bones. We predicted that recognisable fragments of DNA should be able to last more than one million years under ideal conditions, such as the deep freeze of permafrost.

And, indeed, in 2021 researchers recovered DNA from the tooth of a mammoth that lived in Siberia approximately 1.2 million years ago.

However, the new research shows something quite surprising. It seems that DNA can actually survive much longer as free molecules in sediment than in the bones of the animal it originally belonged to.

DNA molecules can bind to the surface of particles of clay which somehow protect them from the ravages of time. We do not know exactly how long DNA can survive in sediment, but if the preservation conditions are ideal, there is no reason to believe that we have found the limit here at two million years.

Once we know more about what kinds of sediment preserve DNA best, we will be able to hunt for it all over the world – though we are unlikely ever to realise the dream of examing 65 million year–old sequences of dinosaur DNA. I would be very happy to be proven wrong though!