Sydney: The Paintings of Michael Fitzjames 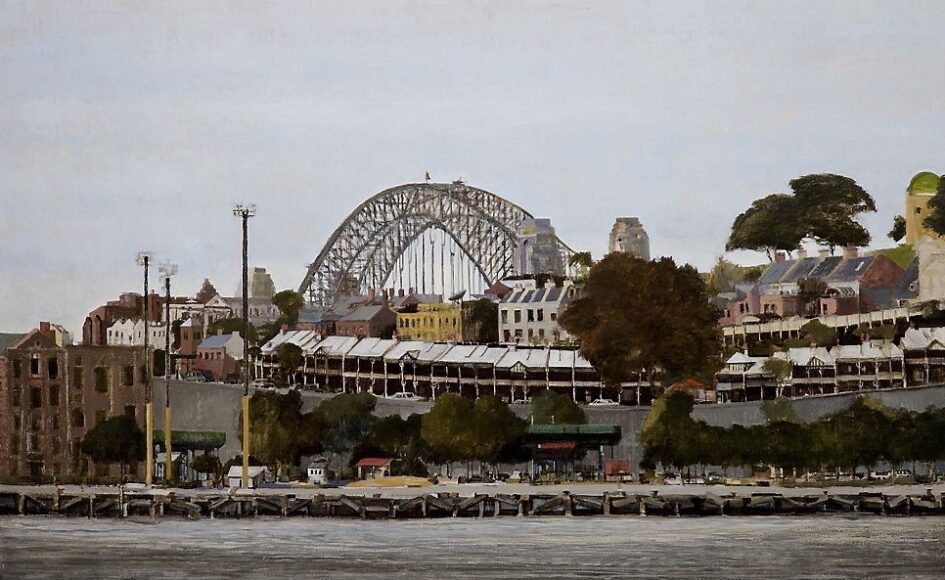 With poetry by Kenneth Slessor.

Michael Fitzjames, whose work is collected in a number of Australia’s leading institutions, is best known as an illustrator for newspapers, but his paintings are also highly valued. Here is a collection of his depictions of Sydney, a city better known for producing gangsters and spivs rather than poets or painters.

Kenneth Slessor passed away in 1971 and also worked in newspapers for much of his life; but is best remembered for his poetry. Five Bells, first published in 1939, was one of the most famous poems ever written about Sydney Harbour, and was a response to the death of a friend, Joe Lynch, who was a black and white cartoonist with whom Slessor had worked.

Lynch had drowned in the 1920s when he jumped off a Sydney ferry believing he could beat it to shore.

The poem starts with water imagery to describe two different kinds of time: the usual time which is measured by a clock, and psychological time, which is the world of imagination and memory.  The poem’s narrator sits in a room above Sydney Harbour looking at water through a window, where the ship’s clock can be heard sounding out five bells.

Time that is moved by little fidget wheels
Is not my time, the flood that does not flow.
Between the double and the single bell
Of a ship’s hour, between a round of bells
From the dark warship riding there below,
I have lived many lives, and this one life
Of Joe, long dead, who lives between five bells.

But I hear nothing, nothing…only bells,
Five bells, the bumpkin calculus of Time.
Your echoes die, your voice is dowsed by Life,
There’s not a mouth can fly the pygmy strait –
Nothing except the memory of some bones
Long shoved away, and sucked away, in mud;
And unimportant things you might have done,

Or once I thought you did; but you forgot,
And all have now forgotten – looks and words
And slops of beer; your coat with buttons off,
Your gaunt chin and pricked eye, and raging tales
Of Irish kings and English perfidy,
And dirtier perfidy of publicans
Groaning to God from Darlinghurst.
Five bells.

Then I saw the road, I heard the thunder
Tumble, and felt the talons of the rain
The night we came to Moorebank in slab-dark,
So dark you bore no body, had no face,
But a sheer voice that rattled out of air
(As now you’d cry if I could break the glass),
A voice that spoke beside me in the bush,
Loud for a breath or bitten off by wind,
Of Milton, melons, and the Rights of Man,
And blowing flutes, and how Tahitian girls
Are brown and angry-tongued, and Sydney girls
Are white and angry-tongued, or so you’d found.

But all I heard was words that didn’t join
So Milton became melons, melons girls,
And fifty mouths, it seemed, were out that night,
And in each tree an Ear was bending down,
Or something that had just run, gone behind the grass,
When blank and bone-white, like a maniac’s thought,
The naphtha-flash of lightning slit the sky,
Knifing the dark with deathly photographs.
There’s not so many with so poor a purse
Or fierce a need, must fare by night like that,
Five miles in darkness on a country track,
But when you do, that’s what you think.
Five bells.

In Melbourne, your appetite had gone,
Your angers too; they had been leeched away
By the soft archery of summer rains
And the sponge-paws of wetness, the slow damp
That stuck the leaves of living, snailed the mind,
And showed your bones, that had been sharp with rage,
The sodden ectasies of rectitude.
I thought of what you’d written in faint ink,
Your journal with the sawn-off lock, that stayed behind

With other things you left, all without use,
All without meaning now, except a sign
That someone had been living who now was dead:
“At Labassa. Room 6 x 8
On top of the tower; because of this, very dark
And cold in winter. Everything has been stowed
Into this room – 500 books all shapes
And colours, dealt across the floor
And over sills and on the laps of chairs;
Guns, photoes of many differant things
And differant curioes that I obtained…”

In Sydney, by the spent aquarium-flare
Of penny gaslight on pink wallpaper,
We argued about blowing up the world,
But you were living backward, so each night
You crept a moment closer to the breast,
And they were living, all of them, those frames
And shapes of flesh that had perplexed your youth,
And most your father, the old man gone blind,
With fingers always round a fiddle’s neck,
That graveyard mason whose fair monuments
And tablets cut with dreams of piety
Rest on the bosoms of a thousand men
Staked bone by bone, in quiet astonishment
At cargoes they had never thought to bear,
These funeral-cakes of sweet and sculptured stone.

Where have you gone? The tide is over you,
The turn of midnight water’s over you,
As Time is over you, and mystery,
And memory, the flood that does not flow.
You have no suburb, like those easier dead
In private berths of dissolution laid –
The tide goes over, the waves ride over you
And let their shadows down like shining hair,
But they are Water; and the sea-pinks bend
Like lilies in your teeth, but they are Weed;
And you are only part of an Idea.

I felt the wet push its black thumb-balls in,
The night you died, I felt your eardrums crack,
And the short agony, the longer dream,
The Nothing that was neither long nor short;
But I was bound, and could not go that way,
But I was blind, and could not feel your hand.
If I could find an answer, could only find
Your meaning, or could say why you were here
Who now are gone, what purpose gave you breath
Or seized it back, might I not hear your voice?\

I looked out my window in the dark
At waves with diamond quills and combs of light
That arched their mackerel-backs and smacked the sand
In the moon’s drench, that straight enormous glaze,
And ships far off asleep, and Harbour-buoys
Tossing their fireballs wearily each to each,
And tried to hear your voice, but all I heard
Was a boat’s whistle, and the scraping squeal
Of seabirds’ voices far away, and bells,
Five bells. Five bells coldly ringing out.
Five bells.

Slessor made his living as a newspaper journalist, mostly for The Sun, and was a war correspondent during World War II. In that capacity, he reported not only from Australia but from Greece, Syria, Libya, Egypt, and New Guinea.

The bulk of Slessor’s poetic work was produced before the end of World War II. His poem “Five Bells” remains probably his best known poem, followed by “Beach Burial”, a tribute to Australian troops who fought in World War II.