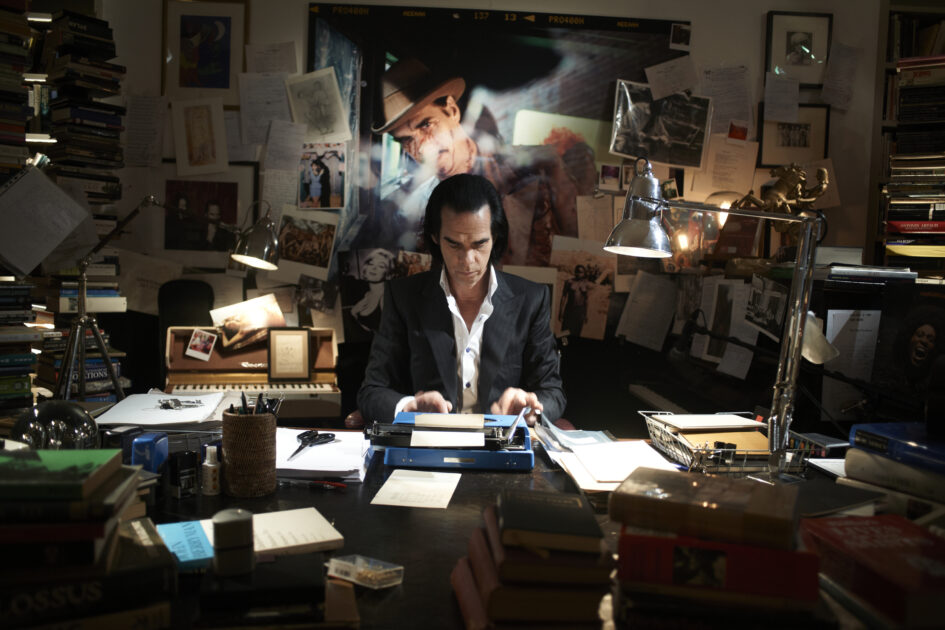 Boundless talent and a solid work ethic has turned Nick Cave into one of the world’s most admired artists.

And whether you’re a musician or an accountant, you need an office.

But not everybody’s office gets packed up and taken on a world tour!!

While there is a magnificent grandeur coupled with the remoteness of spiritual linking or longing about some of his recent work, at the same time he makes himself readily accessible to his expansive fan base.

On his website The Red Hand Files he answers questions from the legions of Nick Cave enthusiasts.

For most of my creative life I did indeed maintain an office at home. This office, with its massive desk, typewriter, shelves of books, and its accumulated piles of artefacts and self-absorbed scribblings, I considered to be my ‘sacred space’, a fortress where I could shut the door and lock out the world.

But in time this office, my retreat, started to become a place of exclusion or of hiding, a place where I could turn away from the world, under the guise of being creative, at the expense of all else.

In 2019 I gave my office – the desk and the entire contents – to the Royal Danish Library in Copenhagen for the very beautiful Stranger Than Kindness – The Nick Cave Exhibition.

My office is currently in Montreal as it travels the world with the exhibition. Handing it over was one of the things that allowed me to find my way back to the world. Giving up my office helped set me free.

I came to understand that the sacred space is the imagination itself, or rather the time spent inside the actual idea – the song you are composing, the story you are writing, or the picture you are painting.

The sacred space, for the artist, is within the creative flow, at the crucial and fiery point of artistic intention, where time suddenly contracts and the work finds its power and its groove. My sacred space became the rolling fire of the imagination.

But, you know, these days, I wonder about this too. Maybe these lofty claims about the imagination are yet more artistic hubris, a further place to hide, like the office – another invented way to separate ourselves from the world.

Perhaps, the sacred space is simply the world itself – a hallowed place where we all exist at this time, where we engage with life in all its many tempers, within the present moment. Perhaps the thing we have spent so much time escaping, or attempting to create, was there all along – the blessed space, the sacred space, the truly creative place – the world around us.

A small group of journalists gathered Tuesday afternoon in a replica of Nick Cave’s wildly messy but oh-so-inspired office. The room is the centrepiece of Stranger Than Kindness: The Nick Cave Exhibition, which opens April 8 at the Galerie de la Maison du Festival above the L’Astral venue in the Quartier des Spectacles.

A door to the office opened and the 64-year-old Australian alternative singer-songwriter strolled in and shouted, in mock surprise: “What are you all doing in my office?”

We wanted to know why the critically acclaimed artist had agreed to let a Danish curator create a biographical show inspired by his life and career, a show that premiered in Copenhagen in the spring of 2020 at the Royal Danish Library.

It’s a fascinating exploration of the intense singer’s oeuvre. The exhibition features more than 300 items that reflect all facets of his life, from his formative years in Australia, to his first punk-inspired bands, The Boys Next Door and the Birthday Party, to his time in Berlin in the ’80s, to recent years during which he’s grappled with the loss of his 15-year-old son Arthur, who died in 2015 after falling from a cliff near Brighton.

Do you ever wonder how Nick Cave became Nick Cave? The Bad Seed’s frontman, inimitable performer, writer, and musician collaborated with The Black Diamond on the Royal Academy of Arts in Copenhagen to create the new exhibition Stranger Than Kindness. Produced by Gucci and co-curated by Cave himself, the show gives us a unique autobiographical glance into the oeuvre and creative process of a true artist.

The show takes us through a journey of Cave’s mind with personal relics and recreations of his past. In one room, projections of a circus tent are pitched to set the stage of the 1989 music video for “Nick the Stripper,” where curator Christina Back explains the video set was a party to recreate their version of hell. Other corners of the exhibition show old bedrooms and office spaces.

One installation is a recreation of Cave’s old bedroom in West Berlin, where he lived in a crawl space covered with artifacts ranging from personal notebooks, religious iconography he collected from local fleas, and locks of hair. Another corner focuses on Cave the novelist, his desk sets the scene of where he wrote his second novel, The Death of Bunny Munro, displaying the manuscript and photographs of the author writing the piece in Tuscany.