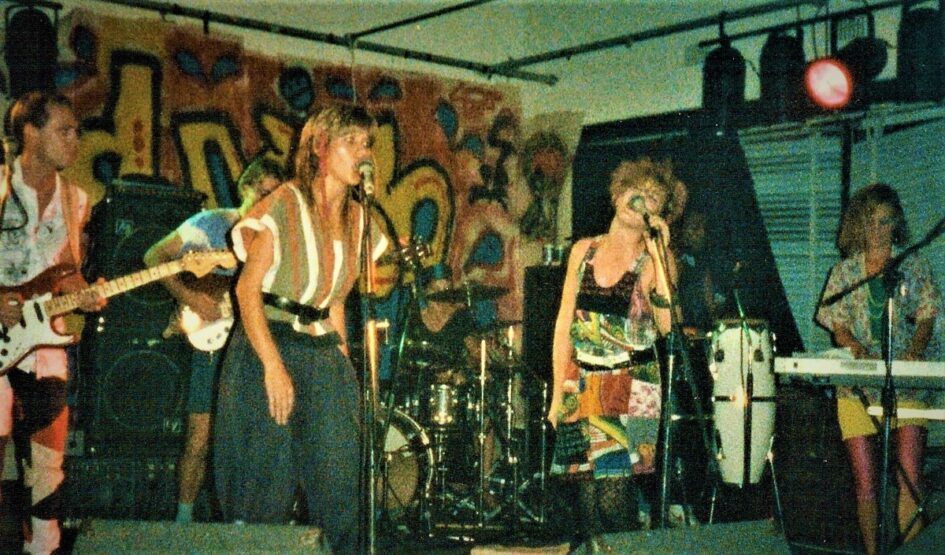 Amazing to me, now that I’m old, is that for such an impatient person I was able to devote the thousands of hours to playing guitar that it takes to become competent on the instrument.

It seemed when I was young that music was the final, unmapped frontier, that required no more than a guitar to explore. Not to mention that during the 1980’s and 90’s music was the cheap alternative for those of us who refused to put on a tie and go to work.

When I appeared with a band called The Sea Monsters supporting Mick Jagger on the Australian leg of the She’s the boss tour in the late 1980’s I thought I was on the launchpad to stardom.

I spent 40 years writing, recording and performing my music. I have written and co-written over 200 songs. I wrote and recorded five albums, only three of which were released due to the rollercoaster nature of life as a musician.

Unfortunately, at least for the increasingly geriatric such as myself, the music industry is a branch of the fashion industry. You not only need to have just the right sound but most importantly the right look. Old people don’t get played. We play a lot better than the latest young stars but the media aren’t interested. People like Elton John or the Rolling Stones are still producing great music but it isn’t fashionable anymore and so, their new material doesn’t get played on radio or TV. Even Sir Paul McCartney doesn’t get his new songs played.

That leaves the internet. Soundcloud is easy to use, free and totally accessible. So, I’ve uploaded 40 years of recorded songs, with pictures!

I have uploaded my first album, Greetings Earthlings by Lunar Sea Boatman in its entirety. This album, released in 1996, consisted of the best tracks from my first decade or so in the business. It features most of the great players I was privileged to work with, including singer Caron Clay, drummer Pierre Le Rat, bass player Paul Fisher, singers Parissa Bouas and Toni Allayailis, bass player Lyn Ashby, backing vocalist Darren Gower, legendary jazz pianist Kenny Powell and percussionist Luke Mason plus a few randoms who just happened to appear at the right time.

Greetings Earthlings took two years to record and set me up to recruit more great players and continue to not have to get a real job.

In those early years of unbounded optimism hearing three of my songs playing on the radio while I was in Bali was a surreal leap.

We had one of those old digital clock radios with the alarm set for 7am. One morning when it came on it was playing my song Samsara Cafe.

It was a jolt hearing these lines I had first written in Thailand while in an entirely different time and place.

Suffering the pleasures inherent in this life

A white bloated body gets ready for the knife

To spread the jam and cream that takes the pain away

While genius dies in the gutter

A few days later my song Hey Jo, about unrequited love, came on the car radio, much to my surprise and to the shock of the driver, who didn’t associate me with music at all.

The most popular song on Greetings Earthlings was Butterfly, which is about fickle, unfaithful hearts.

The video of Facing the Rain got a lot of play on MTV and the Australian music show Rage.

As I said, at this point in life, everything seemed possible; I was in love, margaritas were flowing and we were getting plenty of gigs.

The unusual lower case / upper case of the title was a typo in the beginning, but I decided I liked it.

This was my second full album, but it never got released. Perhaps it was the general chaos of the era, but financial issues and other problems meant ‘The uNCROSSING’ was never finished.

Some of my music is funny, some designed to provoke; then there are a few songs like Interplanetary Mary that are love songs, written to make you think and laugh all at the same time.

It was a cold dark night

From the heavens there came a bright light

Then lifted me gently from my bed

And into the arms of Mary

We’re not talking about some good Fairy.

The one song off this unreleased album that did get plenty of radio airplay and notoriety if not commercial success was French Letter, protesting French nuclear testing in the Pacific.

Dear Mr Jacques Chirac, how are things in France?

Pacific means Peace, and it’s a place that we adore

Stay out of the Pacific

That would be terrific, we all say.

A high point was receiving a letter from the then Australian Prime Minister, Paul Keating acknowledging my song and video French Letter and saying the government was making efforts to block French nuclear testing in the Pacific and our contribution was noted and appreciated.

My third album, ‘Lunar Verse’ was recorded live at community radio station 2GLF in Sydney, Australia. It’s only me and my 12-string guitar and was recorded to sell at solo gigs. The catalyst was a four month residency I landed at The Dive Bar in Hoi An, Vietnam in 2008. I’ve only uploaded three tracks from the 16 on ‘Lunar Verse’ because they are the only credible versions I have of those songs and they can’t be heard anywhere else.

Neanderthal Man: The late Pierre Le Rat spewed forth most of the words. This is a tribute to him, in absentia.

I’m a Neanderthal Man in the 21st Century

You gotta punch the information into me

These machines and these devices

Are causing me a personal crisis

Because I’m a Neanderthal man in the 21st Century.

Mediocre is such a beautiful word that its meaning almost makes it a one word oxymoron. I imagined Mediocre as a beautiful Spanish Princess.

To be at best no less than mediocre as the long days,

Mediocre the middle way, a course set upon a rock

This song was a reaction to Frank Zappa and Ian Dury and the Blockheads. Puerile, really but even now it might appeal to some specifically sick senses of humour.

My fourth album, Managony, was really a collapse of circumstance, recorded for the community radio program Dads on the Air. It was recorded with bass and keyboard player “Smiley” aka David Byrnes.

We had both recently survived divorce and were fathers with young sons. After I got kicked out of my home, I wrote a book, The Daddies’ Split Guide as a healing for the hell I’d endured and my publishers arranged an interview with Dads on the Air, the longest running men’s issues radio program in the world.

Dads on the Air needed original music so Smiley and I started writing and recording. We called ourselves ‘Horizon Shine’ and the album we eventually produced, we called ‘Managony’. I’ve uploaded what I consider to be the three best tracks from that album; ‘Shaving in a Basin full of Tears’, ‘Daddy Immaculate’ and my favorite, My Boy:

He fills my life with sunshine that never goes away

Because he’s my boy, every hour of every day

Every breath I take is a celebration of his life

My fifth and final album is ‘Wild Street’. It was never finished with the final two tracks recorded but not completed or mixed. The other seven tracks, including a nine minute live version of ‘Dumb Fuck World’, are now available on Soundcloud.

Most of them also have videos, which had become a lot cheaper to make and have been uploaded to YouTube.

Drummer Pierre Le Rat aka Peter Walker, a loyal, faithful friend for 30 years, died of cancer in 2017 at the age of 57.

I’d played with Pierre for over 30 years and his drumming is featured on a lot of my finest recordings. He played on every track on Greetings Earthlings and Wild Street with the exception of ‘Wasted Kisses’, which features the drumming of Andy Byrnes.

For me, Pierre’s death was like a full stop that marked the end of my career as a professional musician. All those crowded hours, intense friendships, wild flights of optimism and yes, chaotic, wasted days full of intimacy and chaos, are all receding into my very blurry memory.

I could have been a lawyer!

Check out Ian Purdie’s website, including links to his seven books.