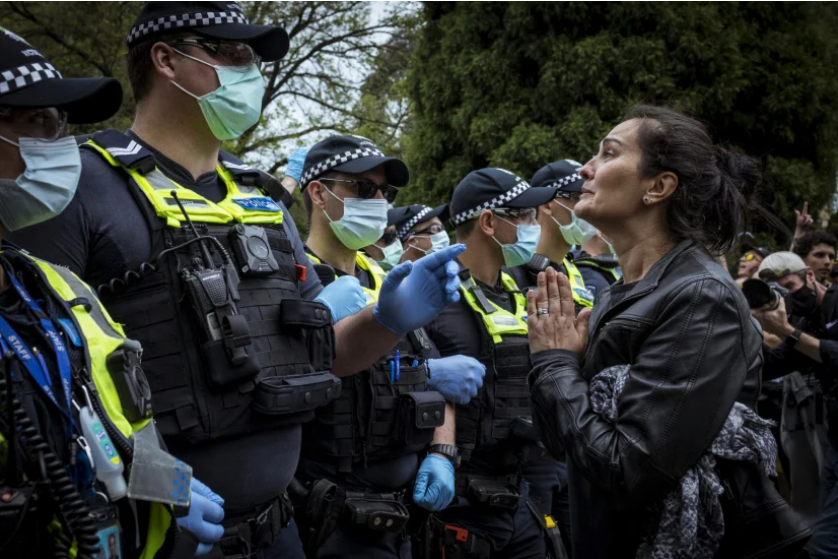 The group Reignite Democracy Australia has been busily documenting the many government abuses swelling out of Victoria under the most draconian and abusive lockdowns in the world.

After weeks of mounting criticisms, all of a sudden Premier of Victoria Daniel Andrews is being given rave reviews for supposedly having seen off the virus. That he has left the Victorian economy a smoking ruin and traversed new regions of public misconduct is temporarily being overlooked.

But if the authorities can introduce curfews and martial law under the guise of a health scare, they can do it again for any reason they choose.

In a sense the story has only just begun.

The mainstream media has done little to highlight the authoritarian abuses occurring on the streets of Melbourne and have in the main been complicit with governments in the creation of panic and confusion during the Covid Scare.

But others have stepped into the breach.

They describe themselves thus: “Reignite Democracy Australia was born at a time when physical protesting was deemed illegal and dangerous. During the Coronavirus crisis, the Premier of Victoria, Daniel Andrews started rising up to be a dictator of his own country. Victoria said NO! Victorians, feeling scared, confused and worried about their futures, decided to rise up online and start protesting through live streams. Democracy is not a right…it’s a privilege and we must fight for it. Together!”

In a major demonstration at the Shrine of Remembrance earlier this month protesters chanted “Freedom Freedom” and called for the Premier Daniel Andrews to be sacked. Police arrested 16 people and issued 96 fines.

While the current crop of academics have largely kowtowed to their funding sources, that is governments heavily invested in creating Covid panic and confusion, future historians will find the raw footage of these demonstrations of utterly compelling.

With widespread fears that Australia is about to enter another Great Depression, primarily due to the hopeless mismanagement of Covid, this footage will likely prove to be a prelude to a steadily worsening social and political situation.

The euphoric copy of journalists on the news that restrictions in Melbourne is unlikely to be reflected by the millions of people now attempting to stitch their lives back together in an altered world.

In response the Reignite Democracy Australia administrator wrote: “I promise I will not let you forget!!! He plays mind games with us. Takes everything away and gives us bread crumbs…don’t be fooled.
We will not forget!!!”

One commentator Maggie Mitchell spoke for many: “The more I dwell on the meagre breadcrumbs he offered us yesterday the more I think he needs a mental health assessment. Zero % of people in the whole of Australia are critical with Covid. 10 people at a wedding so the celebrant and the couple and seven guests! 10 people in church. WHY? 20 people at a funeral, still 25km limit, still a border between Metro and regional, still children have to wear masks in school, still adults have to wear masks. Do you not have confidence in your fellow Victorians to think for themselves?”

Fueling the outrage in Melbourne has been the truly astonishing behaviour of the Victorian Police. While the mainstream media, just like the Prime Minister Scott Morrison, has been largely MIA, what are usually described as fringe elements of the Australian media have stepped into the breach.

Australia’s media is heavily manipulated, corporatised and compromised. But all the efforts to control the public narrative have backfired, leading to contempt from the public and the rise of citizen journalists over which the government has far less control.

Maggie Mitchell posted a link to Rebel News, dismissed by the left-leaning media as far right. The footage shows the aftermath of Victoria Police swarming a petrol station in South Melbourne, surrounding, detaining and fining anyone there. Including two cyclists “out to get Hungry Jacks” and a woman “purchasing some water”.

All of this represents a social scar that may never heal.

The thuggish behaviour of the Victorian Police has made international headlines. Acting as Daniel Andrews’ private Praetorian Guard, they wrestle to the ground anyone who dares to defy Andrews’ edicts. A small man uses the police as his own private bully boys, harassing everyone from pregnant women to elderly people sitting too long on a park bench.

The “woke” population of Victoria have finally woken up to what they are witnessing: The Banality of Evil.

The internet is now alive with gags and memes, all of them in a sense not just ridiculing the leader of the second largest state in Australia, but in a direct sense, Australia as a whole. We’re as dumb as everyone always thought we were.

The situation in Victoria has become an utter embarrassment to the nation.

On a broader level, Andrews has become the living, breathing exemplar of the corruption of Australian democracy.

This week, millions of people under house arrest in Victoria looked forward to a long awaited lifting of restrictions, first delayed, and then announced with many constraints still in place.

Medical opinion has moved on, but not the Premier of Victoria Daniel Andrews, who has become a worldwide symbol of oppression and government incompetence.

As the outspoken Australian medical practitioner Dr Guy Campbell has concluded: “If lockdown was a “medication” it would never have been licensed. Not only unproven and radically applied to whole society, 42,000 Medical Doctors & Health Scientists have signed against it in the “Great Barrington Declaration”.

“Worse than that lockdowns do not stop Covid but only delays it, and the more applied the greater the rebound.

“Daniel Andrews is so Covid obsessed that he has lost complete sight of the damage he is causing to Victoria.“

Australia’s so-called Parallel Secret Police Force, the intelligence agencies and the Australian Federal Police working in concert, have a long and extremely sorry history of crushing free speech, over surveillance of the population and ignorant manipulation of the public narrative to suit their political masters.

But there’s one group they’re having trouble shutting up, and that’s Reignite Democracy Australia, a group particularly focused on the madness which has overtaken Melbourne.

The military mindset which rules the agencies has never understood the civilian population or a civilian mindset. They cannot understand why the public will not comply with their orders, not withstanding how utterly stupid so many of the rules, regulations and edicts which Australian governments have rained down upon the population throughout the year really are.

One thing the agency’s forget, in 2020 everyone has a smart phone.

Abuses by the police are filmed and uploaded in real time.

The multiple failures of Australia’s mainstream media during the Covid Panic can be worked around. Welcome to the rise of Citizen Journalists.

The plucky determination of ordinary working class Australians to resume their normal lives against the overwhelming power of the state, including not just police brutality and the use of force, but as well insanely high and extremely punitive fines crippling to any ordinary working person.

These included a $4,957 fine to anyone caught taking part in an unlawful gathering. Under Melbourne’s restrictions, a maximum of five people from two households (or any number of people from a single household) could gather in public spaces outside. The fines also applied to anyone trying to leave Melbourne for regional Victoria.

That’s the banning of the right to protest. That’s martial law.

Figures released in September showed between March and June this year police recorded more than 6,000 breaches of COVID-19 restrictions.

The owners of hair salon Adam and Weave became national heroes when, like thousands of others, they faced the destruction of their business, insisted on opening.

Aggressively shut down by police and fined almost $10,000, a ridiculous amount for any struggling business, Reignite Democracy Australia has followed their fortunes closely.

Here is an interview with Jomana Najem, one of the owners of Adam and Weave.