Press Release Journalism Favours Scott Morrison and the Liberal Party: The Best of 2020. 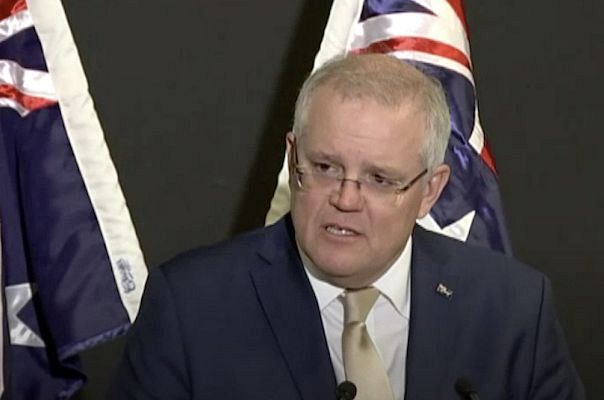 By Rashad Seedeen with Independent Australia

Of late, it has become increasingly frustrating to follow the news.

During times of relative stability and peace, poor journalism is an annoyance. But during times of crisis, mediocre reporting has far greater consequences.

There’s much criticism that we can examine but let’s look at just one area of concern — press-release journalism. This is a lazy and even tribal form of reporting where journalists simply repackage the sound-bites and press releases of politicians.

It is rather easy to dissect the rabid partisan muckraking of Murdoch’s usual suspects. Instead, let’s examine some leading journalists who I would consider to be usually fair in their political assessments —Australian Financial Review’s Phil Coorey and The Australian’s Peter van Onselen.

What is really wrong with our media: The Eden Monaro example

We can do this by examining two issues that have become most prominent of late — contact tracing and border restrictions.

Following the Victorian government’s announcement of the roadmap to COVID normal — the Federal Government came out swinging, the feel-good mantra that “we are all Melburnians now” long forgotten.

This was then followed by an accusatory news conference.

The mass media almost immediately followed suit in a group pile-on, with Phil Coorey resorting to simply reporting the Prime Minister’s commentary, not wasting any time to research contrary evidence or even providing the Victorian Government with a right of reply.

Peter van Onselen provided a more measured account but followed Morrison’s crowing in describing NSW’s ‘far superior contact tracing systems’ in such glowing terms you would be mistaken to think it was akin to a NASA control room with laser-sharp precision in suppressing outbreaks.

Without really explaining what this superiority was, van Onselen’s reporting lacked substance and appeared to be mimicking Morrison’s sound-bites.

The Israel lobby and media independence

Head of Biosecurity Research Program at the Kirby Institute at the University of New South Wales, Raina Macintyre, has countered with a detailed account of how contact tracing systems work and how they still follow the same process: ‘manually and all use whiteboards’.

What Macintyre correctly points out was that NSW never experienced such overwhelming high case numbers and wide-spread community transmission to follow up. If such an outbreak occurred in NSW there’s a very real chance the state would be in the same boat as Victoria.

It is worth sharing here Macintyre’s assessment:

‘No health workforce in the world, no matter how organised, well-resourced and efficient, can do manual contact tracing successfully when an epidemic becomes too large.’

Such conclusions would never feature in a Morrison press release but should be included in fully researched news pieces.

Macintyre did also provide an important insight that the Victorian Department of Health and Human Services (DHHS) has been the victim of successive budget cuts from twenty years of state governments.

The decline of journalistic standards has appreciably contributed to the political malaise we find ourselves in.

Osman Faruqi, in The Saturday Paper, has provided an even more comprehensive and damning assessment of the lack of staffing, poor processes and the misguided neoliberal approach to outsourcing work to a patchwork of private contractors. Faruqi, unlike van Onselen and Coorey, has provided a detailed account of how contact tracing completely failed in Victoria, that was admitted to by Victoria’s Chief Medical Officer, Brett Sutton, himself.

Some might believe that such analysis vindicates Morrison and the mainstream media’s characterisation of contact tracing in Victoria. But if it wasn’t for Faruqi, we wouldn’t truly understand the extent of this policy failure because political journalists like Coorey and van Onselen presented the issue like a couple of ambassadors for the federal government without research or a real explanation.

Meanwhile, journalists everywhere seem to have forgotten Morrison’s failed implementation of contact tracing with the near defunct COVID Safe app.

Let’s now look at the issue of state border closures. Morrison and many in his Party built a cause célèbre against the Queensland government over its strict border closures twisting the denial of an ACT woman’s request to attend her father’s funeral in Queensland as an act of cruelty towards a family deserving of compassionate consideration.

Without a second thought, the mainstream media jumped on board in their attacks upon the supposed cruel, inconsistent and nonsensical border rulings by Queensland’s Premier, Annastacia Palaszczuk. Palazczuk’s decision to back her Chief Health Officer’s decision to deny entry offended van Onselen so deeply that he declared ‘I can’t respect that’ and described border officials dealing with massive case loads of applications as a group that ‘couldn’t organise a piss-up at brewery’.

Phil Coorey, in lock-step with the PM, was also enraged at the injustice and declared on Twitter that it was a ‘raging double standard’.

Murphy described such a situation eloquently:

‘I don’t think he needs a rapid response Greek chorus, ululating synchronously as if their lives depended on it … Various News Corp publications, Ray Hadley on 2GB, Peta Credlin, flanked by a couple of serially angry Sky blokes whose names currently escape me, all reported for duty on Thursday to amplify the sad tale of a young woman unable to attend her father’s funeral.’

Border restrictions have been quite frustrating and even tragic for many families but Australian state governments have made a point to follow the advice of their Chief Health Officers and implement policies accordingly.

Border closures and limiting movement are a key part of that. They might even get it wrong on some individual cases. But we are in the middle of a pandemic and each government is focused entirely on the big picture of keeping cases numbers down. Context is key.

The same media that has spent years dragging Assange’s name through the mud is now engaging in a blackout on his treatment.

It’s surprising that the mainstream media did not have such outrage weeks earlier in late August when a Sudanese mother was denied entry to South Australia – a state-led by a Liberal premier – on no less than eight failed attempts to see and bury her daughter, who unexpectedly passed away while on holiday.

SBS News was the only major news station to cover the story at the time, with the spotlight providing the catalyst for the South Australian government to relent, authorising her entry to the state a day later.

At the time, Morrison and the majority of the mainstream media did not take notice that such injustices and obstructions existed. In press release journalism, politicians dictate when something becomes an issue worth investigating.

For Morrison, his partisanship is painfully obvious, especially considering Queensland has an upcoming election and unsurprising for a politician of such low calibre. We expect more from leading journalists.

Intervene: How the Government can secure media diversity

We can have a stronger, more varied media if the Government legislates to prevent further takeovers and mergers, writes Ross Thorley.

Furthermore, Morrison and the mainstream media have appeared to have forgotten the Sri Lankan family languishing in detention on Christmas Island. They were put there by the federal government in a border policy of extreme cruelty as an electoral race-baiting policy and to remind refugees everywhere how they treat those seeking asylum in Australia.

Morrison and the mainstream media seemed to have also forgotten that, in 2011, Morrison was vocally opposed to flying a family of refugees to Sydney for funerals of people killed in the Christmas Island shipwreck.

Such accusations of double standards against the Morrison Government don’t seem to be in the lexicon of our mainstream media at the moment.

Journalists should never be led by the nose on the behest of a prime minister, especially some of our best. When reporters resort to press release journalism, they allow themselves to simply become tools in a high-stakes political game.

Rashad Seedeen is a school teacher and a PhD candidate in International Relations from La Trobe University, Melbourne. He tweets at @rash_seedeen.