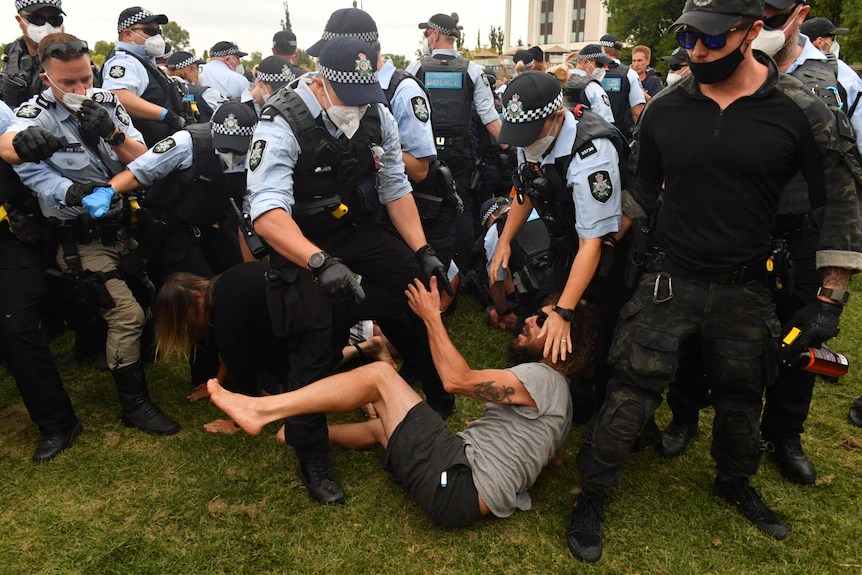 This is the biggest story in Australia. With the government in election mode, and deeply embarrassed, Day Three of the Convoy to Canberra campaign saw escalating tensions. Police and protesters have clashed and three people were arrested, after the force moved in on the peaceful sitting.

About 4:00pm, police officers – who had been patrolling the area all day – went to the campsite at the National Library of Australia in Canberra’s parliamentary zone, to provide written information to demonstrators that they were parking and camping illegally, and might be fined if they remained.

A commotion caused capsicum spray to come out, with violent scenes unfolding largely due to the antagonising by police of the group after being told they were unfairly targeting the protesters with the search.

A commotion caused capsicum spray to come out, with violent scenes unfolding largely due to the antagonising by police of the group after being told they were unfairly targeting the protesters with the search.

ACT Police say one woman had been charged with assaulting a police officer, and two men who reportedly interfered with the woman’s arrest will both be charged with obstructing police.

Footage can be seen of two officers giving each other a ‘cheers’ with capsicum spray cans after pulling them out on the demonstrators in their retreat from the area.

If you don’t feel sad about this era of Australian history, you aren’t sentient.

The majority of the group remained peaceful at all times.

As can be seen in this video of those arrested being taken away, the Australian Federal Police appear to be present on the ground with the ACT Police.

One elderly man was injured by police during the altercation in the park.

What has been described as “the womb of new Australia” continue to grow, while police look to be finding ways to stop this campaign before it gathers more steam.

EARLIER IN THE DAY

Until this point, things had remained peaceful at the campsite.

Police had been doing multiple walkthroughs of the Canberra campsite since early in the morning.

They said the would return every hour for a patrol, and did so, until the commotion occured.

Before doing this, forces erected barricades to the front of Parliament House and also attempted to block the entrance to the main park where protesters are staying.

Despite mainstream media reports, a contingent still remains in the area and say they will continue their occupy actions, with further waves of convoys expected to arrive in the area.