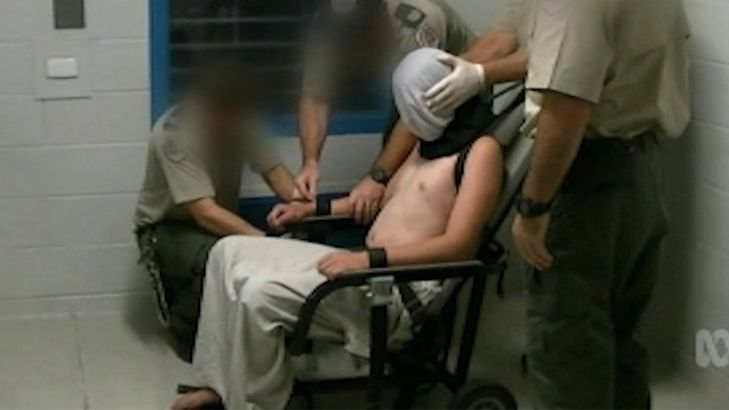 Six years after Four Corners exposed the atrocities being perpetrated upon children at Darwin’s Don Dale Youth Detention Centre – and the subsequent push for reforms in its wake – the Northern Territory government has successfully re-established the institutional torture of kids.

Around the time of the revelations, the nation learnt that kids were being strapped to chairs and hooded, gassed in isolation cells and hogged tied by so-called youth justice officers in the former Berrimah adult maximum security  prison, which was slated to be torn down in 2014.

The torture of detained kids, which extended to Alice Springs youth prison, sparked The Royal Commission into the Protection and Detention of Children in the NT. Its 2017 final report delivered four volumes of recommendations, including shutting Don Dale and raising the imprisonment age.

But the notorious child gaol still stands. Last weekend saw four detainees taken to hospital due to self-harm. This is in line with a rise in such incidents, which NT acting children’s commissioner Nicole Hucks told NT News is due to the “continual and systematic use of extended lockdowns”.

Indeed, the Office of the Children’s Commissioner NT recently released data outlining that the number of youths in detention in the territory has increased by 200 percent since May 2020, which is clear evidence that last year’s “tough on crime” youth bail reforms are having the desired effect.

“Bail is a privilege not a right”

Based on an analysis of NT government custody figures, the children commissioner’s data reveals that over May this year, 100 youths had passed through the territory’s two youth gaols, while in May 2020, 31 children did, with a dramatic spike already evident in May 2021, when 67 kids were inside.

The rise mid-last year coincided with the Gunner ministry’s passing of the Youth Justice Legislation Amendment Act 2021 (NT), which enacted a range of tougher laws, including the automatic revoking of bail for serious breaches and the broadening of the range offences which bail doesn’t apply to.

The push for harsher bail laws for youths came from NT opposition leader Lia Finocchiaro. The Country Liberal Party MP tabled her own set of laws to increase the number of kids locked up in the community, claiming recent rises in crime rates warranted such action.

Department of Territory Families, Housing and Communities figures show that on 6 June there were 41 youths in Darwin and Alice Springs detention. Thirty one of these kids were on remand, which means 75 percent of the children in detention were yet to be convicted or sentenced.

And according to Hucks, the reason for the ongoing use of extended lockdowns and isolation, which is leading to self-harm, is that the bail reforms have led to such a steep rise in child detainees that there aren’t enough staff to run the youth prisons in a humane manner.

The NT Labor government passed a 2019 bail reform bill in response to the Royal Commission recommendations, which provided a presumption in favour of bail for youths, except under extreme circumstances, and the removal of the offence of a breach of a bail condition for youths.

But in a sign that the settler colonial state of Australia is working like a well-oiled machine regardless of which major is at the helm, the conservative opposition ran a scare campaign and produced laws to weaken bail reforms, which then led the Gunner ministry to pass its own version of the measures.

Finocchiaro said in March that the bail reforms her party was drafting would be “tougher to support our police and support our community”, however she failed to spell out that she was a white woman basically advocating for the greater detention of First Nations children as young as 10 years old.

Youth detention in the Northern Territory overwhelmingly involves locking up Aboriginal kids. On 2 May this year, there were 63 children in territory youth gaols and 61 – or 97 percent – of them were First Nations.

Figures show that the disproportionately high number of youth detainees being Aboriginal is consistent over the past year. But it’s further been going on for decades. And recent years have seen a number of occasions when 100 percent of NT youth on the inside were Indigenous.

Despite such representation in the territory’s youth prison system, Aboriginal and Torres Strait Islander children account for as little as 9 percent of the younger population in the NT.

Yet, this is a national issue, with about 50 percent of imprisoned youths being First Nations across jurisdictions, whilst they only account for 6 percent of the overall youth populace in this country.

And as the Australian Institute of Health and Welfare’s 2021 youth detention report sets out, First Nations young people are 20 times more likely to be in detention than their non-Indigenous counterparts.

The Don Dale revelations caused an awakening of national concern. The reports on the centre were followed by others involving children housed in Victoria’s Barwon adult prison, excessive force used at Queensland’s Cleveland children’s gaol, as well as incidents at Tasmania’s Ashley youth centre.

But the nation has since gone back to sleep on the issue. Queensland passed presumption against bail laws for youths in April last year, while Victoria has just shelved its youth detention reforms as the Andrews government fears it may appear soft on crime in the lead up to the next state election.

And all jurisdictions nationwide continue to maintain the age of criminal responsibility at 10 years old, which is way below the global median of 14.

In one recent year, around 600 kids between the ages of 10 and 13 passed through the nation’s systems of incarceration, with at least half, if not more, being First Nations youths.

The Royal Commission called for the age to be raised to 12. Tasmania has just announced it’s raising it to 14, as did the ACT last year. However, the Council of Attorneys General has consistently stalled on the issue of raising the age over a number of years.

Waiting for it to blow over

In 2017, due to the Don Dale fallout, then attorney general George Brandis determined to ratify the OPCAT treaty, which signalled that our nation would roll out a UN governed system of independent inspection bodies to guard against human rights abuses in places of detention.

However, the federal Coalition government failed to rollout the system that would serve to improve the conditions in youth detention centres, in a similar manner to the way that the Royal Commission’s recommendations to close Don Dale and raise the age have been forgotten.

So, as authorities shift back to the gear they were travelling in prior to the calls to stop the torture of minors in youth gaols, issues like self-harm are on the rise again, which, last weekend, saw one 16-year-old boy at Don Dale hospitalised twice after trying to take his own life on two occasions.