Most Humans haven’t evolved to Cope with the Cold, yet we dominate Northern Climates 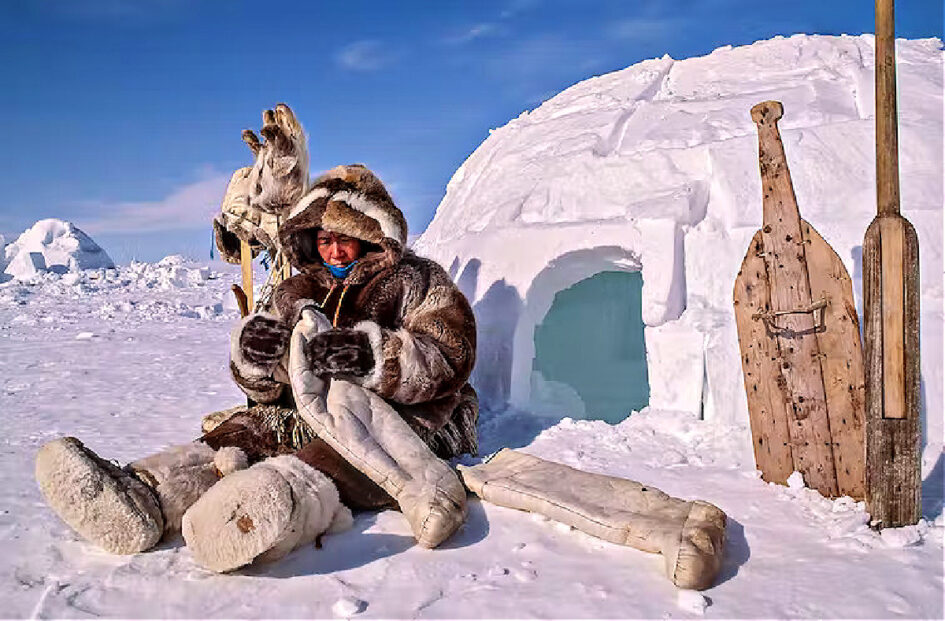 Humans are a tropical species. We have lived in warm climates for most of our evolutionary history, which might explain why so many of us spend winter huddled under a blanket, clutching a hot water bottle and dreaming of summer.

Indeed all living apes are found in the tropics. The oldest known fossils from the human lineage (hominins) come from central and eastern Africa. The hominins who dispersed northwards into higher latitudes had to deal with, for the first time, freezing temperatures, shorter days that limited foraging time, snow that made hunting more difficult and icy wind chill that exacerbated heat loss from their bodies.

Given our limited adaptation to the cold, why is it that our species has come to dominate not only our warm ancestral lands but every part of the globe? The answer lies in our ability to developed intricate cultural solutions to the challenges of life.

The earliest signs of hominins living in northern Europe are from Happisburgh in Norfolk, eastern England, where 900,000-year-old footprints and stone tools have been found. At that time, Happisburgh was dominated by coniferous forest with cold winters, similar to southern Scandinavia today. There is little evidence the Happisburgh hominins stayed at the site for long, which suggests they didn’t have time to adapt physically.

It’s still a bit of a mystery how these hominins survived the tough conditions that were so different from their ancestral African homelands. There are no caves in the region, nor evidence of shelters. Artefacts from Happisburgh are simple, suggesting no complex technology.

Evidence for deliberate campfires at this time is contentious. Tools for tailoring fitted, weather-proof clothes don’t appear in western Europe until almost 850,000 years later. Many animals migrate to avoid seasonal cold, but the Happisburgh hominins would have had to travel about 800km south to make a meaningful difference.

It’s hard to imagine hominins surviving those ancient Norfolk winters without fire or warm clothing. Yet the fact the hominins were so far north means they must have found a way to survive the cold, so who knows what archaeologists will find in the future.

Sites from more recent settlements, such as Boxgrove in West Sussex, southern England, offer more clues about how ancient hominins survived northern climates. The Boxgrove site dates to nearly 500,000 years ago, when the climate deteriorated towards one of the coldest periods in human history.

There is good evidence these hominins hunted animals, from cut marks on bones, to a horse shoulder blade probably pierced by a wooden spear. These finds fit with studies of people who live as foragers today which show people in colder regions depend on animal prey more than their warm climate counterparts. Meat is rich in the calories and fats needed to weather the cold.

The best silhouette for avoiding heat loss is a sphere, so animals and humans in cold climates get as close to that shape as possible. There is also clearer evidence for campfires by this period.

The Neanderthals, who lived in Eurasia about 400,000-40,000 years ago, inhabited glacial climates . Compared to their predecessors in Africa, and to us, they had short, strong limbs, and wide, muscular bodies suited to producing and retaining heat.

Yet the Neanderthal protruding face and beaky nose are the opposite of what we might expect to be adaptive in an ice age. Like Japanese macaques living in cold areas and lab rats raised in cold conditions, living humans from cold climates tend to have relatively high, narrow noses and broad, flat cheekbones.

Computer modelling of ancient skeletons suggests Neanderthal noses were more efficient than those of earlier, warm-adapted species at conserving heat and moisture. It seems the internal structure is as important as overall nose size.

Even with their cold-adapted physique, Neanderthals were still hostage to their tropical ancestry. For example, they lacked the thick fur of other mammals in glacial Europe, such as woolly rhinos and musk oxen. Instead, Neanderthals developed complex culture to cope.

There is archaeological evidence they made clothes and shelters from animal skins. Evidence of cooking and use of fire to make birch pitch glue for the manufacture of tools show sophisticated Neanderthal control of fire.

More controversially, some archaeologists say early Neanderthal bones from the 400,000-year-old site of Sima de los Huesos in northern Spain show seasonal damage from slowing down their metabolisms to hibernate. The authors argue these bones show cycles of interrupted growth and healing.

Only a few species of primate hibernate such as some lemurs in Madagascar and the African lesser bushbaby, as well as the pygmy slow loris in norther Vietnam.

This might give you the idea that humans can hibernate too. But most species that hibernate have small bodies, with some exceptions like bears. Humans may be too big to hibernate.

Jack of all trades

The earliest fossils in the Homo sapiens lineage date from 300,000 years ago, from Morocco. But we didn’t spread out of Africa until about 60,000 years ago, colonising all parts of the globe. This makes us relative newcomers in most habitats we now inhabit. Over the intervening thousands of years, people living in freezing cold places have adapted biologically to their environment but on a small scale.

One well-known example of this adaptation is that in areas with low sunlight, Homo sapiens developed light skin tones, which are better at synthesising vitamin D. The genomes of living Inuit people from Greenland demonstrate physiological adaptation to a fat-rich marine diet, beneficial in the cold.

More direct evidence comes from DNA from a single 4,000-year-old permafrost-preserved hair from Greenland. The hair hints at genetic changes that led to stocky body shape that maximised heat production and retention, like the hominin we only have one shin bone from the Boxgrove site.

Our tropical legacy means we would still be unable to live in cold places without developing ways of coping with the temperatures. Take, for example, the traditional Inuit parka, which provides better insulation than the modern Canadian army winter uniform.

This human ability to adapt behaviourally was crucial to our evolutionary success. Even compared to other primates, humans show less physical climatic adaptation. Behavioural adaptation is quicker and more flexible than biological adaptation. Humans are the ultimate adapters, thriving in nearly every possible ecological niche.