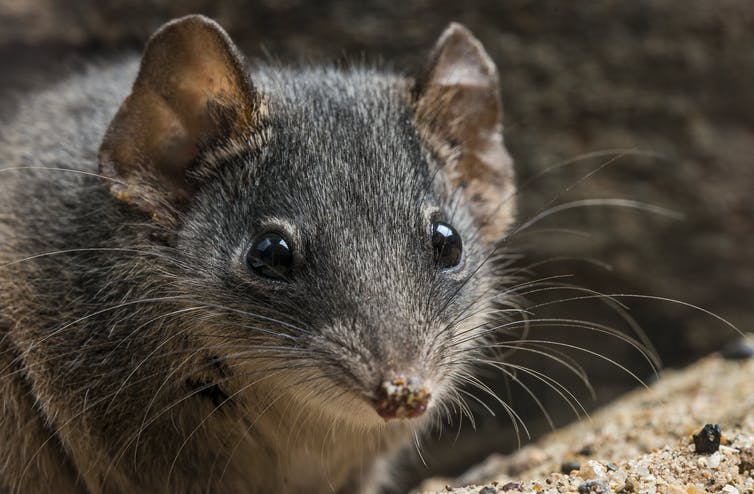 Australia has a rich diversity of mammals, with around 320 native, land-based species, 87% of which are found here and nowhere else. Many of these mammals are secretive, only active at night, and small, weighing less than one kilogram.

Mammals are “endotherms”, which means they must generate their own heat and maintain the temperature within a narrow range. This requires a lot of food.

For small mammals, which have a high surface area to volume ratio, the energetic cost is even higher. This makes them particularly prone to heat gain and loss, putting them in peril every night.

So how on earth do they cope?

Well, there are some advantages to being small. It’s harder to be seen by predators, and there are more places to hide. If the soil type is right, there’s no shortage of cracks and holes to slip into.

Such habitats not only keep small mammals concealed from predators during the day and parts of the night, but the temperature and humidity is also more stable underground, which means they expend less energy in maintaining body temperature.

To further conserve energy, many small mammals will also enter “torpor” — an inactive period that slows down their energy-burning metabolism. Torpor is like a mini hibernation that typically lasts for hours, rather than days.

For small mammals — prone to losing heat and needing to catch and eat up to half their body weight in food each night — having some periods of down-time during energy-conserving torpor can mean the difference between life and death.

In addition to the nightly challenge of finding enough food to maintain a stable body temperature, keep a complex brain functioning and have enough energy to move up to several kilometres, Australia’s small mammals face a host of human-caused threats. These include habitat clearing, climate change and feral predators.

The combined pressures have too often proven insurmountable. With 34 species lost forever, Australia has the worst modern-day mammal extinction record of any country on Earth.

So how can we turn this appalling situation around?

First, we humans must appreciate these unique animals and decide they need to be saved. That requires knowledge and understanding, so let’s get to know some of these mysterious mammals a little better.

Can you imagine a mammal that can weigh less than a ten-cent piece yet leaps five times its own height to bring down prey far larger than itself with persistent, savage biting to the head and neck?

This is the long-tailed planigale, the smallest Australian marsupial and one of the world’s smallest mammals.

They are ferocious predators, and anything that can be subdued is viciously attacked, including large centipedes, spiders, insects, small lizards, and even other small mammals.

They live in narrow crevices of cracking clays in blacksoil plains and move below and above the surface at night in search of food. Here, they run the risk of being eaten by predators, such as owls and feral cats.

Read more: Photos from the field: zooming in on Australia’s hidden world of exquisite mites, snails and beetles

The conversion of grassland to agriculture and cattle grazing causes the soil to become compacted, which also poses a threat to this species.

The little forest-bat is a denizen of various forest types found throughout southeastern Australia.

Its activity depends on temperature — in some parts of southern Australia, during cold periods, individuals may not emerge from roosts for several weeks.

This species feeds exclusively on flying insects, including moths and mosquitoes.

And they’re not considered threatened — unlike most Australian mammals, they appear to be tolerant of disturbance and will utilise agricultural or urban landscapes if no woodland habitat is available.

This is one of four species of tiny native mice that construct mounds of pebbles that comprise conical, volcano-like ramparts built around burrow entrances. This is unique behaviour among the world’s mammals.

The pebble mounds can be large, weighing more than 50 kilograms and encompassing 10 square metres — astonishing constructions given the architects weigh as little as 10 grams!

Mounds are energetically expensive to build. They are a critical limiting resource for eastern pebble-mice because females raise their litters in the mounds and their female offspring tend to disperse only as far as the next available mound. Some mounds may even remain in use for centuries, re-used by successive generations.

The erosion of hills and spread of dune fields in arid Australia are reducing the distributions of pebble-mice.

The famously adorable mountain pygmy possum is the only Australian mammal limited to alpine and sub-alpine regions, where snow covers the ground for up to six months of the year.

The possums may move more than one kilometre each night in search of food, which includes seeds, fruits, spiders and insects. They have a preference for Bogong moths (Agrotis infusa).

They double their body weight prior to hibernation, which lasts between five and seven months. During this time, their body temperatures may drop down to 2℃ for up to 20 days at a time.

This species is endangered, and there may be as few as several thousand individuals in total across three isolated populations.

Their biggest threats include droughts due to climate change, predation by feral cats and foxes, and habitat destruction, particularly after the devastating 2019-20 bushfires razed 15% of the species’ range.

The 15 species in the genus Antechinus are “suicidal reproducers”. All males drop dead at the end of the breeding season, poisoned by their own raging hormones.

This is because the stress hormone cortisol rises during the two-week breeding period. At the same time, surging testosterone from the super-sized testes in males causes a failure in the biological switch that turns off the cortisol. The flood of unbound cortisol results in systemic organ failure and the inevitable death of every male.

But this happens only after they’ve unloaded their precious cargo of sperm, mating with as many promiscuous females as possible in marathon sessions lasting up to 14 hours.

Silver-headed antechinuses are found only patchily in a few isolated populations of high-altitude wet forest in mid-eastern Australia. They eat mostly insects and spiders and are likely preyed upon by owls and feral cats.

The silver-headed antechinus is endangered and threatened by climate change. The species lost almost one-third of its core habitat in the 2019-20 megafires.

Yet, torpor can assist here as well, even after such extreme events. Antechinuses (and other small mammals) are known to use torpor more often after fire, when food is scarce and the risk of predation is higher, as there are fewer places to hide in a scorched landscape.

Read more: Animal response to a bushfire is astounding. These are the tricks they use to survive