Man Without A Country 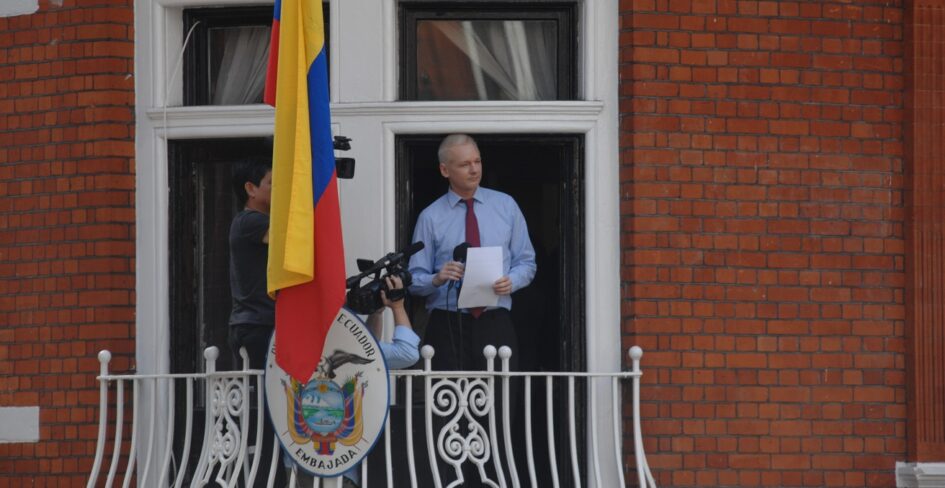 A decade ago, WikiLeaks shocked the world with revelations of US war crimes in Iraq and Afghanistan. How Assange’s popular following was reversed, his reputation trashed, and his health ruined is a saga which is still playing out.

Publisher Julian Assange became an instant celebrity. In 2011 he received the popular vote for Time magazine’s Person of the Year, became Le Monde’s Man of the Year, and was repeatedly nominated for a Nobel Peace Prize. Robert Manne called him the most consequential Australian of the time, and “one of the best-known and most-respected human beings on earth.” Yet, successive Australian governments have refused to intervene on Assange’s behalf, making him, as the New Yorker reported, a man without a country. What happened to him could happen to anyone, and that’s apparently the point the three Anglo-allies want to make.

American politicians, without explaining how an Australian could commit treason against the US, called Assange a traitor and wanted him dead. Both Republicans and Democrats labelled Assange a “high-tech terrorist.” The US closed down internet donations to WikiLeaks. After allegations of rape against Assange by two Swedish women were reported, he offered to be interviewed in Stockholm and in London with no result. Both women withdrew their claims, and the Swedish prosecutors dropped the case, although their UK counterparts pressed them to pursue it.

The British Foreign Office minister, Sir Alan Duncan, called Assange a “miserable little worm” in Parliament. The British media weighed in, calling WikiLeaks a “disrupter” of everything the West held dear, and Assange a “nihilist.”. The title of Alex Gibney’s 2013 mockumentary film, We Steal Secrets: The Story of WikiLeaks sounded like an admission from Assange, but those words were spoken in the film by Michael Hayden, former NSA Director, about his own agency. In step with their American and British colleagues, Australian ministers and media were quick to join the pile-on against Assange, though Julia Gillard couldn’t name his crime. Tanya Plibersek said he had damaged “world security.”

Assange broke his bail in Britain, fearing extradition to the US, and for that he was called paranoid and a coward by his former collaborators in the media. But he knew a grand jury was investigating him – something American authorities denied until charges were filed in Alexandria in December 2017, and a court error revealed it was true. With Assange in diplomatic asylum in the Embassy of Ecuador, the CIA used UC Global, a Spanish security firm, to surveil what he did there, everything he said to his friends and his lawyers, and connections to their phones. As British police dragged him out in April 2019, Assange mouthed to the cameras “I told you so.” Since then, he has been in solitary confinement in London’s high-security Belmarsh Prison, where at least one murder has recently occurred and at least two inmates have contracted COVID-19.

In July 2019, Assange was briskly dealt with in court by British judge Emma Arbuthnot  ̶  whose husband chaired the UK Parliament’s Defence Select Committee, and whose son works for a security intelligence company. Lady Arbuthnot, having already branded Assange a “narcissist,” informed him that “nobody is above the law,” and although his bail sentence had ended, refused to release him. Her junior judge, Vanessa Baraitser, dismissed Assange’s lawyers’ complaints about limited access to their client, his physical and mental condition, and the confiscation of his legal notes.

The extradition process in March 2020 prolonged this legal farce, with the British prosecutor briefing the media in advance of the hearing on what they should report for the evening deadline. US representatives bizarrely argued to Baraitser that Assange was subject to the US Espionage Act but was not entitled to the protection of the US Constitution, and that the UK Treaties Act applied to him but not the US/UK Extradition Treaty. Whatever produces the desired outcome is what the Americans and their British sycophants will predictably continue to say is legal.

The next hearing, expected to last three weeks, has been postponed from May to September, and will be in another Crown Court because of COVID-19 restrictions. No matter how long it takes, legal representations are unlikely to prevent his extradition: the motivation, and the solution, remain political. The slower the process, the worse the prospects for Assange’s health. If he survives, there is some hope a new US president, should the outcome of the pandemic-affected election favour Joe Biden, may abandon the case. But Biden may be worse than Trump: in 2010 the senator wanted Assange executed.

In the decade since Chelsea Manning passed the cache of 740,000 US documents to Assange, she has been jailed twice and released twice. A brigadier-general in the Pentagon has admitted that no one is known to have died as a result of the cables’ publication, names redacted or not, and Australian authorities have made similar statements. For invigilation of Assange in the Embassy by UC Global, Spanish authorities are investigating apparent breaches of the Vienna Convention. An operative who claimed to be working for Equador’s government reportedly discussed having Assange executed. All this should undermine the US case for his extradition, but it may not.

The US is determined to charge Assange with 18 counts of conspiracy and computer intrusion, obtaining and disclosing national defence information without authorisation, and espionage. The trial will be in West Virginia, where most jury members are likely to have ties to defence industries, and the judge, who will come from the same constituency, can impose a total of 175 years imprisonment. This, effectively, is capital punishment.

As the years have dragged on, Assange has been defended by the UN Working Group on Arbitrary Detention, the UN Special Rapporteur on Torture, PEN International, the UK Foreign Journalists’ Association, and British journalists including Robert Fisk, Patrick Cockburn, and recently Peter Oborne, who wrote that the British Foreign Secretary should be “resisting the US attempt to get its hands on Assange with every bone in his body.”

What is lacking is Australian political intervention for Assange in London and Washington, particularly of the kind that produced the release of David Hicks and Mamdouh Habib. Australia often makes representations for its detained citizens in other countries, and Assange, who has been found guilty of nothing, deserves no less. But he has revealed crimes the US is guilty of, for which the UK treats him as if he’s guilty, and Australia presumes he’s guilty of whatever they say. The Assange case is a test of the values and the rule of law which Australian leaders claim is shared with Anglo-allies. The probity of the political and justice systems of the three countries is what’s on trial, and that affects us all.

Dr Alison Broinowski AM FAIIA is an author, academic, and former diplomat.

This article was originally published in the Australian Institute of Foreign Affairs and is republished here under a Creative Commons Licence.