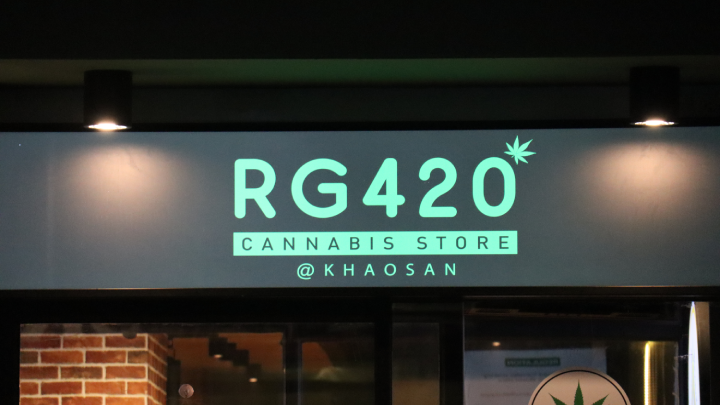 Bangkok’s backpacker mecca Khao San Road has gone through a lot of changes over recent decades. The slick neon-lit bars lining much of the street are a far cry from the more down-home establishments of the past.

But the most noticeable difference today is the addition of cannabis.

Strolling down the centre of the main drag and surrounding areas, one is taken by shopfront and roadside store signs that read, Greenhead Clinic, N’Louis’ Happy Buds, House of Chronic, Cannabis BKK and currently, the most renowned cannabis establishment on the block, RG420 Cannabis Store.

In a bold shift from its former hardline stance on drugs, the Kingdom of Thailand effectively legalised cannabis on 9 June, with the Thai health minister Anutin Charnvirakul handing out one million plants to households, while thousands of inmates detained on cannabis-related charges were released.

The Thai government legalised medicinal cannabis in 2020, in the form of oil obtained on prescription. But with the health minister removing cannabis from its scheduling as a controlled narcotic drug in February, it opened the way for the legal consumption of the entire plant.

Khao San cannabis shop owners will tell you that business is doing well. And while conservatives might fear that the stores may turn into tourist honeypots, the reality is the overwhelming majority of visitors are continuing to frequent the bars to consume the traditionally legal drug, alcohol.

RG42O opens its doors at 4.20 pm every evening and shuts up at twenty past 1 am. As sales supervisor Suntaree Kansrinawakun told Sydney Criminal Lawyers, the point of difference for her establishment is that it’s the only one on the strip that provides a smoking room.

On entering the cannabis café, which operates in conjunction with a licensed grower and only sells organic product, a customer is taken by the large jars filled with buds of different cannabis strains – Thai Stick, Kush, Charlotte Angel and Old Town – available for sale.

The store also sells pre-rolled joints that can be consumed in the smoking room, where tobacco use is not permitted. Edibles are on sale in the form of brownies and chocolate, while there’s a range of cooking products that allow the traditional herb to be added to meals.

But there’s nothing too chronic about these products, as cannabis extracts with over 0.2 percent tetrahydrocannabinol or THC, the psychoactive component of the plant, are banned. And both the buds and products are for medicinal purposes only, with recreational use still officially outlawed.

There’s also a prohibition on smoking weed in public, which carries up to three months in prison or a fine of AUD$1,000, hence the smoking room. And there’s a ban on selling and consumption in relation to under 20-year-olds, pregnant women and breastfeeding mothers.

“We sell cannabis products. We have smoke for relaxation. We have it for eating, and ingredients for cooking. We have joints and flower-buds,” says Kansrinawakun. “My shop is especially about the smoking room because the other places sell at the store, but they don’t have a smoking room.”

The RG420 sales supervisor explains that the “RG” in the store’s name stands for “rak”, which means love in Thai, along with “ganga”: the local word for cannabis.

As for the 420, it’s the date, April 20, that cannabis lovers the world over celebrate the plant, which is a tradition that commenced in 1991, when followers of US band the Grateful Dead organised a pot smoking meet at 4:20 pm on April 20 at Bolinas Ridge in Marin County, California.

Inside the smoking room, it’s not heavy with thick smoke like a similar facility for tobacco use is at an airport. The airconditioned room seems fresh, as a few older local men partake at a table down the back, while a couple of the owner’s friends stand to the side.

RG420 has been open for two months: from a few weeks after the criminal sanctions around the plant were removed. Since then, business has been going well, with both foreigners, or farangs, and locals frequenting the café.

“The government is okay,” Kansrinawakun advises. “Flower-bud is plant, so we can sell it. Customers can buy it to smoke or for cooking. CBD oil is also available for medical use. You can buy and sell cannabis at shops, but CBD oil, you have to go to the hospital and see a doctor.”

The use of cannabis and hemp in Thailand goes back centuries. The plant has been used as an ingredient in cooking, for its medicinal qualities, and as a source of fibre: all uses that are now legal and currently being embraced in Australia.

The 1925 International Opium Convention placed global restrictions on non-medicinal cannabis, which saw Thailand’s second PM General Phot Phahonyothin criminalise the plant in 1937. But it wasn’t until the US Reagan administration applied pressure that it took a hardline stance in the 80s.

The focus of this year’s legalisation process has been on households and businesses embracing it for medicinal use and economic benefit. Households can grow unlimited amounts with a requirement to register plant numbers on the Plookganga app, while licensed farms are springing up nationwide.

Thailand is the only nation in Southeast Asia to have made cannabis legal, but it’s certainly, no global pariah. The nation of Uruguay legalised the plant in 2013, as did Canada five years later, whilst over in the US, recreational cannabis is now legal in 19 states, along with Washington DC.

Australia officially legalised its medicinal cannabis industry in 2016, and it’s been legal to possess and use the plant recreationally in Canberra and the surrounding capital territory since January 2020, thanks to a private member’s bill introduced into parliament by ACT Labor MLA Michael Pettersson.

Legalise Cannabis Australia took out between 2 to 7 percent of the Senate vote in each jurisdiction at this year’s May federal election, whilst Australian Greens Senator David Shoebridge has the national legalisation of cannabis on his political agenda.

According to Kansrinawakun, part of the reason the Thai government moved to legalise cannabis is that after the onset of the COVID-19 pandemic, it’s attempting to encourage tourists back to the Southeast Asian nation.

Indeed, the Thai Food and Drug Administration flagged an idea back in January, to create designated zones where people, both locals and tourists, over the age of 20 would be free to use cannabis recreationally.

As for now, those on a shoestring budget might find the cost of a joint a little pricier than expected, but as Kansrinawakun puts it, “Right now, people say, ‘Why is it so expensive?’ I say, ‘Of course it is, it’s a new business that’s small. When it grows up, it will cost lower in the future.’”

Thailand Legalises Cannabis, Handing Out One Million Plants to Citizens

Cannabis Legalisation in Australia: It’s Only a Matter of Time

Public Demands Cannabis Legalisation, But Government and Big Pharma Have Other Ideas