Freedom Protesters Gather in Brisbane Over State Of Emergency Extension 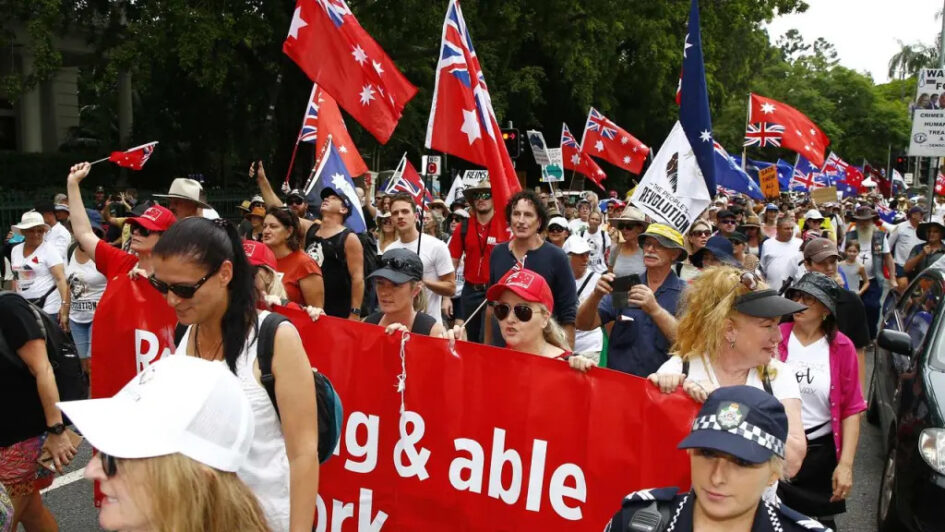 Demonstrators have taken to the streets of Brisbane to protest against the extension of emergency COVID-19 powers.

A three-day event, hosted by The People’s Revolution, gathered outside Queensland Parliament House, expressing their opposition to vaccine mandates and COVID emergency measures.

This piece covers activities from March 15th to March 17th.

Many campers from across the state arrived on Monday, with a smaller event held in preparation.

The group is stationed at Musgrave Park for the entirety of the demonstration.

Another day of action, with demonstrators marching at 8:15am through the city towards Queensland Parliament, allowing their voices to be heard as peak work traffic arrived in the CBD.

A number of messages were sprouted, with some expressing hatred of the government and others chanting “block the bill”.

“Shame on you, Annastacia,” one woman said during a social media broadcast of the demonstration.

“We are the people, we are the power, we are one.”

On arrival at Parliament House, a number of speeches were given, with the crowd once again making lots of noise after discovering their sound activities had ’caused a disruption’ yesterday.

Some members of Parliament came out on the balcony to cheer and support the efforts.

Following a sit-in outside of Parliament, the group continued to march through CBD, heading towards the ABC HQ to let them know what their think of ‘our’ ABC.

The group has since returned to Musgrave Park to further connect and plan for the final day of action tomorrow. If you are in the area, organisers encourage all to come down.Advertisements

Pauline Hanson, Robbie Katter and George Christensen have walked alongside thousands of protesters in the Brisbane CBD to rally against the COVID dystopia on Tuesday.

Protesters descended on the CBD to oppose any extension of Queensland’s State of Emergency Declaration, which allows for mandatory quarantining, movement restrictions, gathering limits, self-isolation, social distancing and the sharing of confidential information for contact tracing.

Pictures show people flying Australian flag upside down – a signal meant to warn people of extreme danger to life and property — amongst a plethora of signs questioning the ongoing agenda.

Crowds gathered outside Parliament House to stage a sit-in, with speeches held and a number of drums and chants used to draw attention from ‘representatives’ of the state.

The group is not alone in their efforts to have the emergency powers scrapped.

“As a community, we have learnt about the impacts of quarantining conditions on people’s mental health, the human rights limitations arising from public health directions that confine people to their homes and the mandating of vaccines,” Mr McDougall wrote in a 12-page submission to the committee.

“The commission recommends this bill not proceed and instead be replaced with comprehensive human rights compatible pandemic legislation,” he added.

The powers were last extended in September.

Health Minister Yvette D’Ath argues the extension of emergency powers is necessary to ‘keep the state safe from any new rapid and unpredictable coronavirus variants’.