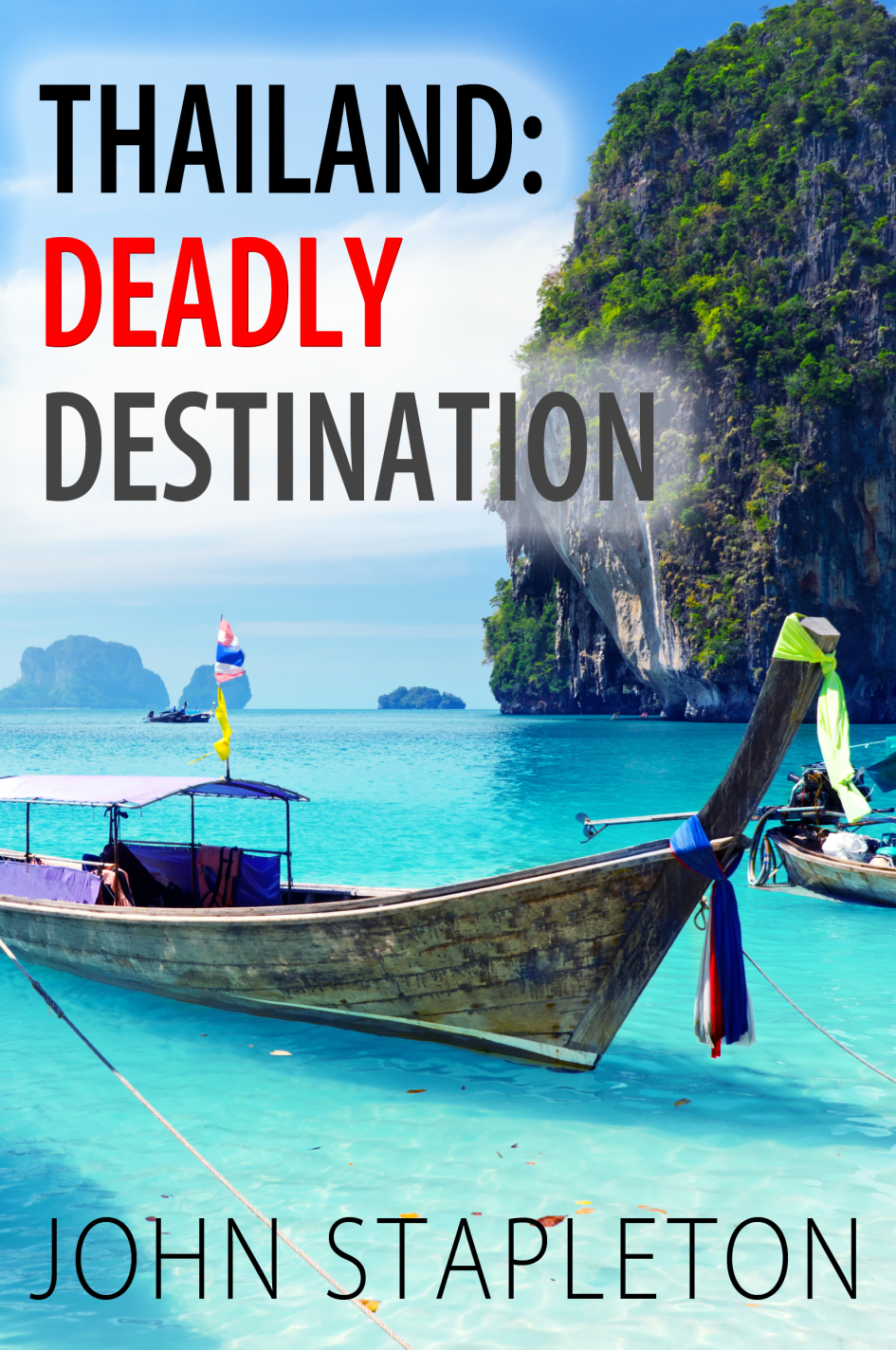 FRUIT FOR THE PICKING

The daily robbing, bashing, drugging, extortion and murder of foreign tourists on Thai soil, along with numerous scandals involving unsafe facilities and well established scams, has led to frequent predictions that Thailand’s multi-billion dollar tourist industry will self-destruct. Instead tourist numbers more than doubled in the decade to 2014. Both the Thai Tourism Authority and the Thai Ministry of Tourism forecast an astonishing 30 million tourist arrivals per annum in 2015 and beyond. The world might not have come to the hometowns of the many visitors fascinated by Thailand, but it certainly came to the Land of Smiles.

While the Thai media is heavily censored, and bad news stories about tourists suppressed, nonetheless there is more than enough evidence to demonstrate that something has gone seriously awry with the nation’s tourist industry.

Thailand’s carefully manufactured reputation for hospitality, as a land of palm trees and sun-drenched beaches, happy-hour bars, world class hotels and welcoming people, as paradise on Earth, is very different to the reality many tourists encounter. The rapid growth in Thai tourism has been a triumph of advertising and image creation; building the perception, firmly entrenched in the West, that Thais embrace strangers. In reality, the relations between ethnic Thais and foreigners are often difficult; and there has been growing friction and disengagement, a drift from curiosity to contempt, as visitor numbers have increased.

Tourists choose one destination over another for a number of reasons, most of which Thailand scores highly on: cultural uniqueness, climate, natural resources and environment, value for money, quality accommodation, modern transport infrastructure, a range of tourist activities and experiences, entertainment, and a hospitable reputation. But since the events of September 11, 2001 safety has been one of the factors underpinning a traveller’s choice of one destination over another.

And on the core issue of safety, Thailand scores very badly indeed.

While many foreigners leave the country happy, there are equally thousands of travellers from Europe, America, Australia, India and the Middle East, both short-time tourists and long-term residents, leaving the country impoverished, distressed, frightened and unlikely to ever return.

If, with the murder or accidental deaths of tourists a common event, they leave at all.

Travel was once the domain of the rich, adventurous and eccentric.

With the growth of mass tourism, the world is on the move. Naive young and not so young travellers are more likely to be factory workers than travellers protected by wealth or experience.

All these individuals know about Thailand is what they have read in tourist brochures or heard from friends. Far from acting as if they’ve just flown half way across the world to one of Earth’s most exotic and dangerous destinations, they act, and dress, as if they were just heading down to their local strip of sand for a surf. Or to their local bar.

Life in Thailand is cheap. And the deaths of foreigners often go unlamented; even unrecorded. Only a smattering of the murders or accidental deaths of tourists and expatriates make it into the newspapers. Tourists are still given few warnings of the reality of the situation they are entering.

Despite the window dressing of a dedicated Tourist Police, and the recent establishment of Tourist Courts, in reality aggrieved foreigners have little or no recourse to justice. Soon enough they are gone, their personal losses swept away in the tides of their personal histories.

Just as tens of thousands of tourists depart the Kingdom’s international airports each day, at the same time airbuses disgorge thousands more holiday makers with only one thing on their minds, to have as good a time as they possibly can.

Only a taxi ride away from the triumphs of functionality and style that are Bangkok, Phuket, Chiang Mai and Pattaya airports lie the nation’s infamous bars, clubs and massage parlours, waiting for the next crop.

“Fruit for the picking,” as the locals describe tourists.

Visitors to Thailand are not warned by travel agents, airlines or their own governments that their passports are highly prized in Thailand, and stand a very good chance of being stolen.

Depending on the nationality, a passport can fetch thousands of dollars on the black market, several months pay for many Thais. There are gangs stealing passports to order. European, American, Australian and Canadian passports are particularly prized.

Foreign embassies, fearful the documents are ending up in the hands of Islamist militants and international criminal networks, have made repeated representations to the Thai government without affect.

But for decades the Thai authorities have done little to stop their country’s blatant trade in stolen, doctored and forged documents. By inaction and complicity, Thailand has become an epicentre for the trade, a key link in international terrorist networks and a danger to the travelling public worldwide.

Forged passports from Thailand are regarded as the highest quality of any in the world.

There is an established practice across the country of bike, car, jet-ski and other rental services requiring passports as collateral. When punters return to claim their documents, they have disappeared.

With jihadist networks one of the main purchasers of fake documents, a perfectly innocent peace-loving tourist can be associated with a terrorist act, simply by leaving their passport as collateral in a hire shop while they are on holiday in Thailand. By their choice of destination, by choosing a country notorious for its lax law enforcement they can find themselves inadvertently contributing to the deaths of others.

No travel association explains this moral dilemma—for exactly the same reason that motivates the criminals on the other side of the ledger, the river of easy money tourists represent.

Not only is the trade in passports and fake documents fuelling terrorism and international crime gangs, it is also facilitating false job applications through counterfeit academic qualifications, bank fraud through the establishment of false identities, and illegal access to restricted areas in various companies, not just at airports.

There are few official warnings to tourists that they can expect zero help from the hire company involved in the theft of their passports, from their hotel, from the local police or from the Thai Tourist police.

Their money might be welcome, but they are not. No amount of protest will bring their documents back. The black money from the stolen passports makes the complaints or distress of a foreigner very easy to dismiss.

There has been no action taken by the police against the hire companies routinely stealing from tourists for one simple reason. The police benefit financially from the practice. Nor have Thailand’s dysfunctional series of governments done anything to stop businesses demanding passports as collateral, or initiated a crackdown on the police and criminal networks involved. The trade in forged documents is not seen as impacting on the welfare of the ultra-nationalistic Thais; and therefore not an issue worthy of action.

Foreigners are forced to go through considerable inconvenience as they get their passports reissued.

Partly a result of the Thai authorities complicity in or failure to act against the trade, international embassies have seen a drain on resources as they assist their distressed and confused citizenry replace stolen passports and readjust travel schedules.

In other words, it is the tax payers in the tourist’s country of origin who are ultimately paying for the well established racket of thieving passports from holidaymakers in Thailand.

Renowned Thai journalist Chutima Sidasathian describes Phuket, with its international orientation and plethora of news stories, as a reporter’s paradise.

While questioning the Phuket police at a press conference about the number of stolen passports being traced to the island after the disappearance of MH370, she was castigated for raising a subject which could damage the reputation of  the island and of Thailand itself.

She declared she was just doing her job and shot back to the senior officer:

“Yes, but what is the answer?”

As she recalls: “There was no answer.”

Indeed, to the charge against the Thai political, military, police, social and business elites of allowing racketeers to trade freely in doctored, stolen and forged passports, along with a wide variety of other false documents, thereby fuelling criminal and terrorist networks and endangering the world’s travelling public, there is no answer.

The pleasure dens tourists so eagerly seek are not safe. And the more travellers relax in the false bonhomie of the bars, the more unsafe they become.

Often drunk or off their guard while on holidays, fooled by the marketing of Thailand, trusting people they should never have trusted, sightseers are not warned of the very high probability of having their drinks spiked, or that they stand a very real chance of being bashed and robbed by mafia run gangs.

A relaxed attitude to prostitution is all very well and good, and despite the moralising from various quarters not a cultural trait to be criticised. But with the inherent dislike and distaste for foreigners, which is a national trait, often comes zero respect from sex workers for their customer’s welfare or safety, and zero respect for their property, at a time or in circumstances when those individuals are most vulnerable. The attitude of murderous indifference to the welfare of strangers is ingrained enough in the Thai psyche for it to justify formal government warnings to the many hundreds of thousands of tourists venturing into the bars and clubs of Thailand on a nightly basis.

It is standard operating procedure in Thailand for the bars and clubs to pay bribes to the local police and municipal authorities in order to be able to open their doors. If a bar, club or parlour does not make this payment in all likelihood they will be closed down. The police are not acting in the best interests of the visitors making complaints for the simple reason that they are being paid by bar and club owners; the commonplace complaints of tourists about being robbed are simply shrugged off.

Those who don’t understand the system, that almost every Thai policeman is on the take and expects to be paid, could well find themselves in jail. Or killed.

One common saying from the locals sums it up: “Bangkok police same same Bangkok mafia.” The saying can be adapted for the whole of Thailand.

The lack of warnings, or education of tourists visiting the kingdom, means that many visitors are under the illusion that there is a legal apparatus and judicial process to which they can turn for assistance. The lack of education on the dangers of Thailand is little more than criminal negligence on the part of the travel operators peddling their wares, and a clear breach of a legislated duty of care on the part of many countries supplying tourists to Thailand.

Tourists are not warned that if they are robbed and bashed in the bars and nightclubs, there is little use complaining to the local police. Indeed, if they persist in their complaints, the tourists may well find themselves being seriously harassed, entrapped, threatened or murdered.

It is a well oiled machine, made possible by the fact that most tourists stay less than a fortnight; are in a country which they do not understand and are powerless to take any action.

The same sex worker that robbed a tourist one day and was the subject of a complaint to the police will be back working at the same club the next night, primed and ready to fleece another customer. For both the police and the bar owners themselves benefit from these robberies. In essence, the bars are running organised gangs of thieves masquerading as sex workers.