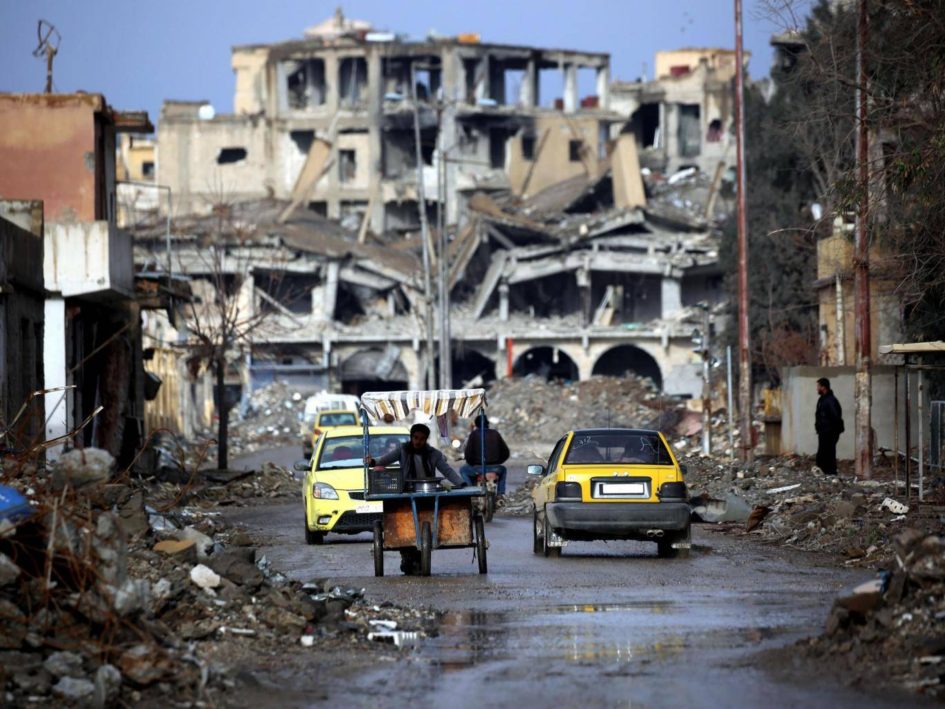 Writing in the UK’s Independent, leading Middle East Eastpert Cascades of broken concrete line the streets of Raqqa. Few people are about and those who are look crushed and dispirited. An 80-year-old woman who says her name is Islim is scrabbling in the debris looking for scraps of metal and plastic to sell. She explains that she is trying to look after the wife and daughter of one of her sons who was killed by a mine.

The Kurdish-led Syrian Democratic Forces (SDF), backed by US air and artillery strikes, captured Raqqa from Isis on 20 October last year after a four-month siege. The destruction is apocalyptic. Houses, hospitals, bridges, schools and factories are gone, turned into heaps of broken masonry. There is no electricity and little water.

“After the war we were at zero and we are still at zero,” says Dr Saddam al-Hawidy. He complains that foreign aid organisations come and look at the ruins of the city, but then leave and are never seen again. The final siege was only the devastating culmination of years of degradation that predates Isis rule. When the much-hated government rule collapsed there was nothing to put in its place. “My father died because the kidney dialysis unit in a local hospital was hit in a Syrian government air strike in 2015,” Dr Hawidy said.

A few districts escaped the worst of the bombing by the coalition, but none are unscathed. Inside the old walled city, we meet Ahmed Mousaqi, a middle-aged former building worker specialising in ceramics, who complains about the high price of buying a minimal amount of electricity from a private generator. He says he survived the siege, though Isis kept herding him and other civilians held as hostages from building to building.

His brother Ahmed, a motorcycle mechanic, was not so lucky. “Isis fighters took over part of his house and it was hit by an air strike,” he says. “He was killed along with five members of his family.” He adds there is little aid available for people like him because as soon as you say you are from Raqqa “they think you belong to Isis”.

Some 150,000 people have returned to Raqqa, though they are not very visible on the streets. A few shops have reopened but there not many customers and business is slow. Beside an ancient ruin called “The Ladies’ Castle”, Basil Amar as-Sawas has a shop selling doors, some of which he makes himself, while others he buys from people whose houses have been badly damaged but they have been able to salvage some of the fittings.He says there is little money around and those who have any are reluctant to spend it while the situation remains so uncertain. Some people whose houses have survived “are selling them to businessmen because they need the money”. He has two small children below school age but for other people the absence of schools – mostly destroyed or badly damaged – is another disincentive for thinking of a return to Raqqa.

Reminders of the grim rule of Isis are everywhere. The tops of the pointed metal railing surrounding the al-Naeem Roundabout are bent outwards because that is where severed heads were put on display.