DIRTY WARS: THE WORLD IS A BATTLEFIELD 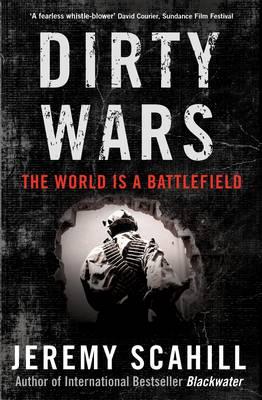 Dirty Wars is story from the frontlines of the undeclared battlefields of the War on Terror. Award-winning journalist and best-selling author Jeremy Scahill documents the new paradigm of American war: fought far from any declared battlefield, by units that do not officially exist, in thousands of operations a month that are never publicly acknowledged. From Afghanistan and Pakistan to Yemen, Somalia and beyond, Scahill speaks to the CIA agents, mercenaries and elite Special Operations Forces operators who populate the dark side of the many wars America is fighting. He goes deep into al Qaeda held territory in Yemen and walks the streets of Mogadishu with CIA-backed warlords. We also meet the survivors of US night raids and drone strikes, including families of US citizens targeted for assassination by their own government -who reveal the human consequences of the dirty wars the United States struggles to keep hidden.

Dirty Wars is the most thorough and authoritative history I’ve read yet of the causes and consequences of America’s post 9/11 conflation of war and national security. I know of no other journalist who could have written it: For over a decade, Scahill has visited the war zones, overt and covert; interviewed the soldiers, spooks, jihadists, and victims; and seen with his own eyes the fruits of America’s bipartisan war fever. He risked his life many times over to write this book, and the result is a masterpiece of insight, journalism, and true patriotism.

—Barry Eisler, novelist and former operative in the CIA’s Directorate of Operations

There is no journalist in America who has exposed the truth about US government militarism more bravely, more relentlessly and more valuably than Jeremy Scahill. Dirty Wars is highly gripping and dramatic, and of unparalleled importance in understanding the destruction being sown in our name.

Dirty Wars is not politically correct. It is not a history of the last decade as seen from inside the White House, or from the pages of the New York Times and Washington Post. Scahill’s book takes us inside Dick Cheney’s famed “dark side” and tells us, with convincing detail and much new information, what has been done in the name of America since 9/11.

Dirty Wars will earn its place in history as one of the most important pieces of literature related to over a decade of failed American foreign policy strategy that continues to exist to this day. It’s also one of the most grounded and thoroughly researched books I’ve read on the subject of covert U.S. operations in the twenty-first century. A must read for anyone that cares about this country and the direction we are heading.

One of the best intelligence reporters on the planet… Scahill has covered the worldwide wanderings of JSOC task forces and their intersection for years, and he takes a deeper look at their expanded post 9/11 mission set. He has incredible sources…

—Marc Ambinder, editor-at-large of The Week

There is no journalist in America, in the world, who has reported on what the war on terror actually looks like under the Obama administration better than … Jeremy Scahill. His amazing, comprehensive chronicle of the Obama war on terror [is] the new book Dirty Wars…. A film, which is incredible and a must-see, of the same name will be in theaters in early June. Dirty Wars is probably the most comprehensive account to date of what America’s global battlefield looks like, a battlefield that was constructed with each new mission and the deployment of special forces and each new drone strike and each new frontier, the product of hundreds of individual decisions made under duress in reaction to an uncertain world that now add up to a global battlefield without frontlines or clearly marked boundaries… This book is an unbelievable accomplishment. The movie is an incredible accomplishment… Whatever your politics, you should read this book. It is incredibly carefully reported book. People who come to this book expecting a polemic, I think will be surprised to a find a book that really in many ways lets the facts speak for themselves. What this book does is show a side of our unending wars that we haven’t seen…. I think every member of Congress should read this book.

Jeremy Scahill is the National Security Correspondent for The Nation magazine and one of the world’s foremost experts on privatized warfare. He is the author of the international best-seller Blackwater: The Rise of the World’s Most Powerful Mercenary Armyalso published by Serpent’s Tail. He lives in Brooklyn, New York.

A Sense of Place Publishing, Dirty Wars, Jeremy Scahill, The World is a Battlefield