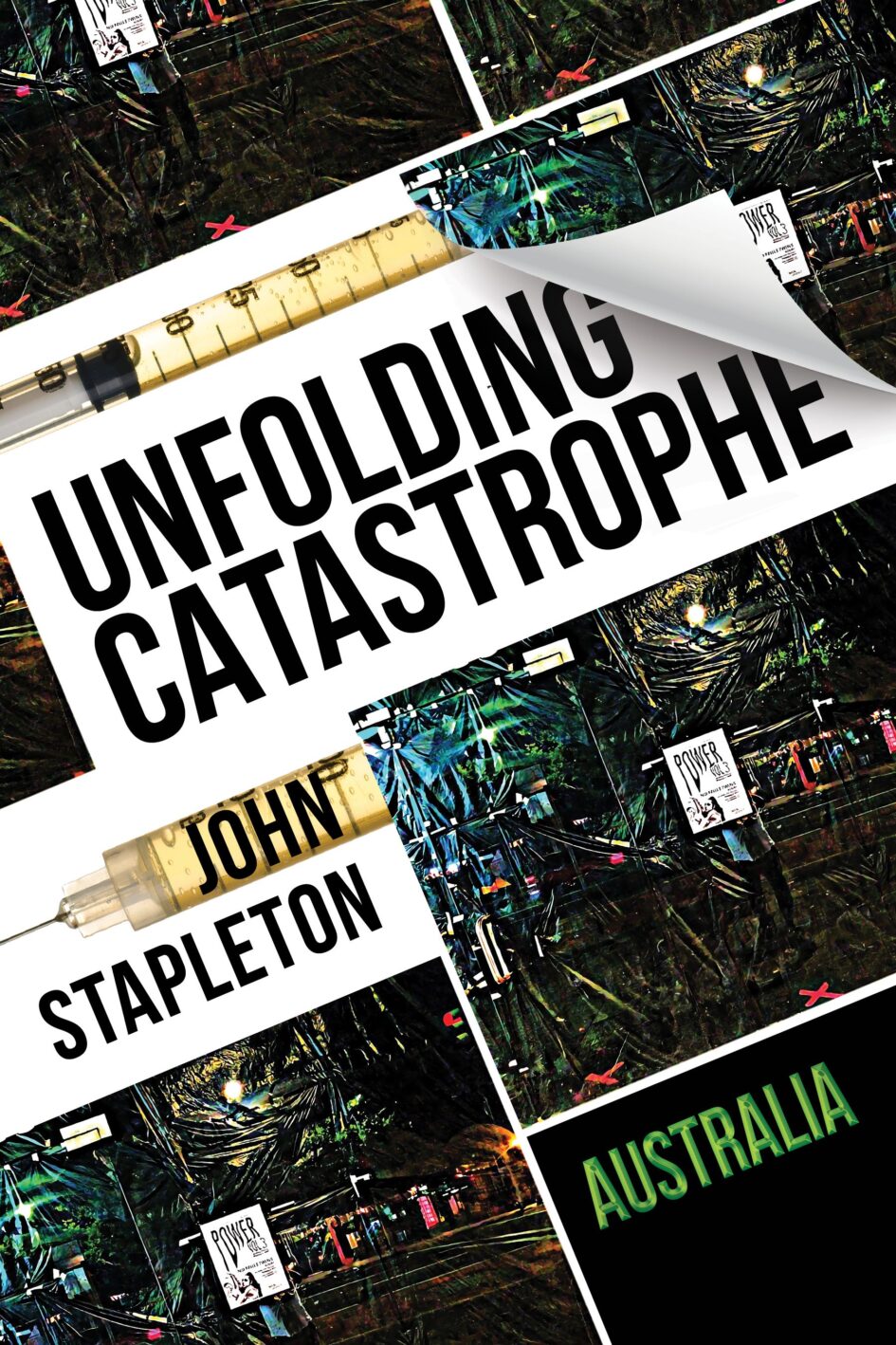 For Old Alex, on the cold but picturesque south coast of NSW, it was an entirely inflamed time.

The Land of the Long Weekend was being destroyed. The population accepted it all as one bizarre edict after another flattened them against a wall inside their own homes.

In Oak Flats, a kind of banishment from all the urban intensities of his past, Alex watched the birth of angels and demons, there in the fluid air and the startling cold of the lake.

The dreams would not leave him; an urgent messaging from afar.

But many spoke of the intensity of their dreaming, there in that darkening clime.

Here among the winters, on a planet so fecund that the gods had fought over it for millennia, the spirits, in reality extremely complex algorithms operating in a swarm, moved across waters and swept affection aside.

He made as if to follow. A dark shore lapsed and guzzled, and everything was alive.

And then in the torrents, we came to feel for you. All of destiny was wrapped around these places, and we were fought through, courageous, determined, of supreme power. All to sweep this stinking government aside, those who prayed and yet were greedier than the most venal of local landlords.

We held you in contempt. We would eradicate you from our Earth, you who speak in our name and yet know us not. We bear witness to your shame. Begone from our sacred place!

They were his strange dreams. Everyone had their own.

Old Alex was in Saigon in early 2020 when the “pandemic” first began.

There was no trouble leaving the country. He was not temperature-tested or asked any questions on his return.

Back in Australia, he went to a local medical centre and asked to be tested. They made it clear it was all too difficult. Not long after, the government started begging people to be tested if they had the slightest symptom.

Barely three weeks before, he had been in the densely packed streets of the famously beautiful city of Hoi An for Vietnamese New Year. Some of the Chinese tourists wore masks, but not many.

On the way to the hospital to greet the arrival of his first granddaughter, he got himself temperature-tested at a chemist, his blasé attitude turning to concern.

With mother and child doing well and even the infinitely proud father calming down, he returned to the barren cold of his cloister.

There was a torrent on the water surface but Old Alex was hidden deep in the matting on the bottom of the sea. That’s the way it felt. There was a tumultuous effect. There was a spiritual derangement. There were many threads to the story.

A dipsomaniac old friend from the 1970s was cheerfully drinking himself to death with a bottle of cheap sherry and a bottle of cheap rosé each day in regional Queensland. It seemed a good idea to catch up before it was too late.

His original plan had been to come back to Australia for the birth of his granddaughter, check up on an elderly parent, and then head north.

And then he would catch a plane and head back off into an exotic life.

None of it came to pass. COVID disrupted his life just as it disrupted everybody else’s.

Aware, all too aware of the extended consequence and the not always welcome interest his work was attracting, an ex-army acquaintance told him bluntly: “Put your best foot forward.”

The same ex-army officer to whom, one pissy afternoon when questioned about the seemingly fantastical circumstance, he had confessed: “We are biological weapons. I am not the only one.”

There was a fantastical element to it all; between the tricked-up grandees of American intelligence who thought they were the evolution of the species and the ancient intelligences which had been here before the species was even born.

As if a dark history was flowing over all of them.

A flash in the eyes which Alex thought he fleetingly recognised, a kind of precognition, was in fact just that classic Australian response to perceived madness: “We’ve got a live one here!!!”

But the former army officer, privy to the sleepy nature of the suburb and friends with local law enforcement, was also the one who had previously told him: “You’re under surveillance.”

And was now telling him, as he swilled another beer and dreamed of wild escapades:

“Nobody can work with you like this. You need to put your best foot forward.”

That odd exchange in a suburban backyard, with “Gay Phil” and Ben the tiler and Knucklehead the ex-army officer, in the midst of those early months of the pandemic when government messaging had everyone scared witless, was the beginning of a whole new fantastical circumstance.

Phil, normally a fixture at the pub, had been diagnosed with terminal cancer and was facing death without his usual gaggle of beer buddies

His friends had collectively decided it was worth the risk just to get together; to provide some company and human interaction to a dying man.

Even on that day, they all worried that if they were seen outside the front door together at once they would be breaching lockdown restrictions and could be arrested.

That’s a lunatic Australian Government destroying the nation. In a quiet suburban street in a non-event, nonplussed at any political complexity blank stare kind of place, a pedestrian suburb where nothing much ever happened outside the inevitable rowdy crew. But even here a truly incompetent government was controlling their every move.

Right down to whether or not they could see a dying friend.

In a district where there was not one single, solitary, active case.

Photographs by the author picture a burn off near Barren Grounds Reserve in the Southern Highlands of NSW.