Commute: The Black and White Photography of Russell Shakespeare 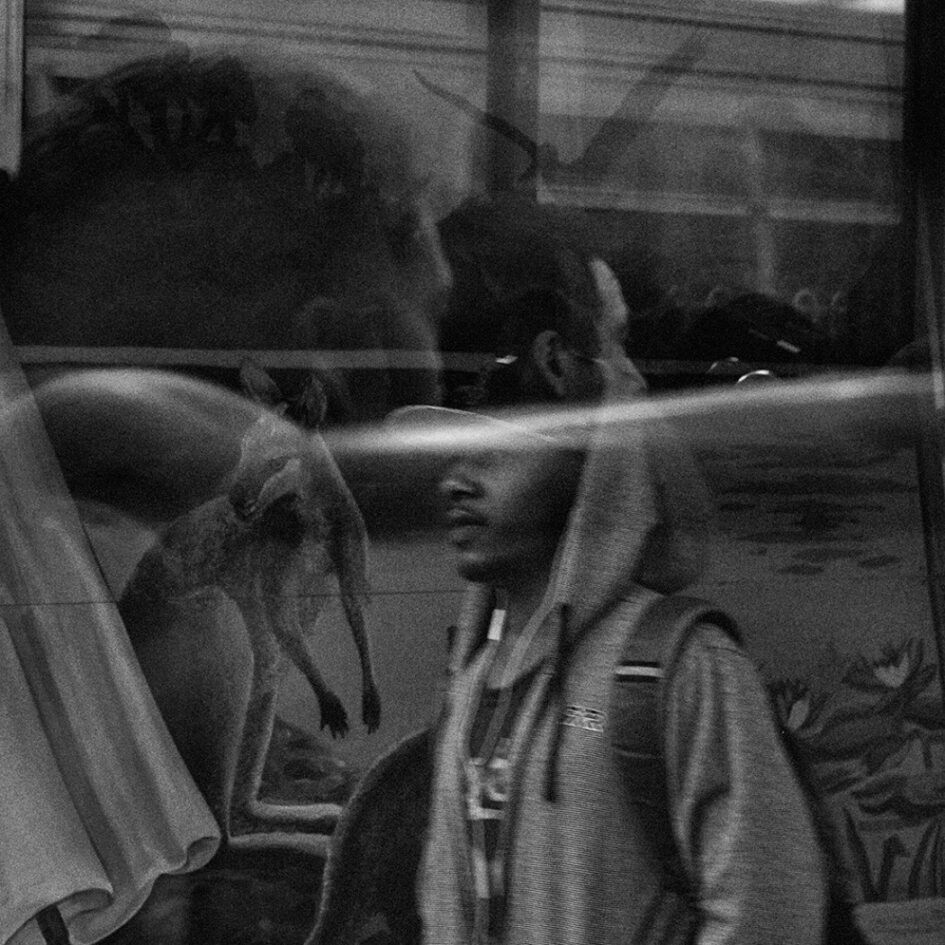 His professional work, while at times a fascinating high pressure roller coaster ride, has its decided restrictions.

This series explores the artistic side of one of Australia’s most accomplished lensmen.

The Commute series of photographs has been captured on his phone.

In my working life, I carry too much equipment.

When I am on the train or travelling I like to keep it simple, one camera and one phone.

All the images here are very random, I am mostly reading a book and every now and then I look out the window and if there is a image I take it, if not, back to my book.

We Are All Just Passing By

There is often a strange fantasy relationship with people you never speak to; as if you know who they are, how they live, can feel their dreams.

And then they are gone, the train on the move once again.

STRANGER, if you passing meet me and desire to speak to me, why should you not speak to me?

And why should I not speak to you? Walt Whitman.

It doesn’t matter which side of the tracks you’re from, the train still rolls the same. Robert M. Hensel

The underprivileged make for easy pickings.

They are harassed by police, sniffer dogs, station managers. They may not have the money for the fare. They may be carrying small amounts of marijuana. They are vulnerable because they are outside.

The rich don’t travel by train.

They gaze from their cushioned cars at a world they have no desire to understand.

I fly like paper, get high like planes
If you catch me at the border I got visas in my name
If you come around here, I make ’em all day
I get one down in a second if you wait

Be good. And if you can’t be good do no harm. And if you can’t shut up, we will never succeed. Do not spill secrets. Do not explain. Let the mundanes drivel back into the Earth where they belong. It is no longer their season. Not in this Dark Forest.

Imagine a dark forest at night. It’s deathly quiet. Nothing moves. Nothing stirs. This could lead one to assume that the forest is devoid of life. But of course, it’s not. The dark forest is full of life. It’s quiet because night is when the predators come out. To survive, the animals stay silent.

Is our universe an empty forest or a dark one? If it’s a dark forest, then only Earth is foolish enough to ping the heavens and announce its presence. The rest of the universe already knows the real reason why the forest stays dark. It’s only a matter of time before the Earth learns as well. Yancey Strickler.

You think and read the craziest stuff on trains. I like it.

Dreams of the Conquered

For a large part of my 11 years working for Q Weekend in Brisbane, I would commute to the head office in Brisbane 100 kilometres from where I live.

The series of photographs started happening after the first two years. I got to know the stations, the time of day. It got to the point where I knew the stations so well I would be ready.

I knew at Loganlee Station, a real melting pot of a suburb — where the kangaroo mural is featured in a number of these pics — that at a certain time of day there are these incredible shadows. They run off this particular bench.

I would sit in the same seat in the same carriage and it would bring me in front of that particular chair at Loganlee.

A sharp light would run across this seat. And it would always be fascinating who would walk in or out of this particular shaft of light.

The Unexpected The Unexplained

For me the train would always be the time when I would get all my reading done. I would go through 30 or 40 books a year commuting.

It was the moment I just wanted to be by myself. I didn’t want to talk to anyone, or be interrupted.

On one particular afternoon I had 70 pages to go in my book and I knew that would get me home.

I sat down in my seat. Two stations in this guy, some sort of addict, sat down next to me and wanted to start a conversation. He was full on.

So I said ‘hi’ and went back to my book but he wouldn’t shut up. Then he started pulling at his hair, pulling out clumps. The hair was falling at my feet. He wasn’t talking to me while he was doing this.

Then he turns around to me and says ‘mate, I want you to punch me in the head. Have a go. I bet you can’t. I am a martial arts expert.’

He just went back to pulling out his hair.

And I went back to reading The Old Man and the Sea.

When people are in the train or waiting for a train they are completely lost in their own world.

That is one thing I try to capture, and it is easy to capture because they are in a state of transit, almost a trance.

Humans are creatures of habit.

I completely see myself as a creature of habit too.

So I used to catch the same train every morning.

There was a man, very tidy, formal, nothing out of place, I would see every morning.

I used to call him the carrot man, because I knew within 30 seconds of sitting down he would pull his lunchbox out and there would be a carrot inside.

And he would bite into, “crunch”.

I got so familiar with crunch that in the end I decided I couldn’t stand the ordinariness of it anymore and changed carriages.

People don’t dress up to get on a train. They act, often, as if they are at home. They are not impressing anyone.

The conversations, you hear the most intimate stories or terrible breakups. What people are having. Marital squabbles.

Everything is played out on trains, the ordinariness of life.

The other thing about the train I got, it was the train going to the international airport, so you would also have these people’s great anticipation against the blandness of everyday life.

They’re on a ticket out. Most people are just going to work or returning to their not always happy domestic situations.

We Seeped Yet Further Into the Wider World

If a train doesn’t stop at your station, then it’s not your train.

I’m always interested at how people travel and what they travel with on the train. For myself I am carrying a camera bag, and I guess that is my world.

They do all their shopping. Prams. Babies. Trying to control young children. Lots of moms.

Loganlea, there is a hospital right next to the train, that is one reason why it is such a busy station.

There is a juggling act, travelling with families.

You’re either on the train because you don’t have a car, or can’t afford a car, or you hate the traffic. On that 100 kilometre stretch I used to take daily you would get mix of Australians.

It’s like you could be anywhere in the world. Loganlea is a mix of international communities, so there is a big African community, Pacific Island community. It is a slice of the world which politicians largely don’t notice — except perhaps at election time.

But it is the world in which most people live.

A journey is a person in itself; no two are alike. And all plans, safeguards, policing, and coercion are fruitless. We find that after years of struggle that we do not take a trip; a trip takes us.

Each day around the world people commute, flee, return, and reconsider where they are or where they want to be. Movement is a condition of the arc of human subjectivity, of ancient history and contemporary life. The existential question, “Who am I”, gets recalibrated, “Where am I, where have I been, where am I going?” Philosophy, Travel and Place: Being in Transit.

I became fascinated by reflections in the train windows, because you could see an interior and exterior landscape, if you will, at the same time.

I like that moment where somebody is on their way home, into their domestic sphere, which one can only speculate about, and at the same time others are still heading towards their fate, good, bad, ugly or just plain dreary. A lot of these people’s lives are writ large on their faces. And they have no idea.

Commuter-one who spends his life In riding to and from his wife; A man who shaves and takes a train, And then rides back to shave again.

The Commuter by E.B White.

The Muffled Decency of an Ordinary Day

Each day is a little life: every waking and rising a little birth, every fresh morning a little youth, every going to rest and sleep a little death. Arthur Schopenhauer.

One of the great things I love about the commute is that it is the above quote completely — everyday life in all shapes and forms. People just going about their business.

At the end of a day everybody just wants the trip over and done with.

If you’re not in an officially designated quiet carriage it is a constant drone of people’s conversations, music. The smartphone has definitely taken the peace out of travel, and the conversation.

People rarely talk to random strangers like they used to.

They have something in common, they are being lulled into some kind of trance by the movement of the carriage, but now they remain in their solipsistic worlds, playing games, scanning Facebook, checking Instagram, SnapChat, gossiping and joking, but it’s all in silence. Except for the occasional chuckle, or sometimes people just burst out laughing for no reason that anyone around them can fathom.

The train is a small world moving through a larger world.

I like trains. I like their rhythm, and I like the freedom of being suspended between two places, all anxieties of purpose taken care of: for this moment I know where I am going. Anna Funder.

All images are copyright to Russell Shakespeare.