Cockatoo Island: The Story Behind the Story 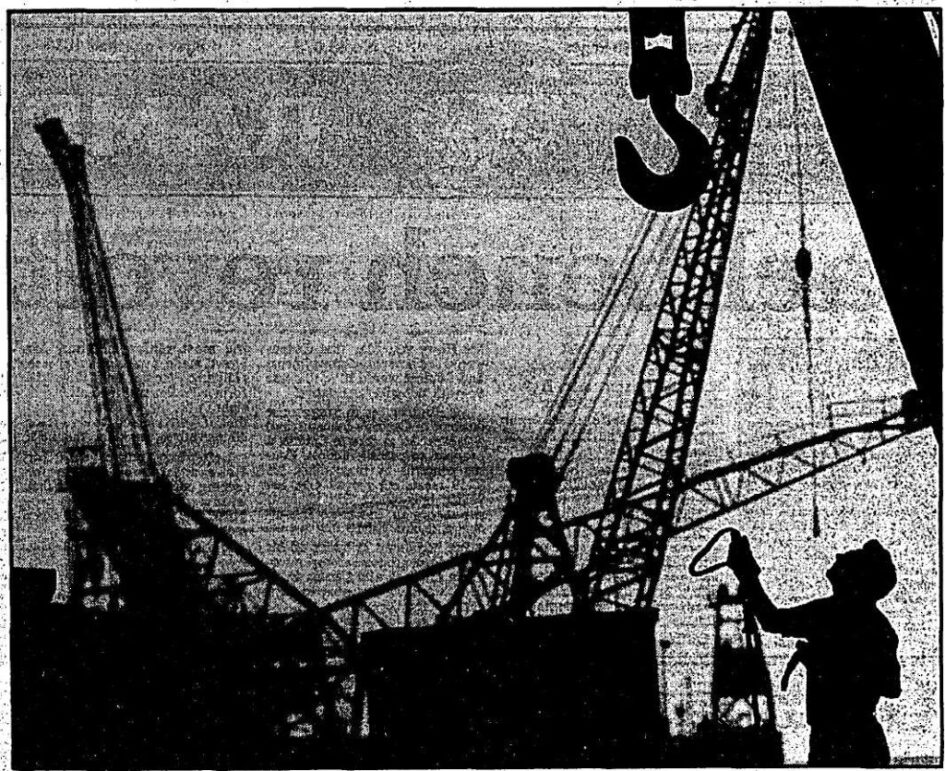 It was an honour to be appear in The Sydney Morning Herald again, under a piece headlined: From the Archives, 1991.

Curiously, there was a story behind this story; and of all the many hundreds of stories one does as a general news reporter, this was one I never forgot.

The head and strap read: “Show me the ropes. 30 years ago, history went under the hammer at Cockatoo Island when the contents of the former navel dockyard went up for sale. Many buyers got a bargain, but some conservation groups were disappointed.”

You can see the original here.

Now it is better known as the site of the Sydney Bienalle.

What a wonderful exhibition space, audiences say, as they wander between the ample warehouses.

Time washes over all of us, places take on new histories, but I long regarded the entire escapade as a travesty.

This island could so easily have been the single most superb industrial museum in the country.

Set in the middle of Sydney Harbour, Cockatoo Island had been a centre for ship building enterprises since the  earliest days of the colony.

There were still the holes in the ground where convicts were thrown for months or years of isolation. The giant, atmospheric warehouses held the history of industrial advancement, with some of the machinery dating back to the 18th Century. Girlie posters still hung in the kitchen areas.

The Labor Party was in power at the time.

And the political party purporting to represent workers oversaw one of the worst cases of the pillaging of the industrial and working class heritage in Australia’s history.

But to the original story, Show me the Ropes:

“The auctioneer’s voice echoes beneath the high ceilings while the dealers, the crafty old codgers and the simply curious mill among the banks of machines.

“As the last dock workers look on sullenly, Cockatoo Island is going up for auction, with more than 5,000 lots for sale.

“Much of the large machinery which belonged to the Commonwealth Government has been taken to shipbuilders in Western Australia.

“Nearly everything else is for sale, with no reserve prices, including lathes, borers, overhead travelling cranes, office furniture, hundreds of metres of rope, a hydraulic chain-tester and pneumatic hoist.

“Many commented that the spirited bidding was an indication of the economy, because few firms could afford new equipment.

“Auctioneer Mr Storm Jacklin said bidding had been stronger than anticipated, with about $1.4 million in sales.”

There was a story behind that sentence “As the last dock workers look on sullenly”, which I had written earlier in the month in a piece titled “Scavengers ready to pluck this Cockatoo dry“.

That story read in part: “Cockatoo Island is entering one of the saddest parts of its turbulent history”.

“Once a convict prison renowned for its cruelty even by the hardened standards of the day, it is now little more than derelict.

“Where once more than 2,000 or more men worked, fewer than 100 are now cleaning up the shipyard for a giant auction at the end of the month.

“The site is a hoarders dream. Dockets are being put on more than 4,000 lots.

“There are piles of almost everything imaginable: hundreds of welders, chain blocks, wrenches, vices, gauges of every description. There’s an old steam train, six old safes, a dozen gumboots, trestles, tables, lockers and pile after pile of old rope.”

But away from the hype of the auctioneers, the remaining workers told a different story.

“While Cockatoo Island is a bonanza for collectors, the remaining workers sum up their feelings in one word: sad.

“The workers who remain have seen almost 1,900 of their colleagues go off to uncertain futures.

“For many who stay cleaning up, their sadness barely covers their anger, for they feel the closure was a purely political decision.”

Workers went on strike in 1989 in an attempt to get the government to reverse its decision.

Gary Lawrence, 47, who had worked at the dockyard for 11 years, was staying on only until the auction was over.

“When that is over it is the end for everybody,” he said. “It is a shame. At one time there were three to four hundred apprentices here every year.

“I am saddened. I have seen a lot of good men go. Some have got work, some haven’t.

“There is a lot of anger over the closure, a real lot. I know men who have been Labor all their lives, and they didn’t vote Labor last time and it will be a long time before they do.

“It has broken people’s hearts. It is wrong, just wrong.”

As mentioned, The Labor Party was in power at the time.

And the political party purporting to represent workers oversaw one of the worst cases of the pillaging of the industrial and working class heritage in Australia’s history.

Kim  Beazley was the most prominent of all politicians from Western Australia, a former Defence Minister and at that point Minister for Transport and Communications, later to be Australia’s ambassador to the US and one in the endless conga line to excuse or support Australia’s endless obeisance to America’s wars. He is now Governor of Western Australia.

From what I could tell, he seemed to think it was all a jolly good show.

I remember calling his office. I got nowhere. Of course. Beyond the official line.

My respect for Beazley has been non-existent ever since.

He could have stopped the ransacking of one of Australia’s greatest, most beautiful, most historically rich and industrially tapestried pieces of architecture and landscape in the country

These people are barbarians. They sop up public funds. They preen themselves, in front of everybody, And they have betrayed their heritage, their voters, their own ideological genealogy.

Much of what was sold off that day was shipped straight to Beazley’s home state of W.A., on the other side of the country.

Straight to Beazley’s mates. Well, that’s how I felt at the time.

All of these things, these jobs, are time dependent. What can be written is entirely dependent on the time available. And who picks up the phone when you ring them. How many views, how many dissenting voices, how much, in a sense, truth, can be provided in a story all depends on deadlines. I got back to the office from this job around four p.m.

I ran around the few prominent heritage architects working in the Sydney at the time. Almost none of them were in their offices. Try as I might, I couldn’t get the quote that I was looking, that what we were witnessing was a travesty, an absolutely disgusting desecration of the city’s history.

But I did manage a couple: Stephen Davies, conservation director of the National Trust, said: “It seems crazy to be selling these things, many of the items which we know are significant. The whole way the sale has gone on threatens the integrity of the site.”

Industrial archaeologist Mr Carl Doring also said he was very disappointed: “The list of equipment for sale contains a lot of items of likely historical significance. To me the sale is too rushed. Cockatoo Island is also a site of industrial heritage which would go a long way towards increasing the public’s appreciation of work and the work ethic. “

Sometimes, decades on, I’ve mentioned to people, mostly kindly, mostly well intentioned, as their lives flow past in flash phrases, what a travesty of Sydney’s life, Sydney’s history, has been Cockatoo Island.

Most often, they look blandly beyond eye-to-eye contact. They have no idea what I am talking about.
It’s a fabulous place for Sydney’s Biennale, they will tell you. So much exhibition space. Those large warehouses. Perfect for installations.

I was very disappointed in this story, because it could have been so much more.