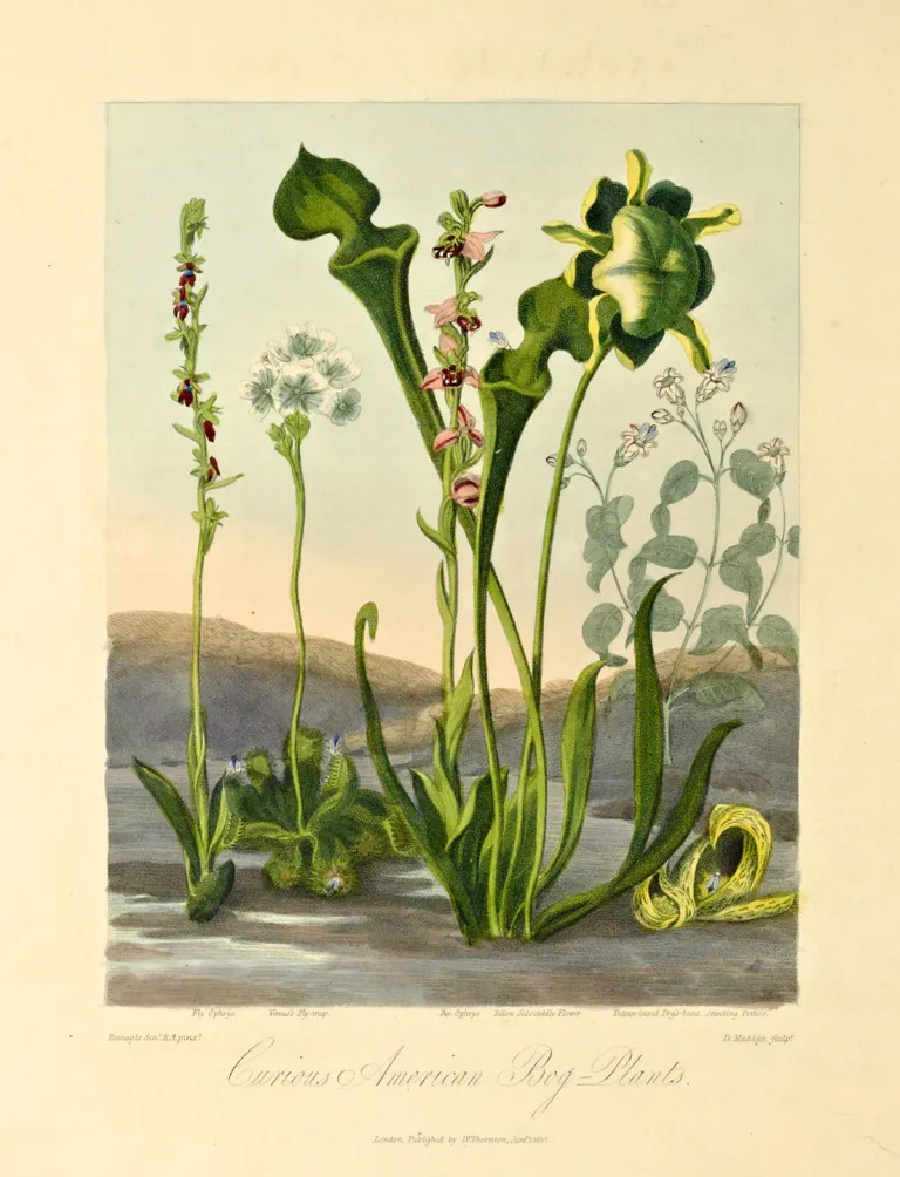 By Paul Collits: Illustrations from The Temple of Flora.

Mass vaccination and the creation of the social circumstances which make it possible has always been a left wing project, witness America. In Australia, the conservatives have destroyed themselves on the same altar. Here Paul Collits, one of the most cogent and acerbic political commentators of the 2020s, pins down the Conservatives destruction of their own credibility. Fasten your seatbelts, the ride is about to get even bumpier.

No-vaxx Djokovic is in the news, yet again.

The tennis great was, infamously, excluded from the US Tennis Open by the barely coherent US President, on the grounds of his Covid unvaccinated status.  One of the fittest, healthiest individuals on God’s earth was deemed a threat to the health of Americans.  Tennis greats like John McEnroe called this nonsense out.

Even more infamously, Djokovic was excluded from the Australian Open last January, courtesy of the then Minister for Immigration, one Alex Hawke.  Now, mercifully comfortable at the bottom of the dustbin of history.   Factional warrior Hawke’s main claim to fame is to have triggered the NSW Liberal Party, or, at least, some of the few remaining people of principle within that organisation, to taking Scott Morrison to court over his electoral shenanigans.  Captain’s picks, and all.  And his exclusion of a tennis great from Australia.  Quite the legacy, Alex.

Now the question of Djokovic’s of status in relation to the next Australian Open has surfaced.

This plays directly into the Liberal Party’s re-thinking of its role in creating and sustaining the Covid State in Australia.

With recent Liberal rumblings over the Covid lockdown and vaccine mandate regime activated and maintained by the Liberals when in government, one might have expected some liberalism (and guilt) to have emerged.  One Dan Tehan opened up and expressed some second thoughts, as well he might.

But now Tehan is the Shadow Minister of Immigration.  Let the dissembling begin.  Let the corporate fealty to the Liberals reign.  Here is Tehan-speak on Novak Djokovic and his chances of competing in the next Australian Open.  The Sky News headline reads:

Dan Tehan has welcomed news that Novak Djokovic wants to return to Melbourne for the Australian Open, but continues to push protecting the “integrity of our immigration system” after his government gave the tennis great a three-year ban.

Mr Tehan told Sky News Australia that although he’d love to see Djokovic return, the “integrity” of Australia’s borders needed to be the utmost priority.

“As a tennis lover, I’d love to see him there… But the most important thing here is that we protect the integrity of our immigration system,” Mr Tehan said.

“The rules about coming into Australia have changed, you don’t have to be vaccinated anymore.

“If they decide that he can come, they’ve got to do so in making that decision in a way to protect the integrity of our immigration system.”

“It was the right decision because there were requirements that needed to be met for him to enter the country,” he said.

It was the right decision?  Only a fool could attempt to make this claim.

What the hell is the “integrity of our immigration system”?

Novak’s exclusion from the 2022 Australian Open, was on political, not medical grounds.  It was indefensible.  Everyone knows this.

How could it have been on medical grounds, since the Morrison-driven vaccines have been proven to have been false advertising, at best, industrial manslaughter at worst?  The vaccines were and are unnecessary, experimental, dangerous and ineffective.

Tehan surely knows this.  Everyone else does, for heaven’s sake.

On the evidence of recent statements, we thought that Tehan might have been someone who might have been in the vanguard of the mea culpa class.  Seemingly, not so.  There is a limit to truth telling in Liberal politics.

No, the stakes of self-protection are high.  The Covid State comprises crony capitalist deals with Big Pharma, deals with the corporate media, networks of protection, investment in “moving on”, and projected belief in the rightness of its evil actions.  The Liberal Party is, clearly, still invested in the Covid scam.

The Liberal Party’s reputation is too big to fail.  So long as they know, the disaffected have long memories and retain considerable anger.

Liberals still do not get it.

With apologies to Oscar Wilde, to have one former Liberal Minister say something pathetically inept, self-serving and deceitful might be regarded as a misfortune.  To have two do so within twenty-four hours looks like carelessness.

The subject, again, tediously, is Novak Djokovic’s absurd, wicked and useless denial of entry to Australia.  Mercifully, the Liberal butt-covering dills who kept him out in 2022 are now languishing on the opposition benches, where they might well stay for quite some years.

First, we had Dan Tehan making the absurd claim that Djokovic should be prevented from entering Australia in January 2023 to play tennis, on the grounds that the Australian immigration system’s integrity was at stake. What integrity?

Now we have Karen Andrews, former Home Affairs Minister, weighing in.  Ludicrously, Andrews briefly considered running for the Liberal leadership following the recent election.  We dodged a bullet there.

The Shadow Home Affairs Minister said it would be a “slap in the face” if tennis champion Novak Djokovic was granted a visa to play at next year’s Australian Open.

The Serbian tennis player was banned from entering Australia for three years after his visa was cancelled and he was deported in January, but has reportedly shown interest in playing at next year’s tournament.

Karen Andrews, who was Home Affairs Minister at the time, said he should not receive special treatment.

“It would be a slap in the face for those people in Australia who did the right thing… if all of a sudden, Novak Djokovic is allowed back into the country, simply because he is a high-ranking tennis player with many millions of dollars,” she said.

Should vaccinated Australians – diminishing by the minute if “keeping up to date with your vaccines” is taken as the definition – feel insulted if one of the world’s greatest tennis player comes Down Under in January to play in the Australian Open?

If so, why should they feel insulted?

There was never a medical reason for excluding Novak in 2022.  Fact.  Covid vaccines do not, and never did, prevent the spread of the virus.  Healthy people don’t spread Covid. Never did. Those at risk of catching the virus and suffering harm were only ever the very old, the frail and those with co-morbidities.  Not too many, then, among elite tennis professionals.

The Liberal Government knew this, of course.  The Government simply didn’t want anyone to notice that its own vaccine madness had no basis in medical science.  If there were no medical grounds for excluding Djokovic, the reasons must have been otherwise.

If the Government didn’t know that Novak’s entry into Australia posed no threat then, Andrews must know it now.  If not, she is simply not keeping up with Covid developments. With real science. The official science is what which she probably feels she needs to defend.  She is lying.  There is now incontrovertible evidence that international lockouts did nothing to prevent the spread of Covid.  King Canute cannot stop the spread of viruses. Nor can Karen Andrews. Nor can Border Force.

To make a case, Andrews needs to demonstrate that the Covid zero madness advanced by her Government was the right policy. Naturally, she doesn’t do this. She cannot. And naturally, the $1.2 billion government funded Australian Broadcasting Corporation did not press her.

The mercifully departed Immigration Minister at the time admitted that the exclusion of Djokovic was about optics, not health.  The Morrison Government didn’t want to have in Australia one who might be seen as an anti-vaxx poster boy.  They had to maintain the false narrative, at all costs.  The real fear of the Morrison Government was that its Covid narrative, underpinned by the vaccines-as-get-of-political-jail-free card, might be compromised. Might actually be noticed. Questioned. The big oops moment must never, ever happen. Letting Djokovic in looked like a defeat. This was, and remains, a sickening indictment of the Liberal Party.

Karen Andrews’ latest, pathetic attempt at narrative-protection clearly demonstrates the Liberal Party’s core ongoing game plan. It is to protect its grim Covid legacy at all costs. “We saved lives”. It has no basis in logic or morals or evidence. It should sicken those who are vaguely embarrassed at the utter abandonment of rational public health policy and humanity.

What should vaccinated Australians make of Andrews’ latest blunder?

Vaccinated Australians might ask, what about the promise of protection from the vaccines against Covid? What of the promise of safety? In view of all of the vaccine deaths and injuries, even among the vaccinated? What of the recent abandonment by all governments of Covid restrictions, despite the ongoing presence of the virus and the continuing deaths? What of the lockdowns? The vaccine mandates which still keep many out of their jobs?

Just blame Novak Djokovic. Deflect. It saves serious reflection. And admitting your own gross culpability in the greatest crime in Australia’s political history.

English physician and botanical writer Robert John Thornton (1768–1837 ) published The Temple of Flora in the early 1800s, a lavishly illustrated, poetry-laced effort. Perhaps because Thornton was not a poet and his attempts at verse were poor, the book was not a popular success. The 800 copies printed nearly bankrupted him. But the illustrations from it — scrumptious color engravings of some of Earth’s most magnificent flowers, based on paintings by the eminent artist Philip Reinagle — endure as some of the most breathtaking botanical art of all time.

We owe the selection of these images to Maria Popova and her marvellous literary journal The Marginalian, of which we are unabashed fans. To read her piece on The Temple of Flora go here: