Australia Goes to the Polls: An Election fought on the Political Low Ground 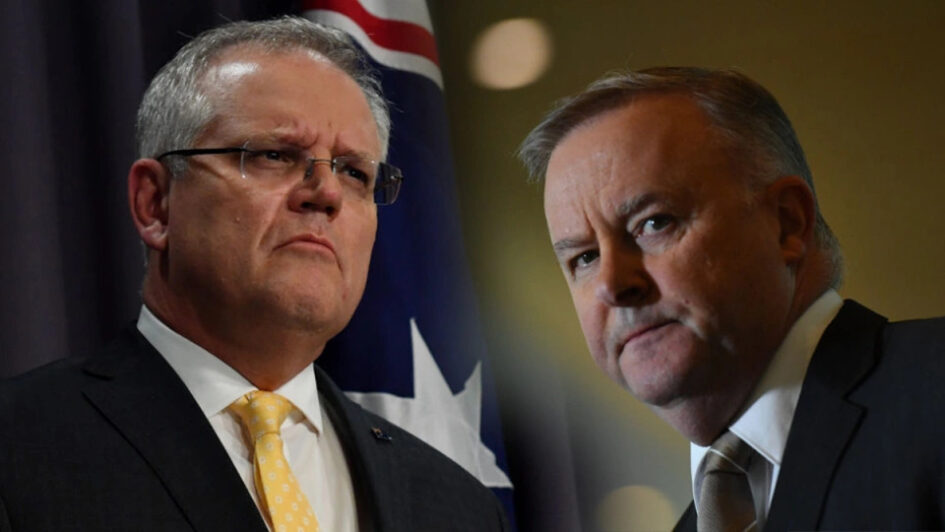 Australian voters will go to the polls on May 21.

The government enters the battle trailing the opposition 46-54% in the latest Newspoll, conducted after the budget, with Morrison and opposition leader Anthony Albanese virtually level as preferred prime minister. Labor is also ahead in the other major polls.

After flying from Sydney, Scott Morrison visited the governor-general on Sunday morning, paving the way for a six-week campaign. The Coalition is seeking its fourth term, while Morrison is leading the government into his second election as prime minister.

This election is a contest between a desperate prime minister and an opposition leader who sometimes looks as though he has been promoted beyond his capability.

Neither government nor Labor is putting forward an agenda to seize the imagination of Australians as they struggle out from the pall of the pandemic.

The Coalition, which enters the campaign well behind in the polls, is pitching centrally on economic management, as well as national security. Labor is casting itself as the “caring” party: “Child Care. Medicare. Aged Care. Because Labor cares”. It portrays the government as “out of ideas and out of time”.

This is an election that will be fought on the political low ground, not on the heights of competing ambitious blueprints for the country’s future. It’s a battle between a leader who’s lost the confidence of many of the public and one who has yet to gain it.

If Scott Morrison struggles over the line, we can expect a continuation of the “managerial” style of governing we’ve seen in the last three years.

If Anthony Albanese wins, Labor’s approach is promised to be (as he keeps repeating) “renewal not revolution” – worthy initiatives rather than innovative and bold thinking.

No one rules out the uncertainties of a hung parliament, which would put the spotlight on the crossbench.

Of course whoever is the victor may surprise us – for better or worse. And events, which have shaped politics so dramatically and unexpected during this parliamentary term, will continue to play a major, but unpredictable, part in the next.

Morrison enters the campaign with massive scarring. The ordinary (if little known) bloke from the suburbs, promoted as the so-called “daggy dad” of the 2019 campaign, is now viewed very differently.

Many voters have come to see him more clearly than they did three years ago, and don’t like what they see. He’s widely disliked and distrusted (although “trust” is multifaceted – a leader can be personally distrusted but still trusted on, say, the economy). Women in particular view the prime minister negatively. Colleagues will admit privately he’s a drag on their vote, especially in some traditional Liberal seats.

To state the obvious, Morrison can’t win this election by any sort of charm offensive. His problems are way beyond that.

It will be like the sighting of a rare bird if and when he appears in the seats where Liberals are fighting off high profile “teal” independents. Wooing those voters will have to be left to treasurer and deputy Liberal leader Josh Frydenberg.

Morrison can only win if he manages to demolish his opponent, instilling uncertainty and fear about an Albanese government.

Morrison hopes to emulate Keating’s (unexpected) win in 1993, when he triumphed with a shock-and-awe negative campaign.

But, unlike Keating, who in that campaign was punching at an enormous target in John Hewson’s radical Fightback program, Morrison’s target is akin to a rolled-up porcupine.

In 1996, the then-prime minister had worn out his welcome with the electorate and grappled with the small-target John Howard opposition. Keating lost. History may or may not repeat itself.

Morrison’s challenge is to inflate, in the minds of voters, an apparently unthreatening Labor alternative into something alarming. “Labor is an unknown in uncertain times,” the PM declares.

Albanese’s strength in a two-horse race is that he is not Morrison (or indeed Bill Shorten, with his excessive policy baggage, of the 2019 campaign).

His weakness is that, after decades in politics, he may not be disciplined enough, under the blowtorch, to avoid errors in the next several weeks. A certain prickly quality could come through under stress. And, although people don’t dislike him, he lacks the charisma of a Bob Hawke or the freshness of a Kevin Rudd. His persona doesn’t drive people away, but it’s no political magnet.

Albanese’s vulnerability was obvious the day after his budget reply, when pressed on Nine’s Today show about whether he’d increase taxes. On this simple and most expected question he faffed around, deflected, talked about the government. It took a couple of days before the issue was cleaned up (Labor would only increase taxes on multinationals).

If Albanese has trouble answering something so predictable, Morrison will often say anything that seems convenient in the moment, regardless of whether it’s true. On the ABC’s 7.30 last week, he asserted Gladys Berejiklian had denied a text message saying he was a horrible person. In fact, she’d pleaded lack of recollection.

When Morrison’s statements are misleading, they tend to come back to bite him. It’s part of his wider “character” problem. The denigration of him from people on his own side (Berejiklian, Barnaby Joyce) via leaked texts and in parliaments (Senator Concetta Fierravanti-Wells, NSW Liberal Catherine Cusack) has done him much more damage than his opponents could inflict.

The Morrison “character” failure delivers a windfall to the “teal” independents who are challenging Liberal seats usually considered safe. While the “teals” are elevating climate change and integrity, they also give Liberal voters who can’t stand Morrison personally a bolthole.

An extensive network of “teals” is appealing to the moderate centre of politics, with the contests in Mackellar, North Sydney, and Wentworth in NSW, and Goldstein and Kooyong in Victoria the core “teal” tests.

The “teals” have already had an impact. Morrison’s determination to have the government embrace net zero by 2050 was at least in part driven by having to sandbag Liberals in these seats. The payoff for the Nationals to agree to the target was billions of dollars for infrastructure for the regions.

These “teals” are well funded, especially thanks to the Climate 200, started by Simon Holmes a Court, and well organised. In Kooyong for example, there are hundreds of volunteers helping independent Monique Ryan, who is running against Treasurer Josh Frydenberg.

The high profile independents are diverting Liberal resources and attention. But their difficulty in actually winning should not be underestimated: they have to force themselves into second place on primaries before they can get a leg up on preferences.

There is already a batch of crossbenchers in the House of Representatives. Most will be returned and they’d be critical if the parliament were hung.

The 46th parliament hasn’t had much to commend it. Its legislative achievement was meagre. COVID was a massive limitation, but it wasn’t the sole problem. There was a lack of ambition, which the pandemic masked. For example, the government’s failure to bring in an integrity commission was basically a failure of will, a reluctance by the government to meet the public’s expectations.

For the reputations of individuals, and the institution of parliament generally, this has been a devastating term.

The parliament was rocked by the allegation of former staffer Brittany Higgins that a colleague raped her in a ministerial office. A subsequent inquiry into the parliamentary workplace painted a shameful picture of bad conduct.

Linda Reynolds, the minister who initially dealt with Higgins, was shifted sideways. Indirectly, consequences flowed to the late Labor Senator Kimberley Kitching, ostracised by her own side for allegedly leaking to Reynolds about the matter.

In the wake of a historical rape allegation (which he denied), Christian Porter quits politics at this election. A messy affair with a staffer (in the previous term) saw Alan Tudge effectively shunted from the frontbench (although he formally retained title of education minister).

On a number of fronts, the 46th is a parliament that won’t be missed. Everyone would hope – but not necessarily expect – the 47th, with the worst of COVID behind us, will be one of greater achievement.

As the formal campaign starts Albanese, on the basis of the polls, is in a winning position. But, especially given the experience of 2019, pundits are being careful with predictions. In elections there is not just the national campaign grabbing the headlines but the grassroots contests. If things are close, they can be the difference between victory and defeat.

The current polls guide us as to how people are thinking at this instant; they can’t tell us if or how the formal campaign might reshape that thinking.