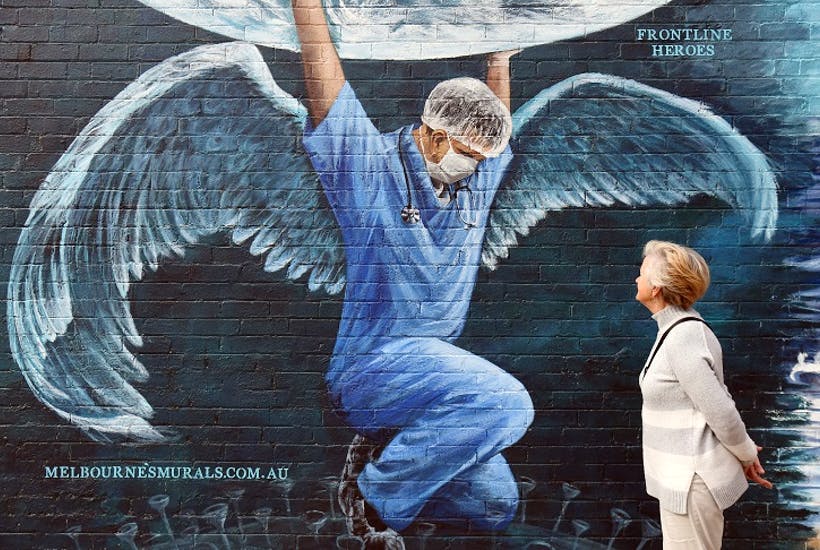 When a Nuremberg style trial or a Royal Commission is finally instituted to bring the perpetrators to account and find out what happened to the freedom loving Australia of old, how it was so easily destroyed, how and why an authoritarian derangement took over civilian life, the role of the nation’s media will be closely examined.

The craven abandonment of all old fashioned journalistic principles in favour of propagating government propaganda has been one of the saddest aspects of the debacle overtaking the country.

When it comes to mainstream media, the only real exception has been The Spectator Australia, whose reputation has soared over the past two years. By strongly and intelligently questioning the government’s Covid narrative it has attracted some of the nation’s brightest academics and journalists.

Here is a sampling of some recent articles.

The censoring of debate and the quality of information is woeful.

The public’s seeming blind acceptance of the appalling state of discourse is enough to make one believe the ‘conspiracy theory’ of ‘mass formation psychosis’.

ut rather than our pathway out of the pandemic, at 95 per cent vaccination we are still forced to check in with QR codes, wear masks indoors, show a vaccine passport to have a coffee in Queensland and may never be able to travel to Western Australia again.

The once-great profession of journalism seems to lack curious souls.

Numbers may not lie, but graphs can give the lie to the lockdown and vaccination narratives that have held the world in their iron grip for two years.

We have been locked down, put under mass house arrest, tracked, traced, and jabbed serially for a pandemic so dangerous we need daily reminders of impending gloom and doom. Even those who ‘do the right thing’ find the goalposts of compliance moving with the regularity of a carrot dangling before an ass.

Omicron has spread everywhere, smashing through multiple layers of protection. It also demolishes the case for vaccine passports and reinforces doubts about mask mandates that symbolise compliance with biofascist state diktats that lack reliable scientific backing. Hospitals have come under pressure not from the virus, but the crazy patchwork of rules to kill it that created unsustainable staff shortages because of overzealous contact-cum-isolation rules.

‘Rules are rules’, intoned Scott Morrison as his thoughtful response to the growing international embarrassment over Novak Djokovic.

More than a rebuke of Djokovic, Morrison’s comment is an endorsement of the transformation of a vibrant democracy in which people have rights and governments have obligations, into a system of rule by, of and for the laptop class. Just as truth that may not be questioned is dogma, not science, so rules beyond challenge are anti-democratic. They are not divine commandments but the products of bureaucrats and politicians. They’ve been autocratic, arbitrary, inconsistent, often anti-scientific and sometimes downright bizarre: punishing people for trying to exercise outdoors while socially distanced, despite obesity being a major Covid risk; watching a sunset; not wearing a mask while fishing and golfing alone. They’ve been enforced with conscience-shocking brutality.

Mistakes happen, but information fitted around a narrative of fear does not give an accurate picture of what is really happening. Instead, it fosters anxiety and diminishes hope.

Hazzard is not the only high profile government department, organisation, or prominent person to stoke fear in recent months.

The Sydney Morning Herald carried the headline, Australia prepares for 50,000 to 150,000 coronavirus deaths on March 16, 2021 based on commentary from Deputy Chief Medical Officer Paul Kelly. These initial estimates provided by medical experts remain several orders of magnitude larger than what has transpired in Australia.

Many are familiar with the term ‘fifteen days to slow the spread’. People were largely on board in 2020, given the unknown nature of Covid. Fifteen days have become more than 500, while government and public ‘servants’ increasingly intrude in personal decision making – with debatable results.

Perhaps we should have added George Orwell’s famous words to the agreement, ‘We know that no one ever seizes power with the intention of relinquishing it.’

Governments (state and federal) have failed to honour compacts with the public, as well as agreements with each other, and appear to shift goalposts without cost-benefit analysis or publishing their medical, societal, and economic reasoning.

Victoria has activated state-wide Code Brown emergency measures for the first time in its history on January 18. This means that all Melbourne public hospitals and major regional facilities will prioritise Covid patients while ceasing or reducing non-urgent clinical services.

The reason? An average of more than 4,000 medical workers are unavailable across the state each day due to Covid isolation requirements. Furthermore, administrators expect hospitalisation for Covid to increase to beyond 2,500 in the next month.

However, the cause for pessimism is puzzling. What is more alarming than the logic behind the decision is the continued fixation on Covid at the expense of everything else. While Covid has been linked to the deaths of over 1,700 people in Victoria, the number needs to be examined in context. For instance, the median age for those who died from Covid in Australia is 86.9 years. This is older than the average life expectancy of Australians, which sits at around 83. Furthermore, the statistic being the median means that half of those who died from Covid were even older than 86.9 years.

The West’s Covid-19 strategy of lockdowns, mass vaccinations and extreme curbs is losing credibility by the moment, even if various wannabe-despots are slow to realise it.

Despite vaccination levels running at 70 per cent and above in many Western nations, Covid cases are at record levels across the UK, Europe, Australia, the US, Israel and more, nearly two years after the virus first escaped China. The variants are outrunning the scientists’ vaccines, vaccine efficacy is waning, and multiple health authorities such as the WHO and the European Medicines Agency (EMA) have come out warning against repeated boosters, not only because they were designed for previous variants, but because they may have adverse health effects. ‘We should be careful in not overloading the immune system with repeated immunizations,’ warned Marco Cavaleri, the EMA head of vaccines strategy. Former UK vaccine agency boss Dr Clive Dix says vaccinations have now become a ‘waste of time’. And finally, early treatments are in focus – new drugs, antivirals and more.

Australia, except for wayward sandgropers, has abandoned its policy of zero-Covid and is letting the dominant, milder Omicron variant run. The result is rocketing case numbers, pressure on hospital systems, and a two-note chant from our politicians of vax, vax, boost, vax, vax boost. Yet the ‘vaccines’ have not prevented infection or transmission among the jabbed, and are of little efficacy against Omicron, as even Pfizer boss Albert Bourla said recently.

‘Australian Lamb. More tender than border control’ quips an ad in the annual campaign run by Meat and Livestock Australia in the leadup to Australia Day. Another says, ‘Everyone’s welcome at our BBQ. Not Djoking.’ A third shows desperate Aussies using a national lamb rollout to barbeques across the nation to send smoke signals into outer space which alert Elon Musk that the country is still here and prompt floods of tourists to return.

In a wonderful display of Australia’s Catch 2022 Covid rules, tennis coach Darren Cahill said that an exemption for a recent Covid infection should exist only for people who want to be vaccinated, but in the end, it didn’t matter. Even though Djokovic had a valid medical exemption to compete in the Australian Open and had been granted a valid visa to enter the country, he was deported not because he was infected with a dangerous virus, but with a dangerous idea.

What idea? That he, Djokovic should be allowed ‘to choose what’s best’ for his body. Not in Australia.

Echoing former prime minister John Howard, who said, when facing thousands of asylum seekers arriving on Australia’s shores, ‘We will decide who comes to this country and the circumstances in which they come’, Prime Minister Morrison showed the world that he would decide what is injected into our bodies, and the circumstances in which it is injected. Sure, the federal government’s health website proclaims that ‘vaccination for COVID-19 is voluntary’ and people have the option to choose. But as thousands of doctors, teachers, paramedics and now Novak Djokovic have found out, choosing not to be vaccinated means choosing to lose your job.