After two years, the COVID ‘Conspiracy Theorists’ have been proven Correct 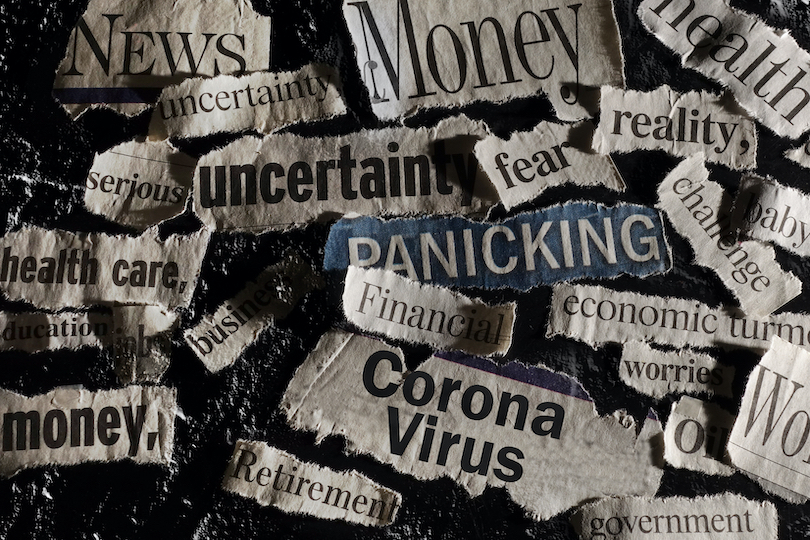 Two years ago — on 11 March 2020 — the coronavirus was officially declared a pandemic by the World Health Organization, and with in a matter of weeks, the entire world would be changed forever.

From the very start, we identified the players and agenda behind this dystopian shift, touching on the psychological compliance, potential of vaccine passports, the eugenics ideology and future directions.

Over the past two years, in a new era of Orwellian censorship, those who have dared to question this plan have been regularly labelled ‘conspiracy theorists’ by the media and those who believe their words.

However, after two years, many of the predictions made by so-called ‘conspiracy theorists’ have indeed come true, as we enter a new era of transition during The Great Reset operation.

We have been documenting the changing narrative. We haven’t forgot the journey.

Let’s take a look back now at the ‘conspiracy theories’ that came true.

When news began circulating of a ‘miracle vaccine’ in development that would ‘come to the rescue’ of the crisis we found ourselves in, many became suspicious of the motives behind a mass rollout.

The already-established pro-choice movement in Australia began to question whether mandates would accompany this vaccine rollout. We discussed whether coercion or force would be the route taken in April 2020.

Take a look at one headline that has certainly aged well, don’t you think?

Fast forward just one year later to 2021, and Australians would be told they can no longer keep their employment or functionality in society if they have not had their mandatory vaccinations.

Next up, while Australia awaited the development of this vaccine throughout 2020, millions sat in a cycle of perpetual lockdowns — from national to state, and sometimes both.

The public was continuously told that lockdowns were necessary, from ‘Two Weeks to Flatten the Curve’, to ‘we need to do this until the vaccine arrives’, to.. ‘don’t you care about grandma?!’

The good news? It worked!

In December of 2020, three months before the vaccine rollout would officially begin in Australia and during the 2020 US Presidential Election period, our country defeated COVID!

Can you believe it?!

Well, most of the public did.

Although, the crazy ‘conspiracy theorists’ warned of a second wave to come directly after the holiday period, which would continue the shift towards a techno-fascist control grid.https://tottnews.com/2020/05/09/food-for-thought-may-20/embed/#?secret=iMIqyIHb9c#?secret=T2QhfDLi0xhttps://tottnews.com/2020/10/07/pacific-test-ground-techno-fascism/embed/#?secret=bV45EaKVW4#?secret=DfV972wRYK

Of course, just as predicted, it was only a matter of time before the next strain would emerge to throw off Australia’s path to freedom in 2021, sending the country into more lockdowns and restrictions.

Who would of guessed?

MOVING OF THE GOAL POSTS

Moving on, and not only did most of the public deny that coercive vaccination policies would be enacted or that lockdowns wouldn’t work — but they didn’t seem to notice when both of these things came true.

Now, in 2021 Australia, the public was subject to harsh lockdowns (that didn’t work the first time) and told they would only be eased if people rolled up their sleeves and got those vaccination rates up.https://tottnews.com/2021/07/31/morrison-announces-medical-apartheid/embed/#?secret=REBaM8IpDA#?secret=iCBOKp34C4

A psychologically warped public, who denied this would be the case the previous year, saw no problems with this push and dismissed ‘conspiracy theorists’ who now said the goal posts would change.

‘Just do your part for the community and it will all be over’.

But let’s take a look at the turn of events. New South Wales, in August 2021, said a 50% vaccination rate would “be the key” to easing restrictions across the state.https://tottnews.com/2021/08/02/berejiklian-vaccination-rates-lockdown/embed/#?secret=0qVIrD8m66#?secret=FnSp8aUx7X

Oh, how things would change from here.

Just one month later, discussion soon shifted to this becoming 70%:

This tactic wasn’t just used for vaccines. From border re-opening, to constant ‘changing of the science’, Australians were subject to a continued rollercoaster of intentional mixed messages to round out the year.

CRAZY websites such as TOTT News warned that this is part of an indefinite cycle in June 2020, BEFORE the 50% target was even established:https://tottnews.com/2021/06/13/the-war-is-not-meant-to-be-won/embed/#?secret=aNPK4m1A62#?secret=1om0LNAnlZ

But this is just all ‘conspiracy theory’ of, course.

The targets were just raised to ensure better protection, silly.

Once we finally reach it, the vaccines will totally work and ensure the pandemic will be over forever!

‘EFFECTIVE AND WILL STOP THE SPREAD’

2021 was the year of the vaccine rollout.

‘Get those jabs in your arms and it will all be over!’

All of the harsh lockdowns — resulting in economic despair, increases in mental health issues, a social crisis for children and more — were ALL WORTH IT because the vaccine could now finally set us free!

‘Vaccines WILL end the pandemic!’

Just two jabs and everything will all be over, right?

Thank goodness we can finally END this thing!

And.. the end result of mass vaccination?

Well, it turns out the ‘doomsayers’ were in fact correct again.

Two jabs DID NOT stop the spread or end the pandemic period.

The ‘conspiracy theorists’ used thoughtcrime sources — such as the World Health Organization in late 2020 — to warn the public that the jabs won’t stop the spread in 2021 and any further lockdowns are unjustified.https://tottnews.com/2020/12/29/coronavirus-vaccine-update-who/embed/#?secret=cuSEXUH1n7#?secret=QnPOjjeZgo

But who listens to them anyway!

What have they been right about for the last two years?!

I mean, it was only the double-jabbed that were the driving force for the latest wave of ‘Omicron’ to emerge.

Another tick for the ‘conspiracy theorists’!

FROM FICTION TO REALITY

Not only were vaccines made mandatory, the goal posts changed, lockdowns revealed as ineffective, and the science being proven false over time, the public openly cheered and cried for vaccine passports!

‘We need to ensure that only the (now) FULLY PROTECTED can enter society’, they cried.

In fact, at the beginning of the pandemic period, when one even warned of the notion that ‘vaccine passports’ would be introduced — you were laughed at for such a ‘outlandish notion’.

TOTT News posted a piece in May 2020 bringing attention to this potential Orwellian direction:https://tottnews.com/2020/05/14/immunity-passports-vaccine-tracking/embed/#?secret=DEnwPBUTnA#?secret=yitlvoqHHM

‘Don’t worry about it! ‘They wouldn’t do that!’

Now, even at the time of publishing this piece, states such as Queensland still require vaccine passports be shown to enter many popular vaccinated-only establishments, such as pubs, restaurants, club and more.

Will the ‘conspiracy theorists’ be given an apology?

Or will the public simply just move on believing this was always the case?

‘We have always been at war with Eurasia, Winston’.

Why were so-called ‘conspiracy theorists’ so vocal towards the beginning of this pandemic?

Why did they reject the COVID hysteria?

Remembering back, and it was very early on that virus sceptics began noticing irregularities with both the methodology and reporting of deaths associated with this ‘disease’.

Pointing out that COVID death statistics may be exaggerated was once a “DANGEROUS” conspiracy theory:

These thought-criminals went to such abhorrent extents as pointing out that the overwhelming majority who catch the virus survive, and that classifications were shrouded in benefits schemes and statistic manipulation.

This website was one of these entities pushing this ‘theory’.

Although, it wasn’t a theory. It was a fact.

We also exposed the sham of death classifications, particularly in New South Wales:https://www.youtube.com/embed/keuH1t9TKDQ?version=3&rel=1&showsearch=0&showinfo=1&iv_load_policy=1&fs=1&hl=en-US&autohide=2&start=6&wmode=transparent

‘How could this be the case?! Those looneys at it again!’

COVID is an EXTREMELY DEADLY disease that requires absolutely everyone, including perfectly healthy people with no pre-existing conditions (majority), suffer for ‘the good of the community’.

Until it wasn’t, and the truth for most healthy Australians finally came out:

Of course, this wasn’t new news to the ‘conspiracy theorists’.

Yet another ‘wild theory’ to come true when reflecting back over the last two years.

It has been a pretty good track record to this point for the ‘crazies’, if you ask me.

Many of the predictions made over the last two years have come true.

And now, they are still warning you of what is to come in the future.

Is is time the public starts paying attention?

In 2022, Australia has entered a period of supposed freedom again, but the pharmalogical agenda is far from over. The path towards an Epsilon class continues and perpetual booster shots are warned moving forward:https://tottnews.com/2022/01/10/booster-shots-mandatory-nsw-vic/embed/#?secret=QARJ2coO3y#?secret=zhSXtHsINKhttps://tottnews.com/2022/02/13/atagi-definition-update-analysis/embed/#?secret=Ql6kXTxGPu#?secret=q2OMlltfnV

What are the odds, that directly on the two year anniversary (this morning), The West Australian lets citizens know of their future fate that awaits them for the next decade:

From ‘two weeks to flatten the curve’ to ‘ten years of boosters’.

Yet we have been called the ‘conspiracy theorists’ over the last two years?

If the plan is to administer vaccines for over a decade, well then the authorities will need a ‘justification’ for this all to be possible. A good thing that $2.1 billion will be given to health departments this year.

What for? In anticipation for further COVID-19 spikes to occur in the winter months of 2022.

Just after the 2022 Federal Election theatre. How convenient.

Indefinite warfare. ‘The war is not meant to be won’.

Finally, as part of the bigger picture, the Great Reset will heavily incorporate the emergence of new technologies and the Fourth Industrial Revolution to user in a new era of biofascism.

Yet again we see many concepts that were once ‘bizarre theories’ begin to be normalised.

Microchips, for example, are already being promoted as a ‘quick and easy’ form of vaccine passport.https://tottnews.com/2022/01/11/vaccine-status-stored-on-a-microchip/embed/#?secret=xOUOmhdfgk#?secret=IgUTU0u9gF

If you are one of the ‘conspiracy theorists’ who stood tall by your beliefs over the last two years, bravo.

You stuck with your morals and time has proven you correct.

Take a moment to reflect on everything that has come true, despite the direct mocking of the mainstream media, herd masses, or authorities behind the shifts in motion.

You are in a small club of people that will weather the storm moving forward.

Knowledge is power and the ‘conspiracy theorists’ have become the new-age trend forecasters.

When millions look back on history, you will be remembered as being on the right side.