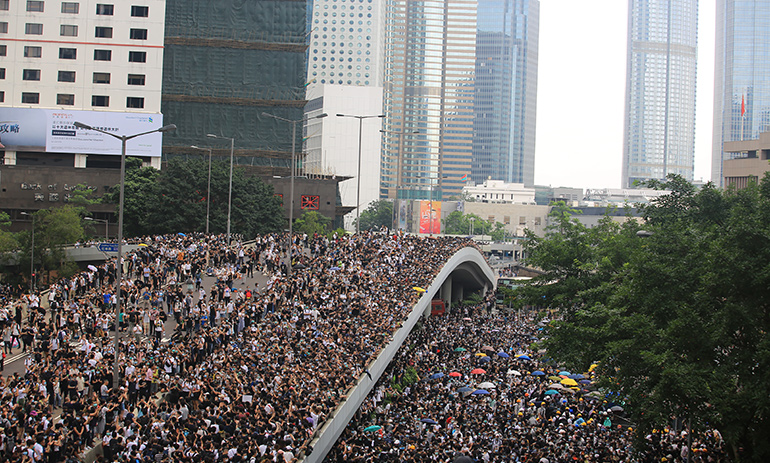 The NSW parliament has passed tough new anti-protest laws with less than a week’s notice, prompting 39 civil society groups to spring into action to call for an end to the “draconian” measures.

The NSW government flagged it was seeking to introduce legislation that would mean members of the public could be fined up to $22,000 and/or jailed for a maximum of two years for protesting illegally on public roads, rail lines, tunnels, bridges and industrial estates.

The laws were passed with support from the NSW Labor party.

The new offence applies to ports in Newcastle, Port Kembla and Port Botany, but the government says it intends to add more facilities.

Minister for metropolitan roads, Natalie Ward, said the changes will ensure there are severe penalties for future protestors looking to block key transport routes across NSW.

“Protestors who stop commuters getting to and from work and block our transport links put themselves and drivers at risk and have no place on our roads,” Ward said.

“Under these changes, protestors who block any major routes in our state will now face much harsher penalties, aligned to the disruption they create across our networks.”

Just under 40 civil society groups, including the Australian Council for Social Services, the Human Rights Law Centre, and the NSW/ACT Aboriginal Legal Service, have formed a coalition, warning the new bill will undermine the ability of everyone in the state to exercise their freedom to protest.

Publishing an open letter on Thursday, the coalition said that everyone from school kids marching for climate change to union groups taking action at industrial sites could come under the umbrella of the “draconian laws”.

“Such laws are incompatible with the democratic right to protest and our fundamental civil liberties,” the letter said.

Mark Davies, the chairperson of the Aboriginal Legal Service said that public protest was a critical way for marginalised groups to be seen and heard.

“The right to assemble and demonstrate in our streets, towns and cities is a fundamental cornerstone of democracy,” Davies said.

“For marginalised communities, public protests enable us to be seen and heard, even – and especially – when those in power would rather suppress our voices.”

Human Rights Law Centre senior lawyer, Kieran Pender, told Pro Bono News that with the bill rushed through Parliament in a matter of days, there had been no time to properly look at the implications of the new laws.

“There had been no sort of inquiry or committee that looked at any issues there might be,” Pender said.

“If they had, they could have seen there are already laws which provide that balance. For example, if protests turn violent, there are laws that enable police to take action.”

He said the broad nature of the laws made it difficult to know what will and won’t be criminalised under them.

“As an example, some young children might be protesting for climate action, and they spill into the concourse of a railway station…they might not cause any major disruption other than requiring some commuters to walk around them, but under these laws it’s possible that they could go to jail for two years and face a $22,000 fine,” he said.

He also noted that these latest changes were not in isolation, and were part of an “alarming” national trend restricting peaceful protest rights in Australia.

In 2014, Tasmania introduced a law that made it illegal for protesters to “prevent, hinder or obstruct” businesses, even in public areas such as state forests or the access points to areas where commercial activities are conducted, if they ought to have known the impact their political activity would have on the business.

In 2017 however, these laws were overturned after the former Australian Greens leader Bob Brown won a landmark high court fight, arguing that the laws directly targeted implied freedom of political expression in the constitution and were therefore unconstitutional.

Penders said that the concerns raised in relation to the Tasmanian law about its breadth and vagueness were all present in the new bill in New South Wales.

“It wouldn’t be surprising to me if there was some constitutional litigation in relation to this bill,” he said.

Maggie Coggan is a journalist at Pro Bono News covering the social sector.