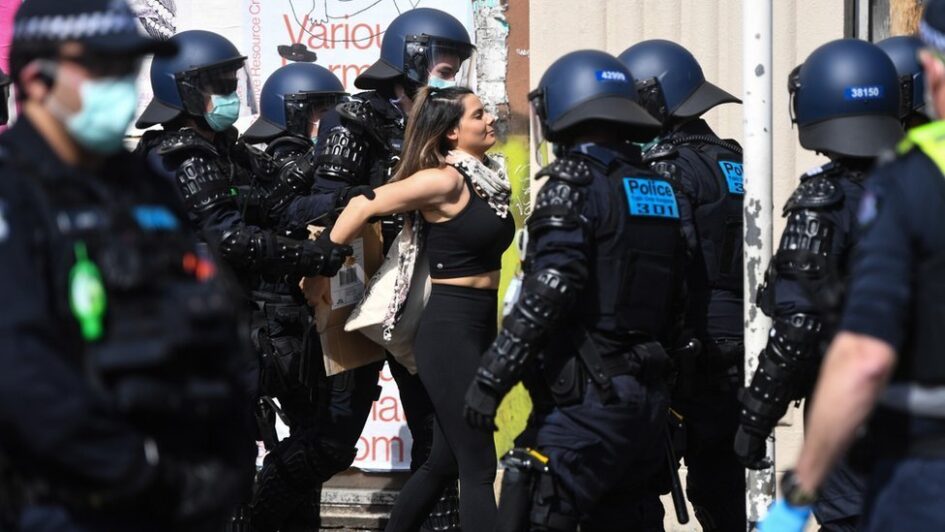 Draconian enforcement powers have become commonplace in Victoria since the beginning of the coronavirus ‘pandemic’, and are set to continue with the passing of the Omnibus Bill.

Now, after blocking a business from opening their doors this week, Victoria Police are showing their true alignment to a corporate-fascist, UN-driven agenda.

Victoria’s police state saga continues to get worse with each passing day. The true colours of the enforcement squad force are coming to the surface, giving a glimpse to a future UN-driven regime.

Many of you may have saw the latest: A couple running a salon and barber in Melbourne’s south-east were slapped with $10,000 fine this week after opening.

Police were waiting outside Jomana Najem and Rojih Alhallak’s business at 8.30am on Saturday morning after Ms Najem spoke about her intention to open her business.

Ms Najem said at least six customers received a haircut before police threatened her with arrest and issued her a fine for $9913, with the salon ‘closing’ by 11am.

An interesting element left out from the news stories was shocking footage showing police blocking the business premise and harassing supporters.

They also arrested a man for simply waving an Australia/UK/US flag as he walked down the street:

At least one person who went to the salon on Saturday morning was holding a ‘Save Victoria’ banner.

It has often been said that the police force is the biggest gang in the world. Mafia thug men. Racketeers of the highest order. Some could argue the purpose of fines is of a similar psychological extortion.

What did police have to say for themselves for this anti-democratic behaviour?

“Victoria Police understands the difficulties facing many businesses at the moment and made every effort to see today’s matter resolved without the need for a fine to be issued,” a Victoria police spokeswoman said.

“However, after repeated warnings and consultation with the Department of Health and Human Services the business owner was issued a fine for $9,913.”

The news comes after a defiant Berwick retailer earlier this week vowed to trade indefinitely, despite facing a fine of almost $10,000 after throwing open his menswear store on Wednesday.

Harry Hutchinson said he was fed up with the state government’s compulsory lockdown of retail outlets in Melbourne and made his own decision to reopen his business, Harry’s Clothing.

Premier Daniel Andrews said on Saturday he hoped no more businesses would follow in the wake of the Berwick, Hughesdale and Jim’s Mowing examples, and urged business owners to “be patient”.

Be patient? For what? Another six months of lockdowns that are destroying livelihoods in a multitude of areas? Please. Good on these business owners for standing up for themselves.

Remember: Andrews is just a figurehead throwing orders around. The real key element to take away from this story is the continued behaviour of the police force carrying out these demands.

Each police officer needs to take a hard look at themselves in the mirror. Is this what you signed up for? To deny people their basic fundamental rights as a human?

This is just the latest example in a shift by police that is reaching dystopian proportions.

It it is no laughing matter that in the space of just a few weeks, Victoria became a police state. Its ‘government’ made laws and then enforced those laws, in ways no different from tyrants.

In the first four months of lockdowns alone, from March 2020, a total of 193,740 ‘spot checks’ were conducted by police across Victoria to ensure people were ‘following orders’.

This is despite websites like ours saying this was a SCAM from the very beginning (Feb. 4th).

It became very clear soon after, that this was a massive psyop being conducted (March 16th).

‘PSOs’ were then soon elected and empowered to make arrests, conduct searches, issue infringement notices and request personal details from members of the public.

These ‘authorities’ in Victoria canenter any home without a warrant or permission, and take any action they deem ‘necessary’ to ‘slow the spread’.

Criminalisation of leaving your dwelling, gathering with others and shopping for things the state decides ‘you don’t need’, is a recipe for repression that continues to boil over.

Now, everyday is a living nightmare.

Just take a look at the harassment Marty and Steve have documented along the way:

Who would have ever thought such a basic thing like going for a walk without a mask, or going more than 5km from your forced home detention, would gather this response from both police and media.

Victorian police have betrayed the public, and this nonsense it set to continue into next year.

Looking back on news stories in years prior to the COVID-19 era, many pieces fall perfectly together. Gene-editing deregulations passed this time last year make much more sense now, for example.

In March 2018, the government announced a 3,135 increase in police numbers. This was “the biggest increase ever”, as Andrews boasted on Twitter, at a cost of $2 billion to Victorian taxpayers.

What on earth would they need this for? Well, now we know.

Fast forward to today and the Victorian government’s coronavirus omnibus bill has passed parliament, extending the state of emergency until April and giving police new powers to ‘contain the spread of coronavirus’. What a sad state of affairs.

The bill was passed after the government abandoned controversial sections that would have given authorised officers the power to detain a person if it was suspected they were going to breach emergency directions. It originally faced fierce backlash from crossbenchers.

This was merely be a distraction to get the rest of the bill passed.

Victoria is set to endure further draconian measures, before the second wave spreads.

Now, they are preparing to pass a bill that would enable foreign troops to set foot on Australian soil to respond to ‘emergencies’ or ‘disasters’. This includes immunity from civil or criminal liability.

The path is very clear.

Check out more of Steve and Marty’s work by clicking here.