Art for Trying Times: Titian’s The Death of Actaeon and the Capriciousness of Fate 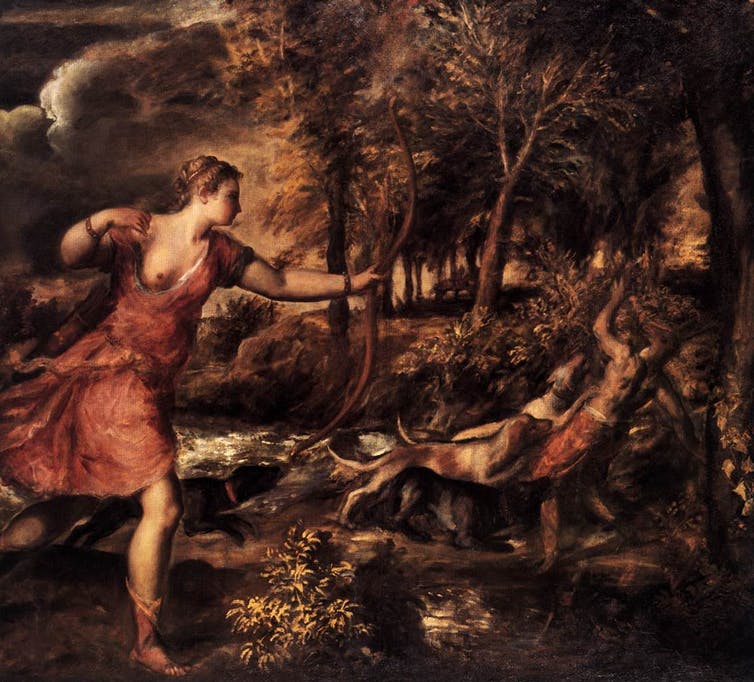 By Alastair Blanshard, The University of Queensland

Why do bad things happen to good people? It is a question that seems particularly pertinent during times of pandemic. Disease is no respecter of virtue. It is just as likely to strike down saint as sinner. Yet even in more normal times, this is a problem we confront with depressing regularity. All too easily one thinks of lives cut too short, of acts of kindness and generosity that go unrewarded. The world can be a cold and bleak place. Why does this happen?

Every culture develops its own answer to this question. For the Greeks and Romans, their solution was that tragedy occurred because the gods were at best indifferent to mankind, at worst downright cruel.

When I’m feeling my most pessimistic, I often think of this world view and, in particular, one story that the Greeks told. It is a story perfectly captured in one of treasures of the National Gallery in London, Titian’s The Death of Actaeon.

The story of Actaeon was one of the most popular of Greco-Roman myths. Its most famous retelling was undertaken by the Roman poet Ovid in his epic Metamorphoses. Titian had little Latin, so he almost certainly read about the myth in one of the many translations and abridged versions of Ovid that circulated in the 16th century.

It is a myth that shows well the sadism of the gods. Actaeon committed no crime. It was only an unfortunate coincidence that, one day while hunting, he happened to stumble across the goddess Diana (Greek: Artemis) as she and her retinue of nymphs were bathing in a forest pool.

Diana, who prized her virginity above all else, did not take kindly to being caught naked by this stranger and so she organised a terrible punishment. With a wave of her hand, she transformed Actaeon into a stag. The hunter now became the prey. To magnify the cruelty, Actaeon was still fully conscious, a man trapped in the body of a beast. Tears trickled down his now furry cheeks.

Instantly, Actaeon realised his danger. He had arrived with his pack of hunting dogs and they wasted no time turning upon their former master. The hounds seized his legs and dragged him to the ground. Their jaws bit deep into the shoulder, back, and throat. Actaeon died in agony torn apart by animals he had raised with such devotion.

Titian’s version of this tale shows the final moments of Actaeon’s life. It is an extraordinary painting from the end of Titian’s career. Most paintings of this story prefer to focus on the moment when Actaeon encounters the bathing Diana. Unable to resist the voyeuristic potential of the scene, they indulge in a riot of naked female flesh.

There is an earlier Titian of precisely this moment which he painted for Philip II of Spain. Yet in The Death of Actaeon the voyeurism is limited to one exposed nipple, a visual allusion to Actaeon’s crime. Diana dominates the foreground, but the line of her arm draws the viewer’s eye to the figures on the right of the painting. Here we see Actaeon caught in mid-transformation. He still retains his human form, but his head is now that of a stag.

This is enough for the hounds, who have overwhelmed Actaeon. Man, deer, and dogs merge into one muddy, muddled heap, a confusion of forms so jumbled that many have wondered if the painting is actually finished – but in its commotion it perfectly captures the vicious vitality of the act. Against this chaos, Diana stands off to the side ready to administer the coup de grâce, the only form of kindness she is prepared to give.

How could the Greeks and Romans bear to live in a world in which such unfair savagery received divine approval?

The death of Actaeon is emblematic of so much injustice. The ancient Greeks and Romans may not have really had to worry about the correct etiquette for dealing with naked divinities, but they did need to worry about equally unpredictable forces. Theirs was a world stalked by famine, disease, war, and natural disaster.

Yet, it was in facing up to the capriciousness of fate that the ancients found meaning in the world. When Ovid introduces the story of Actaeon, he reminds his readers that no man should be regarded happy until he is dead. The treasures that we possess today can all too quickly and easily be taken away tomorrow. In this we see the true value of Actaeon’s story.

The lesson is not that the world is cruel, but rather that the gifts that we possess need to be cherished for the hard-won, against-the-odds, bounties that they are. It is the absences and deprivations that give value to our lives.

Only the person who has been hungry can truly know what it is to be full. The child born into wealth will never appreciate the riches that they enjoy.

Disasters are inevitable. They should not make us give up on life, but rather we should celebrate the preciousness of that life all the more. To do otherwise is to let the gods and Fate win, to let them turn us into beasts.

A Sense of Place Magazine, Alastair Blanshard, The Death of Actaeon, Titian, Tribulation