Sydney’s Song Before Sunrise: The Photography of Tim Ritchie 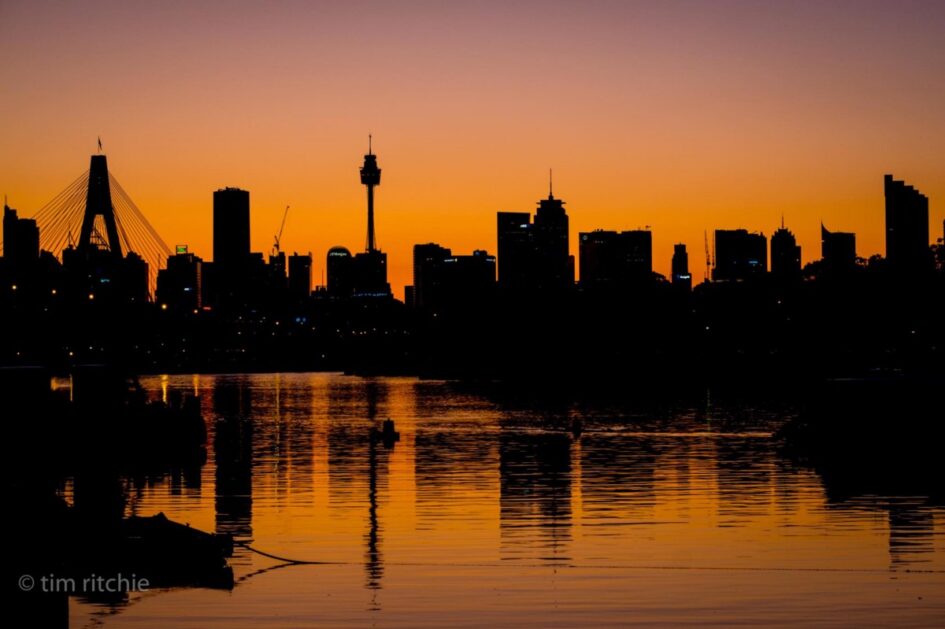 Crisis turns into salvation at every step.

For Tim Ritchie it is literally true.

“I am a diabetic and eight years ago my doctor told me to walk 10,000 steps a day, but even then my blood sugar levels were still crappy,” he recalls.

“So I decided to take up bike riding.

“I was a senior executive at the Australian Broadcasting Corporation and by the time I got home I was exhausted. I thought, the best time to cycle is in the early hours of the morning.

“So I started setting off at four.

“I live in the inner-city, so it doesn’t take that long to get to the harbour at that hour of the morning.

“When I was a much younger man, I would finish working in radio about 10pm and then go out and DJ in a club.

“I finished about 3am. When everybody had gone home I would have the city to myself. And I would wander it on my own.”

Sydney to me is at its most beautiful when it is empty.

I didn’t realise how much I missed it until I started riding my bike, and started once again experiencing the empty Sydney I had known.”

The Razzle Dazzle of Darling Harbour

This shot is of Darling Harbour, specifically Cockle Bay.

It is called Cockle Bay because before colonisation the indigenous people would open cockles there.

At dawn the open shells would look very spangly laid across the foreshore.

This picture is almost an ode to those indigenous people, who spent so much time in the preparation of their food. It is still, in modern parlance, a food court, with lots of restaurants. And still spangles, in a 21st Century Western way.

What kept me riding was the photography, because riding itself gets a bit boring, particularly in winter.

So I started taking photos with my phone, and it didn’t take long to be unhappy with the result. Phones back then weren’t very good in low light.

I want to capture both the grime and the bling of the city.

That’s a very Sydney thing. The high and the low.

At that time I also had to go back and see my specialist.

Something has changed, he said.

You are no longer going to have a heart attack or stroke. Your diabetes is much better controlled.

What are you doing differently?

It is the hills of Sydney.

Tourists might not realise, but Sydney is certainly not flat. If you walk it, it is too hard, and if you are doing it on a bike, it is even harder.

I am a very driven person. I don’t like to fail, so I push myself.

As a result all the nooks and crannies of the harbourside have been made available to me — if I put in the work.

A Working Harbour in the Quiet of Morning

As beautiful as Sydney Harbour can be, there is surprisingly little literature extolling its many fascinations.

Poet, journalist and war correspondent Kenneth Slessor, whose work has gathered in stature since his death in 1971, wrote one of the most famous poems about the harbour, Five Bells.

It was first published in 1939 and is an elegy written after the death of Slessor’s close friend, Joe Lynch, remembered as a high humoured cartoonist of bohemian bent.

Lynch drowned after jumping from a Sydney ferry, believing he could beat it to the wharf. His body was never found.

But I hear nothing, nothing…only bells,
Five bells, the bumpkin calculus of Time.
Your echoes die, your voice is dowsed by Life,
There’s not a mouth can fly the pygmy strait —
Nothing except the memory of some bones
Long shoved away, and sucked away, in mud…

This picture is an ode to the folly of capitalism, trying to make everything shinier and newer, leaving the Sydney I knew in my hay day well behind.

I was cycling across Pyrmont Bridge and this scene caught my eye.

I was drawn to the colour play between the reds and the golds and the aqua blue of the craft at the bottom.

The red cranes in the background are yet another monument to out of control development which, as Sydney has seen massive population growth, is very obvious to someone like me who has lived here much of their life.

A lot of what I take is completely unplanned. There is no one around. I pay attention to the road, but I am looking around all the time, trying to observe the changes that are happening and looking for new angles.

The tens of thousands of photos I have taken is either the whimsical folly of an old man, or someone who is seriously documenting the transformation of Sydney over time.

The word photography comes from two Greek words, photo for light and graphy for drawing.

I try to draw with light.

My morning photography is a completely selfish indulgence.

I do it for myself, if other people like it well and good.

Without taking photos of weddings and babies, I have managed to achieve something which is useful to others.

I choose what I want to photograph. And that makes me happy, and creatively fulfilled.

The second half of my career was much more administrative, and I didn’t realise how much I missed being a “creative”, as journalists and photographers are referred to by management.

A Single Heart Beat Before the Crushing Crowds

What appeals to me about this shot is that in a few hours time it will be full of buskers, tourists and people going to work.

But right now, only the first ferry driver is getting ready for the 5.30 to Manly. Everything is deathly still. I am on the Cahill Expressway, alone except for a homeless guy sleeping on a bench. I take in a vista that tourists would kill for, and I get it every day.

It is the sense of capturing that stillness that is the antithesis of what this place normally is, that really excites me.

Every morning I get an idiot grin on my face, literally.

I am looking at something that only the people who look at my photographs will ever see.

Living in Sydney can be just like living in another big, oppressive city. It is busy, noisy, grinding, not to mention expensive, hierarchical and full of social cliques.

But at that time of day, just after four when I am the only one there, it is my city. And I get to enjoy Sydney at its best — empty.

There is a great transition between night and day.

These colours only last a matter of seconds. I have to be fast to catch them.

This is a shot of Rushcutters Bay, which in my youth was a rather ratty part of town. Now, of course, it’s Millionaire’s Row.

Each morning I set out in the dark and I don’t know what the dawn will look like. I don’t know whether to turn left or right out of my front door. It is a random, almost divining thing, to work out where to head.

It would be boring to go to the same places all the time. I have to find new places, and new vistas. So it is a Surprise Box every day.

I don’t always get the vista I am after, but I always get a surprise.

I am a much nicer person, more sanguine person since I started all this.

Exercise is important. Start your day with exercise and you will feel better.

And mentally, I have to have my eyes turned on all the time.

If you want to create something it doesn’t fall in your lap.

That searching, that struggle, in itself inspires me to keep going.

As the years have passed, my mood has lifted.

I owe this wonderful relief to my morning jaunts, and the absolutely stunning beauty of Sydney Harbour.

Tim Ritchie has worked at ABC Radio for more than 40 years, and still works in audio as a presentation coach. All images are copyright to Tim Ritchie. For purchase or use please contact him through his websites.

He cycles each day from 4am and chronicling the changing face of Sydney. Historians will no doubt thank him. You can follow him on Facebook or Instagram.

John Stapleton first made money out of writing in 1974. He worked as a staff reporter for The Sydney Morning Herald from 1986–1994 and for The Australian from 1994–2009. A collection of his journalism can be found here.