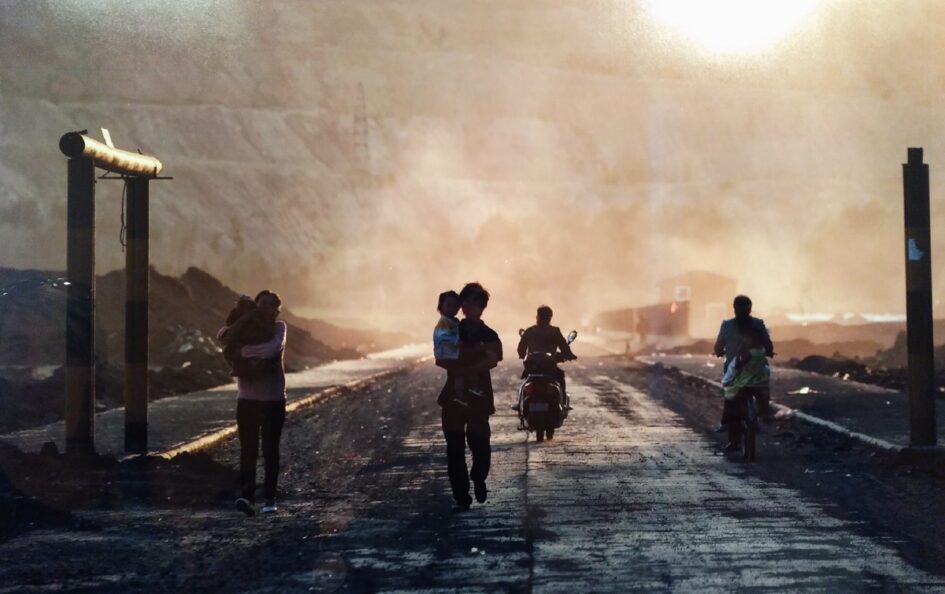 Lu Guang picked up a camera for the first time in 1980, still a teenager. He was a factory worker in his hometown of Yongkang in China’s Zhejiang Province.

After studying in Beijing he became a freelance photographer in 1993, primarily focusing on documentary projects in China.

From humble beginnings, as a multi-award winner Lu Guang and his powerful images became world famous. He focused on some of the most significant social, health, and environmental issues facing China today.

Lu Huang disappeared in November, 2018, while visiting China. Initially there were fears he had been killed by the Chinese officials.

He joins a number of other prominent people who have disappeared or arrested in China over the past year.

It’s not uncommon for individuals who speak out against the government to disappear in China, but the scope of the “disappeared” has expanded since President Xi Jinping came to power in 2013.

Not only dissidents and activists, but also high-level officials, Marxists, foreigners and even a movie star — people who never publicly opposed the ruling Communist Party — have been whisked away by police to unknown destinations.

The widening dragnet throws into stark relief the lengths to which Xi’s administration is willing to go to maintain its control and authority.

In December The New York Times reported that he was still alive but had been arrested in Kashgar — an ancient city in southern Xinjiang that has been at the centre government crackdown on Uyghurs, Kazakhs and other Muslim minorities.

Authorities are said to be keeping a very close eye on anybody approaching the camps.

His wife Xu says she still doesn’t know why Lu has been arrested and says that the police haven’t provided a written notice confirming the detention.

She tweeted: “Family members have already entrusted lawyers to contact the case-handling authorities, and they have not been allowed to meet with Lu Guang, nor have they obtained any formal written procedures.”

“Lu Guang is a deeply concerned citizen. He works almost solely in China, for both linguistic and cultural reasons. His photographs have depicted some of the harsher sides of life in China — AIDS, environmental destruction, pollution and poverty.

“Lu Guang . . . has been my friend for more than 15 years. I’m proud that the agency I co-founded represents and distributes his work. We hope that he will soon be returned to us, safely.”

A photo is a small voice, at best, but sometimes — just sometimes — one photograph or a group of them can lure our senses into awareness.

After moving to New York, he continued to document aspects of the country the Chinese authorities did not want the world to see.

His haunting work on the Aids villages of China won First Prize in the Contemporary Issues category in the 2004 World Press Photo contest.

In the mid-1990s, poor peasants in Henan province sold their blood for 50 yuan a pint, enough to buy two bags of fertilizer.

As a result of unsafe procedures, a large number of them were infected with the HIV virus. Many died. In some villages up to 40 percent of the inhabitants are seropositive.

They were isolated from help not just because of extreme poverty but because the existence of AIDS in China was not officially acknowledged.

Even today, many villagers are uncertain whether they are infected and cannot afford a test, which costs 80 yuan. Organized help from local health authorities is underway, but many people do not have the money to go to hospital and are cared for by family and friends.

We live in an era of heavy government and military manipulation of media and public messaging.

The media’s herd mentality, corporate whitewashing and addiction to cheap copy in an age of collapsing revenue streams have transfigured public debate and the societies journalists once served. But the public outcry is zero. Instead once dedicated readers have just switched off.

A younger generation just look at you in disbelief when you tell them journalism was once a respected profession.

The mainstream media has itself been complicit in its own demise.

It is now a decade since Nick Davies groundbreaking book Flat Earth News tore apart the comfortable notions of journalism as a source of truth, compassion, a way of telling ordinary people’s stories and confronting power with truth.

In this terrible era the work of groups like PEN America is more important than ever.

PEN America works to ensure that people everywhere have the freedom to create literature, to convey information and ideas, to express their views, and to access the views, ideas, and literatures of others.

We champion the freedom to write, recognizing the power of the word to transform the world.

The organisation describes the disappearance reported detention of Lu Guang as a troubling attack on artistic and journalistic freedom.

Lu has not been heard from since November 3.

Lu was traveling in Xinjiang, the northwestern region of China where over one million Muslims are reportedly being held in “re-education” internment camps where they are being indoctrinated to be loyal to the Chinese Communist Party.

China is facing growing international criticism of its mass detention of Uyghurs and other minorities. After long denying their existence, Beijing has begun to acknowledge it runs the camps, justifying them on the grounds of anti-terrorism.

Lu was scheduled to meet a friend in Sichuan province on November 5 but never showed up. Some sources have since reported that Lu’s wife, Xu Xiaoli, has been informed of Lu’s detention; however, his whereabouts remain unknown, as are the details around his arrest and detention.

The Chinese government has been roundly criticized for its rights-abusive practices in Xinjiang, including the practice of forcibly placing Muslims in “re-education” camps where they are compelled to participate in “patriotic education.”

International estimates vary, but the number of “re-education” internees is believed to number in the hundreds of thousands at least.

In October 2018, the Uyghur Human Rights Project reported that over 200 Uyghur intellectuals had been forcibly taken to the camps, a number that is believed to represent only a fraction of the total. In August of 2018, PEN America noted that Chinese Muslim poet An Ran had apparently been targeted for retaliatory action by authorities, for his statements criticizing governmental policies in Xinjiang.

Julie Trebault, the Director of the Artists at Risk Connection at PEN America, says:

Lu’s disappearance is deeply concerning, and we must assume that it is related to his work as a photojournalist, exposing truths about China that the government no doubt would prefer remained hidden.

Unfortunately, Lu’s case is not unique. The Chinese government has a history of disappearing artists who use their practices as a platform to challenge and critique the regime’s policies. PEN America calls on the Chinese government to disclose Lu Guang’s whereabouts and detention status and to release him immediately.

A Polluted China a Polluted World

Lu Guang did a considerable amount of work on pollution in China, much of it on commission from Greenpeace.

“Because China’s economy is moving so fast, the pollution is incredibly severe,” he has said. “As I became aware of the pollution as China opened up the western area, I felt that people needed to know about this.”

Material accompanying his work on development and pollution declared:

Most factories in Hainan Industrial Park of Wuhai City in Inner Mongolia are high-energy consuming and high-pollution producing.

Its economic development has consumed lots of energy and generated plenty of pollution.

A habit of directly discharging unprocessed industrial sewage, exhaust gas and waste material has led to pollution of farmlands, grasslands and drinking water as well as the ocean and the air.

Over the past 10 years, factories have been moved from the country’s east to its central and western parts, thus greatly expanding the polluted area and increasing the severity of the the situation.

Although the environmental protection administration has shut down many small enterprises with serious pollution emission, some still continue to discharge contaminants illegally. Some have adopted covert operations, such as releasing the smoke and gas waste at night.

The sewage channel is embedded into the river and ocean for discharging pollution. Western factories have large evaporation ponds to store sewage, but the sewage sinks into the ground, thus polluting the water source.

Minerals, such as coal and iron, are expanded to large-scale predatory strip mine exploitation from the original underground mining.

Grassland has been turned into desert.

Fertile farmland has given way to barren mountains.

Herdsmen no longer have grassland.

Farmers have lost their farms, their own homelands destroyed, thus causing the villagers to become displaced.

Winds carry the exposed coal dust and sand, causing smog. Smog, in turn, forces middle and primary schools to close. Flights get delayed. The highway gets shut down.

The number of hospital patients with respiratory disease goes up. Food and drinking water is polluted, which leads to cancer, so common China has seen the emergence of ‘cancer villages’. China’s environmental pollution has already exerted great threats to the people’s life and security.

Hugh Brownstone, a prominent photographer, filmmaker and writer, has begun a petition on Change.org calling for Lu Guang’s immediate release.

He describes him as an extraordinary photojournalist.

In his appeal Brownstone writes:

Lu Guang has been awarded multiple times by the World Press; won the Henri Nannen Prize for Photojournalism; and received grants from the W. Eugene Smith Memorial Fund, the Prince Claus foundation, and National Geographic.

His work focuses primarily on the social impact of industrialization in China, but it is universal in its applicability — and as art in and of itself. It is filled with humanity.

In this regard, he follows in the footsteps of renowned photographers from France’s Henri Cartier-Bresson to America’s Walker Evans, Dorothea Lange, Gordon Parks, Margaret Bourke White, Elliott Erwitt, and China’s own Fan Ho.

Once upon a time — like 1933 through 1944 — the United States commissioned many of these same photographers to capture the plight of the less fortunate members of its citizenry. The Farm Security Administration under Roy E. Stryker was not afraid of capturing the truth, but rather sought to enlist it in service of the people.

This is hardly a uniquely American ambition.

Lu Guang’s arrest in China is of no less concern than today’s egregious attacks on the press right here in the U.S. or as far flung as places like Turkey and most recently Saudi Arabia with the government-conducted murder of the journalist Jamal Khashoggi.

This is not a uniquely Chinese issue.

But at the moment Lu Guang’s arrest is a problem only the Chinese can fix. Please join me in requesting that the Chinese government organize his immediate release, safe and unharmed, without restriction. It is, after all, a sign of strength, not weakness, to admit a mistake and fix it.

There are more prisoners, of course. In China alone, there are currently at least 50 journalists imprisoned for vague reasons.

In the long run, free and objective journalism serves all of us, even if, or precisely because, journalists uncover uncomfortable truths.