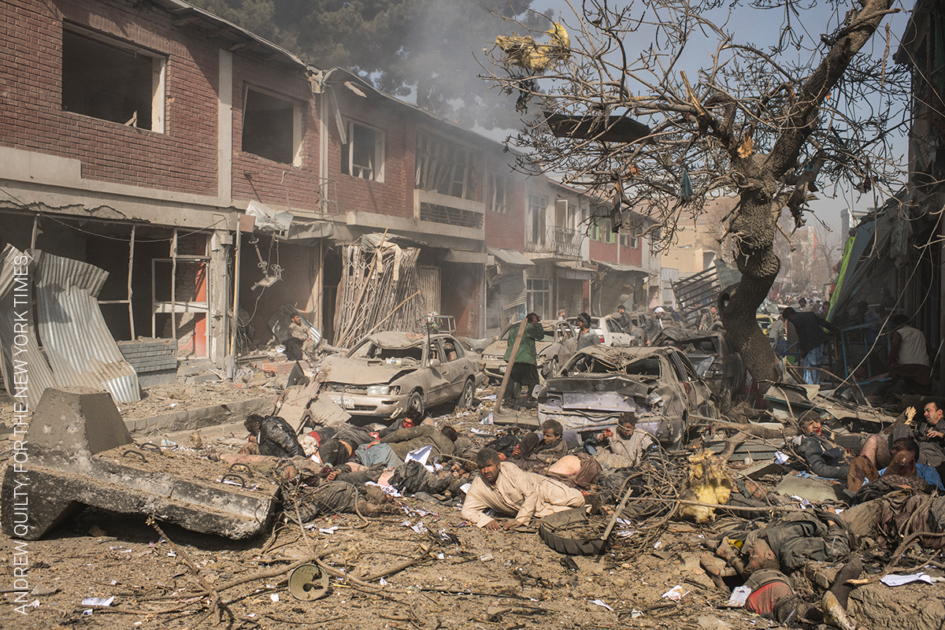 The final nominees for this year’s World Press Photo Awards have just been announced. They are the amongst the best news photographers on the planet.

The 2019 World Press Photo Contest nominees have been filed down to 43 photographers from 25 countries. Categories include General News, Contemporary Issues, Nature, Portraits and Sports.

The winners will be announced in Amsterdam in April. The prize-winning photographs are then assembled into an exhibition that tours 45 countries and 100 cities in the coming year.

An orphaned boy walks past a wall with drawings depicting rocket-propelled grenade launchers in Bol, Chad.

A humanitarian crisis is underway in the Chad Basin, caused by a complex combination of political conflict and environmental factors.

Lake Chad — once one of Africa’s largest lakes and a lifeline to 40 million people — is experiencing massive desertification. As a result of unplanned irrigation, extended drought, deforestation and resource mismanagement, the size of the lake has decreased by 90 percent over the past 60 years.

Traditional livelihoods such as fishing have withered, and water shortages are causing conflict between farmers and cattle herders. Jihadist group Boko Haram, which is active in the area, both benefits from the hardship and widespread hunger and contributes to it. The group uses local villages as a recruiting ground, and the protracted conflict has uprooted 2.5 million people, exacerbating food insecurity.

This image is part of a series on Yemen and is one of the finalists in the World Press Photo Story of the Year.

A woman begs outside a grocery store in Azzan, a pivotal southern crossroads town that had seesawed back and forth between government and insurgent forces.

After nearly four years of conflict in Yemen, at least 8.4 million people are at risk of starvation and 22 million people — 75% of the population — are in need of humanitarian assistance, according to the UN. In 2014, Houthi Shia Muslim rebels seized northern areas of the country, forcing the president, Abdrabbuh Mansour Hadi, into exile.

The conflict spread, and escalated when Saudi Arabia, in coalition with eight other mostly Sunni Arab states, began air strikes against the Houthis. By 2018, the war had led to what the UN termed the world’s worst man-made humanitarian disaster.

Saudi Arabia said that Iran — a Shia-majority state and their rival regional power — was backing the Houthis with weapons and supplies, a charge Iran denied. The Saudi-led coalition implemented a blockade on Yemen, imposing import restrictions on food, medicines and fuel. Resulting shortages exacerbated the humanitarian crisis.

In many cases, conditions of near-famine were caused not so much by the unavailability of food, but because it became unaffordable, priced out of reach to most Yemenis by import restrictions, soaring transport costs due to fuel scarcity, a collapsing currency and other man-made supply disruptions.

Living Among What’s Left Behind

A child who collects recyclable material lies on a mattress surrounded by garbage floating on the Pasig River, in Manila, Philippines.

The Pasig River was declared biologically dead in the 1990s, due to a combination of industrial pollution and waste being dumped by nearby communities living without adequate sanitation infrastructure.

A 2017 report by Nature Communications cites the Pasig as one of 20 most polluted rivers in the world, with up to 63,700 tons of plastic deposited into the ocean each year. Considerable efforts are being made to clean up the Pasig, which were recognized by an international prize in 2018, but in some parts of the river the waste is still so dense that it is possible to walk on top of the garbage.

The living-room of an abandoned home in San Miguel Los Lotes, Guatemala, lies covered in ash after the eruption of Volcán de Fuego on 3 June 2018.

Fuego, around 40 km southwest of the capital Guatemala City, is one of Latin America’s most active volcanoes, and has been erupting periodically since 2002. It is monitored by volcanologists, but this eruption came without warning.

People living around the volcano, many at Sunday lunch, were surprised by the suddenness of the event, as Fuego spewed red-hot lava, ash, poisonous gases and flaming debris onto villages below. The eruption was one of the deadliest in Guatemala for over a century. Guatemala’s National Institute of Forensic Sciences reported the recovery of 318 bodies, over a third of them unidentified.

More than 20,000 people live in Katanga, crowded together and often in extreme poverty. The boxing club receives no outside funding.

From these disadvantaged beginnings, Ajambo, a mother of seven, went on to box in the Ugandan women’s team. Men’s boxing has a long history in Uganda, but women boxers are often frustrated by the few opportunities to compete at an international level.

A wounded child is comforted by his brother in a makeshift hospital after bombing in Douma, on 8 February.

This image is one of the finalists in the Spot News Stories category.

By February 2018, the people of Eastern Ghouta, a suburban district outside Damascus and one of the last rebel enclaves in the ongoing Syrian conflict, had been under siege by government forces for five years.

During the final offensive, Eastern Ghouta came under rocket fire and air bombardment, including at least one alleged gas attack — on the village of al-Shifunieh, on 25 February 2018.

Figures are difficult to verify, but Médecins Sans Frontiѐres (MSF) reported 4,829 wounded and 1,005 killed between 18 February and 3 March 2018, according to data from medical facilities they supported alone. MSF also reported 13 hospitals and clinics damaged or destroyed in just three days.

Reports on the end of the siege in Eastern Ghouta are conflicting, though the Syrian army appear to have recaptured most of the south of the country by July 2018. UNICEF reported the siege of Eastern Ghouta to have ended by late-March, with limited humanitarian access becoming available.

An ambulance packed with explosives killed 103 people and injured 235 in Kabul, Afghanistan, on 27 January 2018.

Victims lie dead and severely wounded only meters from the blast.

Andrew Quilty, one of Australia’s most successful news photographers, moved to Kabul in 2013.

He always carries a camera with him, happened to be nearby at the time of the blast and was on the scene almost immediately.

This image, and the one at the top of this piece, are entrants in the Spot News Stories category.

The ambulance had passed through one security point unnoticed, but although the attacker was identified at a second checkpoint, he couldn’t be stopped from detonating his explosives.

The bombing took place at lunchtime near Chicken Street, a central shopping area popular among foreign nationals, and close to government and diplomatic buildings.

The Taliban claimed responsibility for the the ambulance bombing, considered to be the worst in a string of civilian attacks in the Afghan capital in some months. Taliban commanders said they were intensifying urban attacks in retaliation for increased airstrikes on areas under their control.

Of photographing this scene Quilty says: “It’s hard to put into words. This poor country has been bathed in blood for nearly forty years because of the self-interest of more powerful nations.”

This piece was written and compiled by editor of A Sense of Place Magazine John Stapleton.