Way Back to Last Weekend: Hundreds of Thousands of Australians Rise up in Defence of Civil Liberties 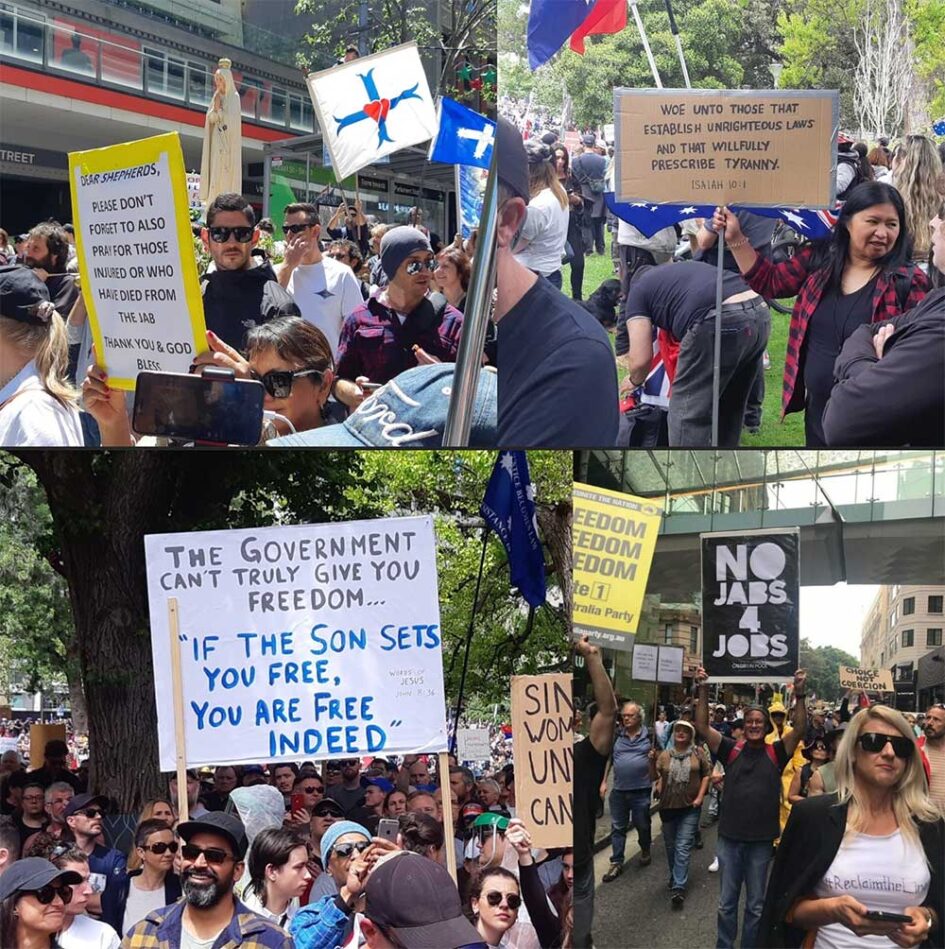 With a rising tide of disbelief over the government’s Covid narrative, many protests are planned between now and the end of the year.

The massive wave of protests in Australia follows months of protests in France, and the rising wave of visible dissent in Austria, and Italy, as governments continue to pursue a hard-line authoritarian course further into the abyss of totalitarianism.

Hundreds of thousands of Australians across states, cities and regional centres turned out on the weekend to demand an end to vaccine mandates, government overreach, and the political hijacking of medicine.

Melbourne had the biggest numbers, followed by Sydney, Brisbane, and Perth.

Despite the multiethnic, and diverse political spectrum, including both “vaccinated” and unvaccinated, some politicians and legacy media downplayed this diversity, as well as the significance of those numbers.

Legacy media did its best to paint pro-government, Antifa, “counter-protesters” as equal in number to the massive protestor presence.

Others, such as The Sydney Morning Herald claimed only 10,000 protesters attended the Sydney march when the number was over 100,000.

In a piece just prior to the day, one Christian news organisation, citing nooses from a minority of problem protesters at one event, demonised the pro-freedom rallies, stating, “just as with coronavirus”, the freedom protests are a “viral social event,” akin to Trump rallies.

It’s worth noting here how some in the bureaucracy, academy and clergy, have shifted from talking about the virus to talking about people as though they were the virus.

After coming dangerously close to equating the rise of protests in Australia with Australians being infected with the COVID-19 virus, the organisation appeared to revel in its claim that “83% of Christians support vaccine passports.”

They then added that the lack of Christian posters at previous protests suggested “many Christians” were avoiding the pro-freedom rallies.

The well-timed article betrays an apparent attempt to discourage Christians from participating in last weekend’s peaceful protests by way of belittling a competitor.

The Christian news platform also resumed its reckless attacks on Caldron Pool, implying that CP’s “tone” was heretical, and “aimed at” inciting a “tiny minority of Christians.”

Their point of apparent disgust was that Caldron Pool provided, free, well-designed posters to assist Christians demonstrating in the pro-life, light and liberty marches.

What’s more astonishing about the Christian news organisation’s article is how closely aligned in tone it is to Channel Seven’s vile pro-segregation segment, inciting division, suspicion and hatred between the “vaccinated” and unvaccinated.

I’ve participated in and observed two pro-freedom marches in my local area.

Each event began with prayer.

Contra to the claims above, Christians were well represented. To add, a number of drivers passing by cheered on those marching, suggesting that protest numbers could have been higher.

All of the hostility came from spectators, some appeared determined to provoke a response from the pro-life, light and liberty demonstrators.

One individual walked past the march yelling at those walking past, “I’m vaccinated, and I’m okay.”

Another, clearly eager for a fight with anyone who’d take the bait, spoke loudly within in earshot of protesters, passive-aggressively labelling the protesters “idiots.”

A group of passers-by gave middle fingers, yelling obscenities, while young men – who would have easily out-matched the hecklers – kept their cool and silently walked on.

Every protester I observed being insulted exhibited an enormous amount of restraint.

They were respecting strict organiser instructions to not engage in any antagonism or hostile confrontations.

It doesn’t get more Christlike.

Contrast this with a report from the weekend alleging that Rebel News’ Chief Correspondent, Avi Yemini was “assaulted by a group of left-wing extremists representing Antifa.”

Additionally, the hashtag trend #freedumb reveals how one side would rather label, name call, and vomit hate on their neighbours than engage in uncomfortable, reasoned public debate.

Despite reckless attempts by media outlets, the two protest groups are spectacularly different.

There is no honest way pro-government overreach media outlets can deny the link between their narratives and heated societal division.

How long can they protect the political class and its politically motivated magnification of the COVID-19 crisis?

The massive wave of protests in Australia follows months of protests in France, and the rising wave of visible dissent in Austria, and Italy, as governments continue to pursue a hard-line authoritarian course further into the abyss of therapeutic totalitarianism.

Its authors, promoters and diverse supporters are another example of the wide range of Christians voicing opposition to a segregated, two-tier society.

What they are opposing is a government ruling its people through fear, absurdity, and fanaticism, where unvaccinated 12-year-olds (well out of reach of the COVID demographic danger zone) can no longer dine at restaurants, or purchase their own clothes.

Where unvaccinated retail employees can spend hours in supermarkets, but not work in their “non-essential” retail jobs.

Where one Body Corporate unjustly tells tenants to “get vaxxed, or get out,” before backtracking on the arbitrary order the same week.

Where neighbour denounces neighbour as a “domestic terrorist” and calls it “justified.”

Where medical professionals are raided and suspended without a warrant for refusing to surrender to the government doctor/patient privilege.

Just as The Ezekial Declaration epitomises the Gospel’s emancipation, protesters epitomise the role of the Church sighing with people wounded by both COVID-19 and COVID-19 government overreach.

Pastoral care is an essential service.

It is the Church choosing to stand – in some cases at great cost – with those suffering from lockdowns, lost jobs, stigmatisation, segregation, “vaccine” complications, and unnecessarily long ostracization from family members.

For two millennia, a primary vocation of the Church has been to be a voice of victory for victims.

When the people fail in this vocation, the people who make up the Church violate its vocation.

Self-justifications padded by a loose application of Romans 13 from “nice” people not wanting to confront or be confronted with not-nice things, is why the fanatical bloodletting of the 20th century was able to go as far as it did.

We recall the huge cost of correcting this every Remembrance Day.

An ethic of niceness is antichrist. It is inconsistent with the Gospel.

“What we are seeing on our streets is a demand for restoration, not revolution. The citizens of the West want their countries back…”

Saturday, November 27 (so this coming Saturday) is the next pro-life, light and liberty march.

Consider finding the pro-freedom Millions March and #reclaimtheline demonstration closest to your location, and making a stand against government overreach, media propaganda, and the political hijacking of medicine.

Rod Lampard, his wife Jonda, and their five kids are home schooling veterans. Rod spent 12 years in management at Koorong, has a Bachelor’s Degree in Ministry & Theology, and since 2018 has been a writer for the theological, politically edgy news site Caldron Pool. A one article contributor to Eternity News, he’s also had articles published by the Spectator, is a popular weekly columnist for Dads 4 Kids, and hosts his own blog.