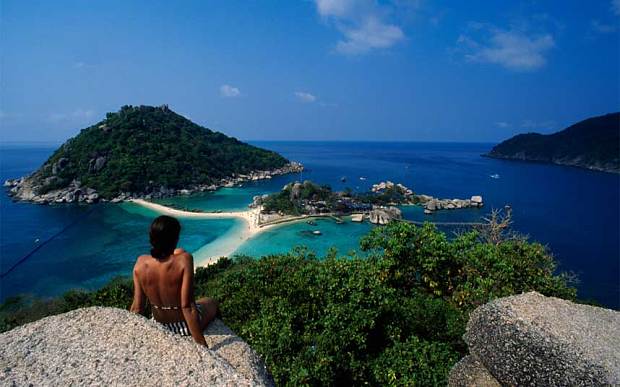 In the week that the ruling military has banned a British book about Thailand’s struggle for democracy, another is about to claim that the tourist industry has gone seriously awry.

“Thailand: Deadly Destination” is soon to be published and attempts to explain why a million fewer tourists are predicted to visit the beach-rich nation this year, following a military coup and the unsolved murder of two British backpackers in September.

The book’s publicity material claims that, in terms of tourist safety, Thailand scores very badly. “In 2014, just as in the years preceding it, there were train, bus, ferry, speedboat, motorbike and car accidents, murders, knifings, unexplained deaths, numerous suicides, diving accidents, robberies gone wrong, anonymous bodies washing up on the shores and a string of alcohol- and drug-related incidents.”

It pulls no punches and paints a bleak image of the future, going on to state: “Thailand has a dying king and serious succession problems, weak democratic institutions, an economy slipping into recession, faces issues of corruption across many of its key services and is host to international crime syndicates, awash with despised foreigners and drifting perilously towards civil war.”

John Stapleton, the author, claims that those who know the country well were less surprised by news of the murder of two British tourists. He said: “The international coverage of the recent brutal killing of two British backpackers on the island of Koh Tao has highlighted what many long-time observers of Thailand already knew, that its tourist industry is poorly managed and the Land of Smiles has come to justifiably be regarded as one of the most dangerous tourist destinations on Earth.”

British author Andrew MacGregor Marshall, whose book “A Kingdom in Crisis: Thailand’s Struggle for Democracy in the Twenty-First Century”, was banned by the Thai government on Tuesday, agreed that tourists should be wary. “It’s sensible to exercise extreme caution while Thailand remains ruled by an unaccountable and criminal elite,” he told Telegraph Travel.

Now fearful of returning to Thailand, even though he has a Thai wife, he was nonetheless prepared for the furious reaction that his book exploring Thailand’s politics might provoke. “Open political debate is criminalised via draconian enforcement of the lese majeste law that outlaws any perceived criticism of the royal family,” he explained.

He said the murders in Koh Tao exposed the dark side of a country loved by many Western tourists. “Thailand is still relatively safe to visit,” he said, “as petty crime is widespread but murders and assaults targeting foreigners are relatively rare. But tourists should be aware that this is a country where things can very suddenly go very wrong, and where there is no credible functioning justice system.

“Many potential visitors are now being deterred due to the military regime and regular revelations of corruption and crime. That’s a tragedy, but it’s sensible for tourists to exercise extreme caution while Thailand remains ruled by an unaccountable and criminal elite.”

The Foreign Office warns Britons heading to Thailand that it is “illegal to criticise the coup and you should be wary of making political statements in public. Over 800,000 British nationals visit Thailand every year. Most visits are trouble-free, but there have been attacks (sometimes violent), particularly on the islands of Samui archipelago.”