The Finalists for Australia’s Leading Portrait Prize The Archibald 2022 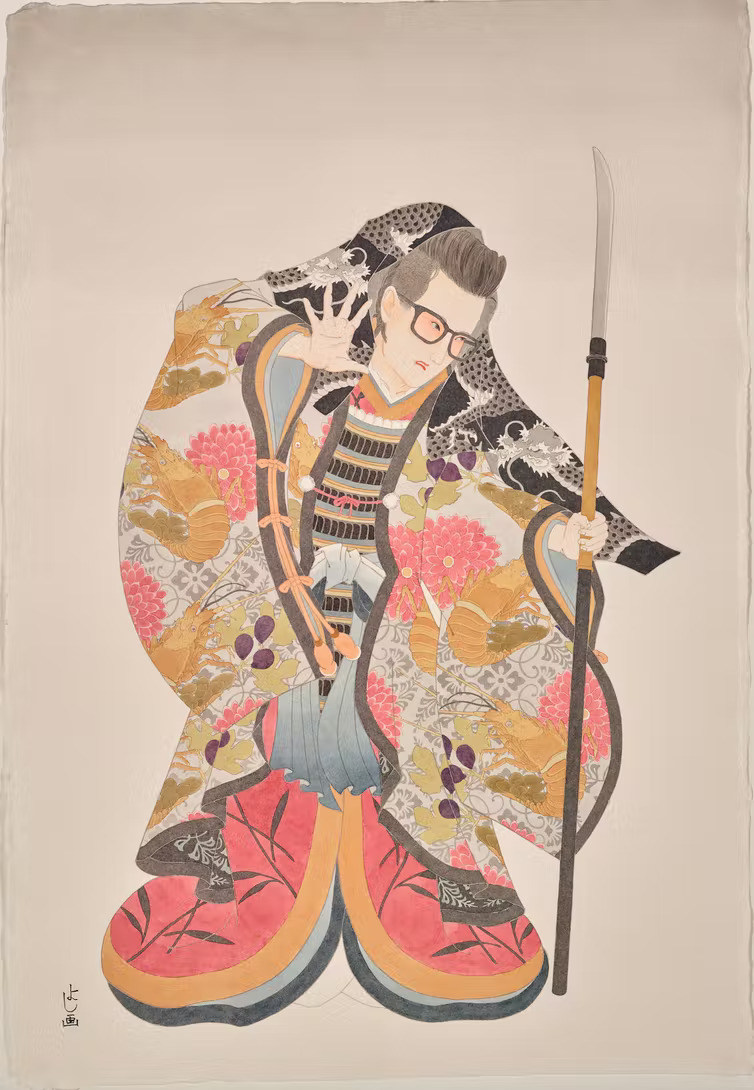 Joanna Mendelssohn, The University of Melbourne.

For those seeking refuge from the election, the 101st Archibald Prize is almost a politician-free zone. Unless you count Joanna Braithwaite’s amusingly titled McManusstan, a portrait of bird lover Sally McManus. Former Labor minister Peter Garrett painted by Anh Do is in the line up – but more accurately described as a rock star.

Braithwaite has painted McManus in a suit that I am guessing she doesn’t own, as it is covered in newspaper stories attacking unions.

This year’s exhibition includes some interesting art as well as people of interest. Both artists and their subjects have issues that our elected officials seem unwilling or unable to solve.

As effective as McManus has been in bringing industrial issues to the fore, Laura Tingle – the fourth estate, painted by James Powditch, is probably more influential for the way she speaks truth to power.

Powditch has entered the Archibald many times before and this is by far his most impressive entry so far. Tingle is painted in profile, looking intently at someone we cannot see.

Her face is superimposed over a collage that includes a script from 7.30, a page from her Quarterly Essay, pages from Simeon Potter’s Language in the Modern World and a fragment of a Bach composition. A multicoloured collage of facsimile engravings by Sydney Parkinson tells of her love of gardening.

The painting that dominates the exhibition is Blak Douglas’ Moby Dickens, a portrait of the Wiradjuri artist Karla Dickens.

Dickens lives in Lismore, Bundjalung Country. Her justifiable anger at the way she and many others have been neglected sparks out of her eyes. She is painted holding leaky buckets while standing in brown muddy water. The 14 clouds represent the 14 days it rained in the first February flood, while government failed to act.

The floods are the subject of at least two paintings in the Wynne Prize, but this Archibald entry says it all. Douglas encapsulates the rage of a people betrayed by an absent government.

The somewhat pained expression on Saul Griffith’s face in Jude Rae’s The big switch – portrait of Dr Saul Griffith, which hangs to the left of Douglas’ work, may give some context to the anger.

Griffith has created a blueprint for Australia to cut electricity costs via solar power and batteries. Most Federal politicians are less than receptive, preferring to cook the planet with coal and gas.

Griffith was also the subject of a portrait by his mother, Pamela Griffith. There is an unwritten rule in the Archibald that only one painting of any subject will be hung, so this sadly went with the great majority to the rejects.

There are many reasons for righteous anger in this year’s exhibition. Mostafa Azimitabar’s self portrait, KNS088, stares at the viewer, confronting us with the way we as a country have been complicit in a crime against humanity.

For many years he was in detention, on Manus Island and then a hotel. He learnt to paint using coffee and a toothbrush. Both materials are used here.

Joan Ross’ ‘You were my biggest regret’: diary entry 1808, seems by comparison to be relatively mild. But her stylised mock-colonial self portrait is mournfully hugging a tree trunk, symbolising the destruction of the natural world by the colonisers in whose steps we tread.

Pleasure in the craft

The exhibition also celebrates those who fight for causes.

Tsering Hannaford has a painting of the Pitjantjatjara activist Sally Scales, painted in the academic style most commonly found in the hallowed halls of gentlemen’s clubs.

Not all creative activists are treated with such seriousness.

Jordan Richardson’s Venus is a portrait of Benjamin Law as Velázquez’s Rokeby Venus, while Avraham Vofsi’s portrait of John Safran as David and Goliath successfully appropriates the style of 19th century academic art, including the gold frame.

Yoshio Honjo’s portrait of Yumi Stynes as onna-musha (female samurai) is painted in the style of a Japanese woodblock print. It is one of many works where the artist has really considered the sensibility of their subjects.

Easily the most successful of these appropriated styles is Claus Stangl’s “3D” portrait of Taika Waititi, the man who gave the world Hunt for the Wilderpeople and What we do in the shadows before making Marvel movies that are actually worth watching.

It is a very clever painting, using thin layers of paint to create a mock 3D effect, gloriously out of focus, and a very worthy winner of the Packing Room Prize.