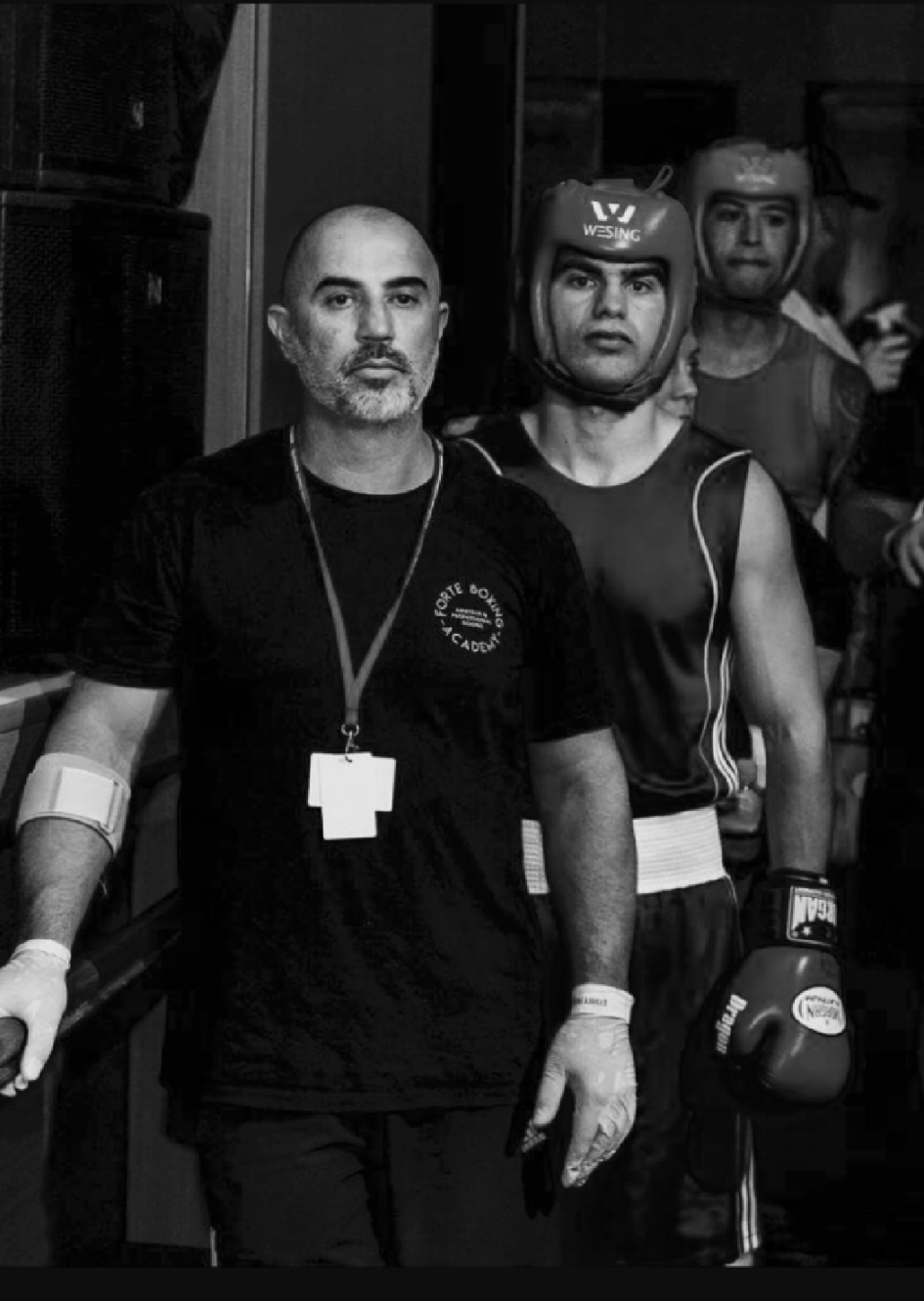 Boxing coach Nudge Mieli, who came from a martial arts background, started boxing to become more proficient with his hands.

“They call boxing the sweet science, and that’s what drew me to it,” Nudge says. “It is the art of hit but don’t be hit.

“Boxing has been rated the hardest sport in the world for the last nine years. It’s requires the most physical training, and at the top level it is 12 rounds, 36 minutes of fighting. Not many people get to that level. It is one to three percent in the world get that far.

“Boxing is 70% mental; you have to build resilience to build true character. It teaches you who you really are because inside those ropes nobody can help you. It’s you and the other guy, who wants to rip your head off.

“I think at different times during the fight you have to look inside and find the true you; it’s at that time when you are down and out you discover how much you really want it, how strong you are, what your strength of character and your level of determination really are.

“For all the routine lessons you learn in the gym and in your training, everyone reaches that point.

“The interesting thing is these people come from ill-disciplined backgrounds to a sport where you need to be very disciplined. That is why kids need it and crave it.

“Every few years some doctor comes out and says how unsafe it is; but they never look at how many people it has saved. They come from such difficult, problematic backgrounds a lot of those people would be dead without boxing.

“Sometimes things just pop into my head, and this is how my blog began. Here are two examples.”

Sounds like a bang at the door “Bang, Bang, Bang…” Ten seconds and it’s time to work.

Stool slides in under the bottom rope, as he sits my hand goes straight on his chest to feel his heart beat, he opens his mouth like a baby bird waiting to be fed, instead my fingers go in and out comes the mouth guard. “Breathe son” I kneel, hand still on his heart my left hand pulls out his trunks and groin guard. My cut man leans through the ropes checks for swelling, cuts or abrasions. He applies the end swell and vasoline. I swap hands on the trunks and instinctively reach for the water that I know will be waiting for me. One or two sips and the bottle is gone.

“Great start mate, jab is working nicely, now we start putting them together. Start just off centre and look for three off the jab. Don’t exchange and use your feet after we shoot the three.”

Bang, Bang, Bang… seconds out, again my hand goes out and the mouth guard is handed to me, as I slide it in he winks, stands, takes a deep breath and walks back to the battle.

By the time I’m out of the ring and the bell rings we resume our positions.

1440 minutes in a day, some fights it’s one some fights it’s four, six or eleven. But it’s that one minute at a time that can change the outcome of not only a fight but the course of a fighters destiny.

Winning isn’t everything… It’s the only thing!

“Winning isn’t everything….. It’s the only thing.”

This saying has rang true since 2012 since our last loss together. Three days after the result and still seems somewhat surreal.

The comeback fight against one of the best in the country, big crowd, main event and everything seems going to plan.

Round 4, three big shots culminating in a knockdown and all of a sudden we are in trouble. The wink and semi smile tells me he is OK. How long to go I ask my corner, 40 seconds is the response I call instructions and he comes back to the corner, calm and composed. We reset and head back into battle. The next four rounds are back and forth, the final bell goes and all I know is that it’s close, very close.

Split decision the other way, not really surprised but I was hopeful we had done enough to get the decision or at least a draw. We leave the the biggest stage we’ve been on to walk back to the room, the punters in the crowd shake your hand pat you on the back and sing your praises….. what a great fight…. tough kid……. I thought he won.

In the room the other fighters look and ask how’d he go ? Split points down I say ….. great fight. No signs of being in a 8 round fight except a little egg on the forehead. As I walk out to assure Em, Nic and the kids he is fine it suddenly dawns on me that a strange feeling is taking over my mind. We lost …… what the FUCK….. we don’t lose.

Almost seven years since we have lost a fight together.

2:30 am I lay awake not being able to escape my thoughts, I question everything we did, everything I said and ponder if it was right.

3:20am I’m dosing off trying to meditate and finally put my mind to rest that we did all we could to have our hand raised.

Winning isn’t everything….. Learning is!

A left hook lands, our opponent looks like a drunk sailor standing at the bar ready to fall.

Go Go Go my second calls from the corner. He instinctively goes after him with a barrage of shots not thinking that one may come back, BOOM…. one not only comes back it lands flush on the chin and in a blink of an eyelid there are two sailors standing toe to toe trying to survive.

“Hold him, hold him,” I scream at the top of my lungs.

The bell rings and I have one minute to go to work. “You OK?” I ask.

“Yeh coach I’m fine.” His eyes start to have a glazed look and I know he is hurt.

“Do not exchange with him….. Do you understand?”

“Just box and move, use your feet.”

It’s at this point I ask my second for the towel. If he gets hurt again the towel is there to protect him from taking any unnecessary punishment.

The Battle Within starts inside my head, am I his coach or am I his dad. The dad in me wants to protect him at every cost, the coach in me wants to give him every opportunity to get through the next round and win the fight. I tell myself to switch on and be his coach not his dad, I instantly yell instructions which I know he will follow to a tee and keep him safe.

The coach takes over from dad and he not only gets through the fight but wins by a wide margin on two of the judges cards. A hug at the end of the fight from coach turns into an embrace from dad. That battle within will never go as a dad is simply a dad.

This piece was driven by the superb coffee of Village Fix at Shellharbour on the NSW South Coast, without doubt the best in the Illawarra. Originally published 28 June, 2021.