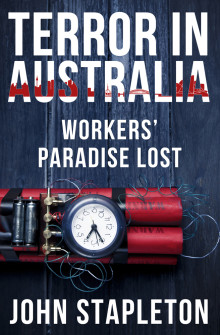 Terror in Australia: Workers’ Paradise Lost, by veteran journalist John Stapleton, is a sidewinding missile into the heart of Australian hypocrisy. It becomes available this week.The book is a beautifully written snapshot of a pivotal turning point in the history of the so-called Lucky Country. In 2015 there were well attended Reclaim
Australia demonstrations in every major capital city, all protesting what the demonstrators saw as the growing Islamisation of Australia, along with countering anti-racism demonstrations. There were frequent violent clashes, hundreds of police were forced to form lines separating the demonstrators in
Sydney and Melbourne, there were a significant number of arrests and injuries, and dozens of people were treated for the effects of capsicum spray. The terror alert was at its highest level in history, the country was engaged in an unpopular and discredited war in Iraq and Syria, and relations between the government and an increasingly radicalised Muslim minority had broken down.

In recent weeks Australia has dispensed with the services of its Prime Minister Tony Abbott. While the pundits have
generally looked at Tony Abbott’s poor opinion poll ratings and the ailing economy as the reasons for his demise,
there is no doubt that his mishandling of the country’s national security was a primary factor in galvanising his
opponents to move against him.

As critics declared, Abbott had become that most dangerous of creatures, a failed war Prime Minister. Prior to his
election Abbott barely mentioned national security. Afterwards, he spoke about little else, repeatedly appearing at
press conferences flanked by senior members of the defence, police and intelligence community.

In a multicultural country with a strong indigenous heritage, Abbott’s repeated references to a Christian God, from
his maiden speech in Parliament through to his concession speech, alienated many in the country. His justification
for the abysmally counterproductive re-entry into the war in Iraq, the bombing and killing of Muslims in Iraq and
Syria, the endangering of Australia’s defence personnel as they were deployed close to areas held by Islamic State
militants, along with threats to outlaw the tens of thousands of Muslim fundamentalists within Australia and his
criticisms of Muslim leaders, was all justified within the rhetoric of a crusader God. The Jesuit trained Prime
Minister referred literally hundreds of times in press conferences to Islamic State as a “death cult”, rhetoric other Western leaders have avoided. Terror messaging experts repeatedly warned that labeling Islamic State a death cult aroused rather than dampened interest, attracting recruits to Islamic extremism. The Prime Minister refused to
listen.

“I believe that one of the principal reasons Tony Abbott lost his place as Prime Minister was that his colleagues had become increasingly concerned about his mishandling of that most important of issues, national security,” author John Stapleton says.

“Despite the billions being spent on expanding the government’s security apparatus, including massively increased
surveillance of the Muslim minority, authorities believed another terrorist attack was inevitable. While in person
Abbott could come across as a traditional hail-fellow well-met Australian character, I believe his election and the
country’s deteriorating security situation clearly demonstrates the intertwining dangers of religious conviction and public office in a modern democracy.”

At the same time as politicians were mishandling broader issues, a demoralised, depressed population, saddled with increasingly grotesque over-regulation, turned inwards, increasingly questioning the wisdom of big spending  governments and the failed social and economic creeds of the past.

On the streets once vibrant entertainment districts were desolate, while closed and shuttered shops became a
characteristic of many suburbs.

John Stapleton graduated with a double major in Philosophy and Anthropology and worked as a general news reporter for two of Australia’s leading newspapers The Sydney Morning Herald and The Australian for almost a
quarter of a century. His books include Chaos at the Crossroads: Family Law Reform in Australia, The Twilight Soi,
Hunting the Famous and Thailand: Deadly Destination.

Terror in Australia: Workers’ Paradise Lost becomes available on Amazon this week and will become progressively available at other digital outlets, including iBooks, Barnes & Noble and Google Books, over the next month. It will be available in paperback later this year.

Here is a link to the single most contentious chapter of Terror in Australia: Workers’ Paradise Lost titled Soldiers of God. It centres around Tony Abbott’s appearance at a Countering Violent Extremism Conference in Sydney where he continued his frequent misuse of the phrase “death cult” to describe Islamic State, despite frequent warnings from terror messaging experts that the phrase was arousing rather than dampening interest amongst Muslim youth. He also, as he did throughout his parliamentary career, made frequent references to a Christian God before a multifaith audience. It was, in the author’s opinion, a thoroughly disgraceful performance.

Recent books from A Sense of Place Publishing include:

Travels with My Hat by Christine Osborne.