Shockwaves in the wake of the China-Solomon Islands Pact 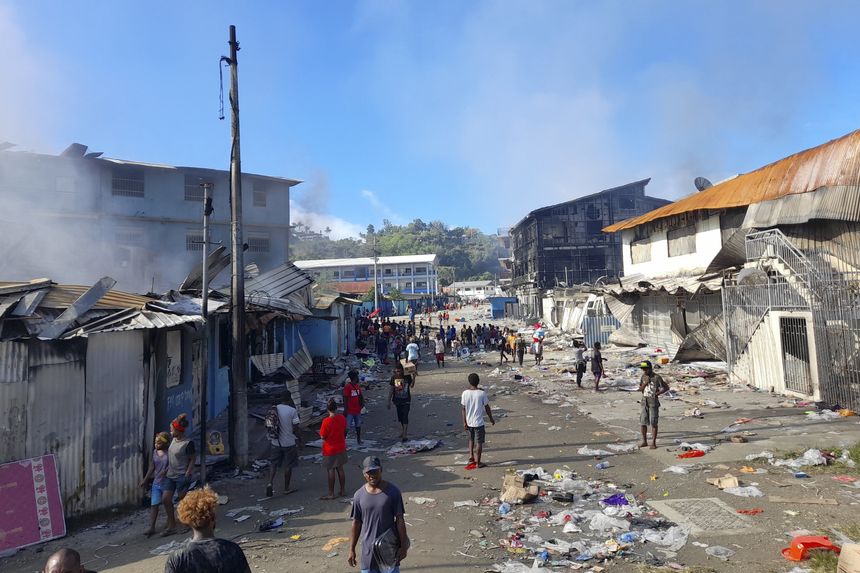 Like the Hunga Tonga–Hunga Ha’apai volcano that triggered a massive tsunami and sent shockwaves around the world when it erupted on January 15, the recently signed security deal between the Solomon Islands and China has also unleashed geopolitical convulsions of immense magnitude.

The source of the spectacular volcanic eruption that was visible from space came from deep below the surface. Similarly, the controversial security deal, and Australia’s alarmed response to it, also goes deep into history.

Solomon Islands Prime Minister Manasseh Sogavare has repeatedly described the China deal as an assertion of sovereignty. (Critics say it is the opposite.) China added to this discourse by accusing the Australian government of “disrespectful colonialism” in its unsuccessful attempts to dissuade Sogavare’s government from formalising the deal.

Yet Prime Minister Scott Morrison defended Australia’s response, claiming his government did not want to repeat the “long history” of telling Pacific nations what to do. Morrison added,

I’m not going to act like former administrations that treated the Pacific like some extension of Australia.

Morrison is absolutely right about one thing – there is a long history shaping the recent deal. But were the Solomons treated like an extension of Australia? Did Australia exercise colonial power over the nation? Most crucially, how can Australia correct past mistakes and move forward given the new regional reality?

Britain colonised the Solomon Islands from 1893. Unlike British New Guinea, where Britain transferred colonial control to Australia after Federation in 1901, the Solomons stayed under British control until 1978, when the islands gained independence.

That Britain was taking control of the Solomons at the end of 19th century was a comfort to Australians in ways that echo the present. At the time, Australia was deeply “concerned” about “Great Powers […] now established in the South Seas within a few days’ steaming distance from Eastern Australia, especially Queensland”, wrote Brisbane’s Courier Mail.
It continued:

It is a great pity […] that the colonial statesmen of former days had not foresight enough to grasp the importance of these South Seas territories and secure them, for their strategic as well as productive value.

And in words that sound remarkably like those being articulated now, the article predicted “we will have to spend millions […] because of the nearness of bases of possible hostile operations”.

The “Great Powers” in question in 1898 were France, which was attempting to control all the islands south of the Solomons (present-day Vanuatu and New Caledonia) and Germany, which had claimed the arc of islands from the northern Solomon Islands into New Guinea (excluding British New Guinea in the southeast).

Australian politicians had aspired to Britain controlling all South Pacific islands on their behalf from the 1870s. This was articulated by Australia’s Monroe Doctrine, which held that Australia, backed by Britain, exclusively presided in its region. France and Germany challenged it in the 19th century, but the notion persisted along with Australian security concerns.

Although Australia did not officially colonise the Solomons, Australians exercised colonial powers there in other ways. The most egregious and devastating was through labour recruiting, which began in the islands around the 1870s.

It is estimated some 19,000 Solomon Islanders worked on Queensland sugar plantations before most were repatriated in 1902. Recruiter mistreament sparked cycles of violence in which white people were killed and then these killings were avenged with official and unofficial punitive expeditions.

During – and after – the second world war

Small numbers of traders and planters, many from Australia, established enterprises in the islands. Missionaries came too. But it was not until the Battle for the Solomons, which stretched from August 1942 to December 1943, that Solomon Islanders experienced colossal intrusions into their island homes.

Some Australians participated in this epic episode, but it was predominantly US forces fighting to halt the Japanese advance on Australia. The importance of these islands to Australia’s security was horrifically demonstrated.

After the war, and with decolonisation happening at a rapid pace, Australian politicians thought about how this wave of independence would affect the islands and how Australia might shape that change to preserve its security.

The idea of a “Melanesian Federation” was suggested. This would bind Dutch New Guinea (which became part of Indonesia in 1969), Papua New Guinea and “The British Solomons”. But this idea relied on the new nations buying into it. They did not.

Another idea was incorporating New Guinea, and possibly the Solomons too, as a “seventh state” of Australia. Future Australian governor-general John Kerr plainly articulated in 1958 the sticking point for this security guarantee. Australia would have deal with “racial problems” that “we would have to solve on the basis of equality and genuine acceptance of New Guinea people in Australia”.

These ideas did not happen and many Pacific nations have remained closed off from economic opportunities that would have drastically improved lives and permanently bound Australia to Pacific nations through transnational communities.

The root causes of the Solomon Islands’ problems since independence can be found in economics. Australia may have played a leading role in peacekeeping through the 2003-17 RAMSI Mission, but it did not take bold action on economic issues.

Almost 13% of Solomon Islanders live below the poverty line and just 70% has access to electricity. China now seems to be offering an economic panacea that Australia did not.

Australia has to shed its longstanding aversion to Melanesian migration. Economic (rather than racial) exclusion is now the barrier keeping Pacific Islanders out of Australia. Communities have come via “the New Zealand pathway”, Samoa, Tonga and Fiji, and established themselves in Australia. They have created a vital remittance economy that has been even more important during COVID with the collapse of island economies.

Very few Australian residents originate from the strategic islands that arc around Australia’s north. If people from these nations do come to Australia, it is through temporary means such as educational programs or the Pacific Labour Scheme, which allows for employment in meat works, agriculture, trades and cooking, hospitality and care.

Recently, this scheme has suffered terrible publicity with many workers claiming they were subjected to “slave-like conditions”, bringing to mind the Queensland plantation labour history.

Now the geopolitical situation has become precarious, Australian politicians are again thinking about the islands and how major adjustments are needed to the ways things are done. A parliamentary committee reported in March 2022, suggesting ideas about compacts of free association, similar to those the Marshall Islands, Palau and the Federated States of Micronesia have with the United States. It also suggested more Pacific-friendly migration policies like that of New Zealand. The impacts of climate change are going to make all the pressures of life on Pacific islands more acute in the coming years.

Australia must take bold steps to reinforce its Pacific relationships and secure its strategic interests. Taking the humanitarian approach and integrating with the Pacific islands is not only right – it is also the best way to support Australia’s interests and shed its colonial legacies.