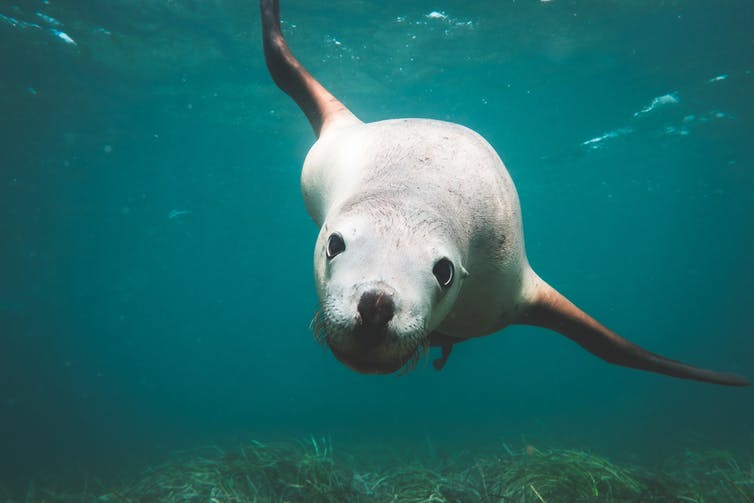 Humans have amazing fingertips. They are sensitive and can be moved over objects to feel its softness, texture, size and shape. These movements are both complex, and “task-specific”. This means that you adopt different movements depending on what you want to feel about an object. We squeeze or push objects to judge softness, and feel around the edges of objects to judge size and shape. And if you wanted to feel the texture of an object, you would sweep your fingertips over the surface.

Being able to adopt different movement strategies shows that we can precisely control our fingertip movements and draw on our past experiences in order to pay attention to important aspects of an object – the edges of shapes and the surfaces of textures, for example. This means that we have a high level of control over our sensory perception, and we call this active touch sensing.

Most mammals do not have as moveable or sensitive fingertips as humans. Instead they have whiskers, which are touch sensitive hairs on their faces, and used to guide locomotion, foraging for food and to explore objects.

Neuroscientists have been studying whiskers for decades, especially in laboratory rats and mice, trying to understand how signals from the whiskers are processed in the brain. But only now are we realising that whiskers are also moved with amazing strategies, just like our fingers.

Rats, mice, and some other mammals, can move their whiskers in a to-and-fro scanning motion called “whisking”. Whisking is one of the fastest movements that mammals can make, occurring up to 25 times per second in mice.

When rats and mice contact objects they also adopt other whisker movements. These include bunching up their whiskers to make more of them touch a surface, making light touches to enable clearer signals against a surface, and slowing down whisker movements so they contact the surface for longer.

But no one knew whether animals could adapt their whisker movements specifically for different tasks.

Such “task-specific” movements would be an exciting discovery as it would indicate a precise level of control over their sensors and perception.

The first step in answering this important question was to choose a likely candidate species for our investigation.

Pinnipeds, including seals, sea lions and walruses, have whiskers that are particularly thick and long, making them easier to measure than those of smaller mammals such as mice.

They also have some of the most sensitive whiskers of any mammal – they can detect textures and shapes to the same sensitivity as human fingertips, even in cold water when our fingers would go numb.

They are also moveable. We have previously found that California sea lions make the largest and most controlled movements with their whiskers, when compared to harbour seals and Pacific walruses.

Those factors, plus their ability to perform object-discrimination tasks – where they could distinguish between objects based on size and shape – made California sea lions the ideal subject for our investigation on task-specific whisker movements.

Our work with Lo

For our study we used a sea lion, Lo, for the full complement of experiments. Having only one individual is common in marine mammal studies, but it does put pressure on the investigators to collect good quality and highly quantitative data from that one individual.

Lo was trained to complete a texture-discrimination task using only her whiskers.

Lo was filmed doing the tasks thousands of times, and her whisker and head positions were tracked in the video footage.

Looking at the data and the video footage it was clear that Lo made task-specific movements with her whiskers. She made sweeping movements over textured surfaces, and felt around the edges of the different sized shapes. These specific movement strategies are also used by humans with our fingertips. https://www.youtube.com/embed/q9LvzwJSB8M?wmode=transparent&start=0 The sea lion, Lo, participating in different tasks for this study.

The ability to switch whisker exploration strategies between tactile tasks enabled Lo to complete the tasks efficiently. Lo found the correct fish in almost all trials and made decisions quickly, in under half a second. Video footage of the other sea lions also showed them employing the same strategies, so we think that this might be common among California sea lions in general.

And now other animals

It is likely that other species of Pinniped will be able to make task-specific whisker movements, since they also have sensitive, moveable whiskers. We are investigating this now, along with other species of carnivores, such as otters.

This is the first time that task-specific whisker touch sensing has been documented. It demonstrates that studying whiskers can give us important insights into animal movement control, as well as their perception and cognition.