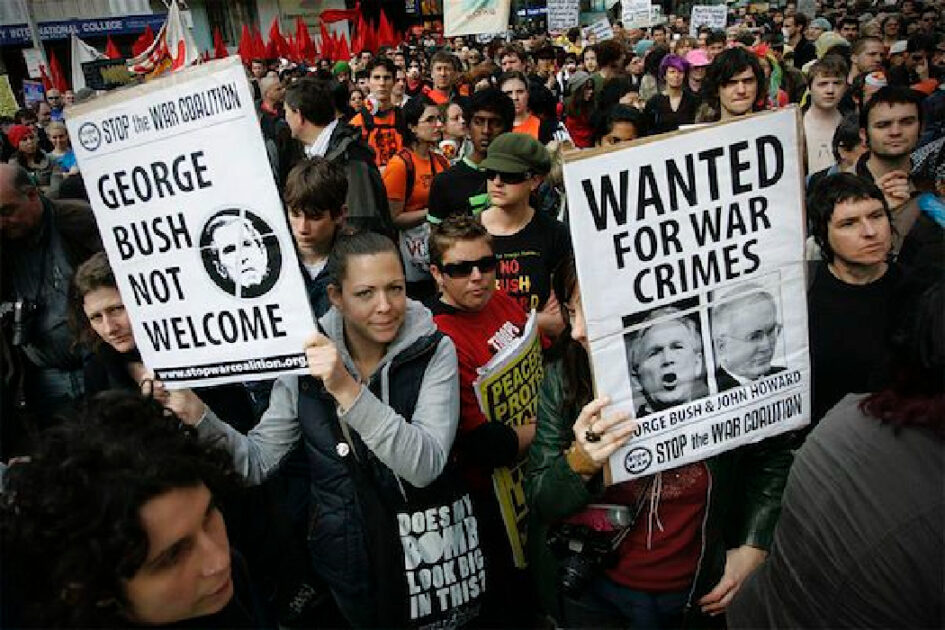 Our alliance with the U.S. helps keep its war machine rolling, but the cost to Australia must be more carefully considered, writes Stephen Darley.

ON 16 FEBRUARY 2003, I was walking along North Terrace, Adelaide. Nothing unusual in that, as I live there. But surrounding me and in all directions converging on Parliament House, some 500 metres away from my location, were 100,000 other people.

Soon, we ground to a halt — no more progress was possible, such were the crowds of South Australians voicing their opposition to the coming Iraq war. Our subservient Howard Government was obediently and in fact enthusiastically joining it, at the beck and call of then U.S. President George W. Bush.

I never got to hear the speeches on that day and neither did the great majority of my fellow marchers. Even if organisers, Network Opposing War And Racism (NOWAR) – whose coordinating committee I shortly joined – had anticipated such an enormous turnout (they didn’t) there is nowhere in this city to accommodate such a rally — unprecedented in Adelaide’s history. Similar scenes were occurring in many other parts of Australia and indeed around the world.

We couldn’t hear the speeches, but we could talk to each other. And the testimony of the families and singles, young people and old, men and women, made it even clearer what a unique event this was — the great majority had never been in such a crowd, never mind a political rally before.

Some were nervous, looking uneasily around for the “peacenik” stereotypes that the mass media relentlessly spewed out about such an event. Most were amazed by the size of the turnout. But all were determined that we would not and should not slip into yet another unnecessary and ugly war for Uncle Sam.

It’s a historical record that we didn’t stop the war or Australia’s involvement. Politicians and commentators have somehow interpreted that as a kind of endorsement of then Prime Minister John Howard‘s determination. In fact, what it really showed was the limits of “democracy” in Australia.

It is often said that for every one person at a rally there are nine others who support their cause and concern. If we follow that logic, most adults in Australia (and even more of our young) were voting against this war. But our lords and masters had decreed that we needed to show support for our great ally, or we would not be protected from such dire threats as Iraqi President Saddam Hussein‘s weapons of mass destruction (which of course were a myth and a massive, knowing lie).

So the global protests didn’t stop the war and it went on to become even bloodier, more protracted and more inconclusive than the peace movement claimed (similar to the U.S. war in Afghanistan started by the same crew two years earlier). In many ways, the Iraq war continues today at a lower level of intensity — and Iraqis are far from being better off as a result of it. U.S. troops remain in occupation of some areas and are just as unpopular as such invaders always are or become.

And who has benefited from this war? Iraq and Iraqis certainly haven’t. I believe the U.S. only aids Iraq’s decline (which the war accelerated). But as nearly always with war, military-industrial corporations have made many billions of dollars of profits and continue to do so.

I am a member of the coordinating committee of Independent and Peaceful Australia Network (IPAN), who are trying to do what the Howard Government conspicuously failed (didn’t even attempt) to do in 2002-3: to ask Australians what they thought of going to war and the costs and consequences of the U.S. alliance which drew us into it.

IPAN’s People’s Inquiry asks those questions. It’s no substitute for a proper democratic approach to the alliance, but it’s a start – one which no Australian government has had the ethical fortitude to even consider.https://www.youtube.com/embed/YbzNLjWnkJA?rel=0&wmode=opaque

Stephen Darley is a migrant to Australia from the North of Ireland and has been a political activist all his adult life, mainly in the nuclear disarmament and peace movement and secondarily in the environmental movement.

If you would like to submit your thoughts on the costs and consequences of the U.S. alliance, please click here: People’s Inquiry.IPAN will be conducting a Webinar titled ‘U.S.-Australian alliance — on defence and foreign policy‘ on 25 March 2021 at 6 pm AEDT.