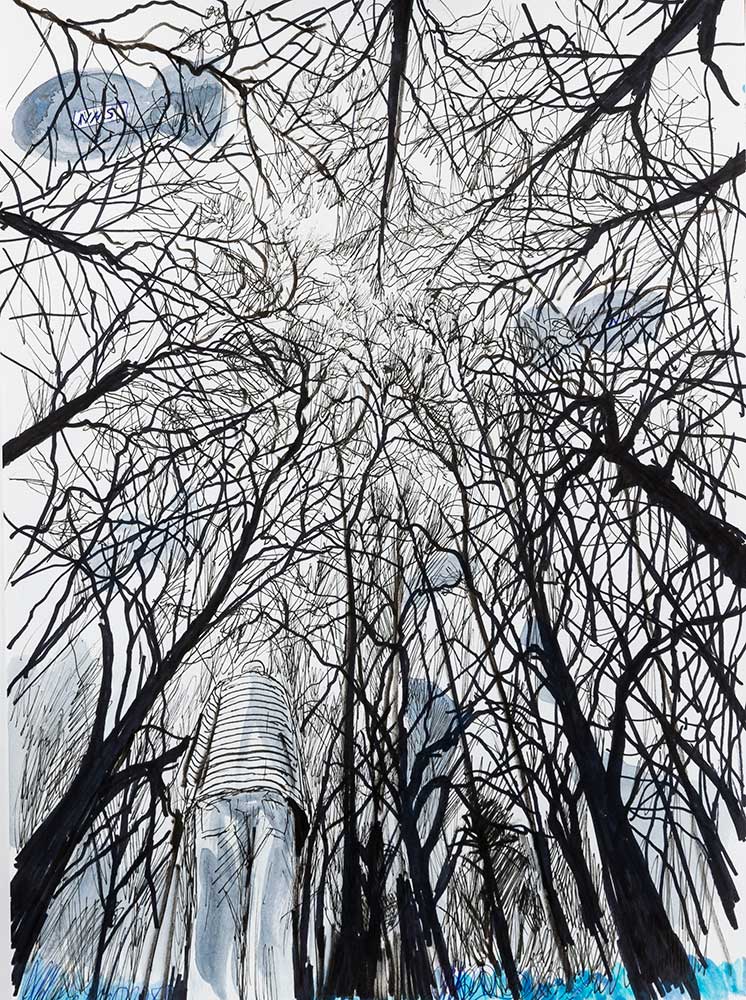 By Professor Ramesh Thakur: Spectator Australia. Featuring the Art Work of David Downes from his COVID 19 Series of Paintings.

In lighting the way out of the nightmare of serial lockdowns, new New South Wales Premier Dominic Perrottet has said three interesting things. Australians are born into freedoms, not granted them as a privilege or concession by governments. Health policy is a subset of the total responsibility of governments which also includes the social, economic and human impacts of public health measures. Following from this, the principal responsibility for health decisions lies with ministers; health experts should be on tap but not on top, to tender advice that ministers accept, modify or reject.

Chief Health Officer Dr Kerry Chant was notably absent from Perrottet’s inaugural press briefing. Several journalists seemed shocked. Over twenty months of being spoon-fed official handouts on the pandemic and fuelling the global panic, reporters have lost professional curiosity, the instinct to interrogate the official narrative and the capacity for independent research. Sharri Markson has done world-beating investigative work to highlight the scientific establishment’s collusion in suppressing questions on the origins of the virus. In Unfolding Catastrophe, John Stapleton tells the story of Australia’s response through the eyes of a veteran reporter.

This still leaves scope for broader inquiries into pandemic management strategies. Here’s a list of hard-hitting questions for journalists to pursue.

Q1: Governments listened to scientists. What science did the latter base lockdown decisions on to overturn the settled science summarised in the World Health Organisation report in October 2019, which argued against lockdowns and social distancing because they ‘can be highly disruptive, and the cost of these measures must be weighed against their potential impact’?

Starting with Professor Neil Ferguson of Imperial College London in March 2020, models have turned out to be spectacularly wrong. Many US experts predicted a worsening situation in August-September. ‘And what actually happened? Cases plunged by 40 per cent, hospitalisations by 30 per cent and deaths by 13 per cent,’ wrote David Leonhardt in the New York Times on 8 October. Locally, ‘Modelling gets Covid hospitalisations peak wrong’, read a headline about NSW in the Australian on the 12th. How many, other than the modellers, were surprised?

Q2: How critical, accurate or flawed has Australian modelling been in developing Covid policy?

In an article on 4 October, Leonhardt noted ‘the Delta variant led to a surge in cases lasting somewhere from one and a half to two and a half months’. This can be seen in most places around the world, with no discernible correlation with the timing or severity of lockdown restrictions and mask mandates (cue Sweden, Florida). Most recently, Norway’s cases have continued to fall since the lifting of all restrictions.

Q3: Data from around the world are persuasive revalidation of the pre-Covid consensus on the futility of lockdowns. Can we definitively abandon lockdown as a policy tool?

Outlawing peaceful protest and the harsh enforcement of restrictive measures by police, riot police and the military have drawn unfavourable global attention to Australia.

Q4: Are Australians concerned about shifting the needle of governance settings to the CCP model of enforcing obedience to government diktats?

Dr Jenny Harries, CEO of the UK Health Security Agency, said on 10 October that Covid is no longer the most significant threat to health. UK’s top killer in May-June 2020 and January-July 2021, Covid has occupied the second spot after Alzheimer’s/dementia since 25 July. Covid ranks a lowly 26 among Australia’s leading causes of death.

Q5: Were we panicked into unprecedented health-driven restrictions on our daily lives and activities by dodgy data and claims from China totally disproportionate to the criticality of the virus threat to Australians’ health? How can we avoid a repeat of such catastrophism in the future and retain balance and perspective?

The singular focus on the global pandemic prioritised Covid over other health threats. Many health and mental health outcomes worsened by diverting resources, putting regular screenings on hold and cancelling or deferring scheduled treatments. British experts fear that with reduced immunity, there could be 60,000 flu deaths over the coming winter, making it potentially the worst flu season in 50 years. The ABS reports 4,199 (6.2 per cent) excess Australian deaths from 1 January to 30 June 2021, compared to the same period in the 2015–2019 average. Cancer, diabetes and Alzheimer’s/dementia have been particularly hard hit.

Q6: Should we launch an urgent investigation into the reasons for and prevention of thousands of deaths above historical averages?

Vaccines are neither necessary nor sufficient to deal with Covid. On the one hand, the infection and mortality curves peaked and bent downwards with full vaccination rates of just 2.4 per cent in India – where the Delta variant originated – and 5.7 per cent in Indonesia. Some will argue their data are not as complete, accurate and reliable as data from Europe and America. Even if that were true, and case numbers and deaths were, say, ten times higher (which is extremely doubtful, but let’s concede), this still would not affect either the vaccination coverage statistics from the two countries, which should be fairly accurate or the shape and chronology of the infection and mortality curves and gradients of the upward and downward slopes.

For the full list of 13 questions go to the original article here.

Patrick Downes work can be seen and purchased at his website here.