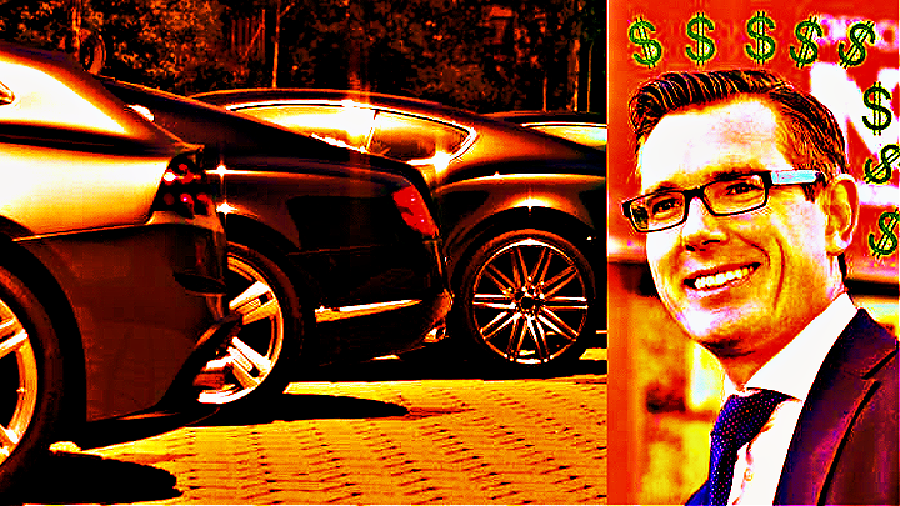 Acting NSW police commissioner David Hudson flagged the scenario of his officers pulling up a young person driving a luxury sports car and questioning them as to how they came to be behind the wheel of such an expensive vehicle, as harsher NSW unexplained wealth laws were being spruiked.

Standing beside NSW premier Dominic Perrottet on 23 June, the senior police officer outlined that unexplained wealth laws currently confine the confiscation of property considered illegally obtained if a crime has first been committed and investigated by law enforcement.

Hudson told the press that while the new property seizure regime would still be reliant on a court order, the laws would allow police to get ahead of the game in terms of targeting individuals in relation to wealth they cannot readily explain away.

Prompted by a Labor unexplained wealth bill introduced that same day, Liberal Nationals ministers agreed to the proposal during an emergency cabinet meeting on 22 June, which not only included measures to seize civilian property but also laws to target the use of encrypted devices.

While the new laws, which will be introduced in spring, are being promoted as a means to target criminal networks and incapacitate them financially, civil liberties experts assert that too often than not those caught up by such laws aren’t crime bosses, but family members and even activists.

“When governments seize money, the innocent wife and kids can become destitute, without a home in some cases and with no access to family bank accounts,” he told Sydney Criminal Lawyers.

During the announcement of the law reform package, NSW police minister Paul Toole outlined that the new laws will permit police to target suspect individuals whose wealth appears to far exceed what’s set out in their tax returns.

According to Rowlings, an increasing focus on unexplained wealth laws is due to government profiteering from the seizure of criminal assets. And he pointed to former ACT attorney general Gordon Ramsay, who admitted to having put on extra DPP staff to specialise in such prosecutions.

“Perhaps Mr Perrottet could explain how taking someone’s money stops crime,” the civil liberties advocate quipped. “All it really does is encourage criminals to commit more crime to replace the money they think the government has stolen from them.”

In NSW, following an individual having been convicted of a crime, the Confiscation of the Proceeds of Crime Act 1989 (NSW) provides for property derived from or used in the commission of serious crime to be seized. This involves three types of orders to confiscate property, profit and drug money.

But it appears Perrottet has his eyes on amending the Criminal Assets Recovery Act 1990 (NSW), which allows the NSW Crime Commission to confiscate property – without conviction – if the Supreme Court finds it “more probable than not” that it’s the result of serious criminal activity.

The reforms will heighten the ability of authorities to seize property and finances considered to be beyond the ability of those in its possession to own based on their legitimate earnings, and this will be enhanced via new stop and search powers specifically related to unexplained wealth.

Sparking the Coalition announcement, Labor’s reform bill proposes that the Supreme Court would issue an unexplained wealth order “if satisfied, on the balance of probabilities”, that a person’s assets are greater than their “lawfully acquired wealth”, with the burden of proof being on them.

“WA has had the most draconian proceeds of crime and unexplained wealth laws, along with the NT,” Rowlings advised. “Two years ago, highly regarded former WA Chief Justice Wayne Martin was tasked to produce a model set of laws fairer to everyone.”

In his review of the WA laws, Martin recommended the entire regime be revoked and new laws be drafted from the ground up. He also cited the well-known case of a local mother who had her house seized following her ex-husband being convicted of drug trafficking seven years after he’d left her.

“The new laws are about to be implemented in WA,” the CLA chief executive explained. “The new NSW laws must not be more extreme than what Martin recommends.”

The war on encryption

The NSW government is also taking this lawmaking opportunity to implement a system of “new prohibition orders to target high-risk individuals likely to use dedicated encrypted devices to avoid law enforcement”, which are unlikely to be confined to organised crime.

This is in line with a general nationwide crackdown on encryption, which the Turnbull government ushered in back in mid-2017, and, over the following years, was legislated into action by then home affairs minister Peter Dutton via a series of national security bills.

Perrottet is currently waging a war against climate defenders, and a prohibition on encrypted messaging is likely to be used to target them. NSW police applied current confiscation laws late last year in an attempt to seize a Blockade Australia activist’s car, which she’d been living in.

“You can bet a new form of secret surveillance will be involved if the government is targeting ‘dedicated encrypted devices’”, Rowlings said, adding that the Israeli Pegasus spying software was only discovered last year, after it had been used by governments to monitor activists and journalists.

“All these ‘you-beaut’ secret systems end up being used against the good guys, even though police and authoritarian governments tout that they’ll only be used against criminals.”

As to why both the state government and the opposition have announced tougher unexplained wealth laws, Rowlings responded, that there’s “an election in the offing about seven to eight months from now” and “scaring the electorate is all both major parties are good at nowadays”.

Rather than focusing on ever-escalating tough on crime measures and “vote-buying schemes purportedly legalised by dodgy legislation”, Rowlings asserts, the Perrottet government might be concerned with how to “create a better and fairer and smarter society”.

“How about focusing on the law-abiding citizens of the state, and bringing in a Human Rights Act, to benefit all the people of NSW,” he suggested in conclusion. “After all, Queensland, the ACT and Victoria have such acts.”