Phfen Shock: Yearning for the Chasm 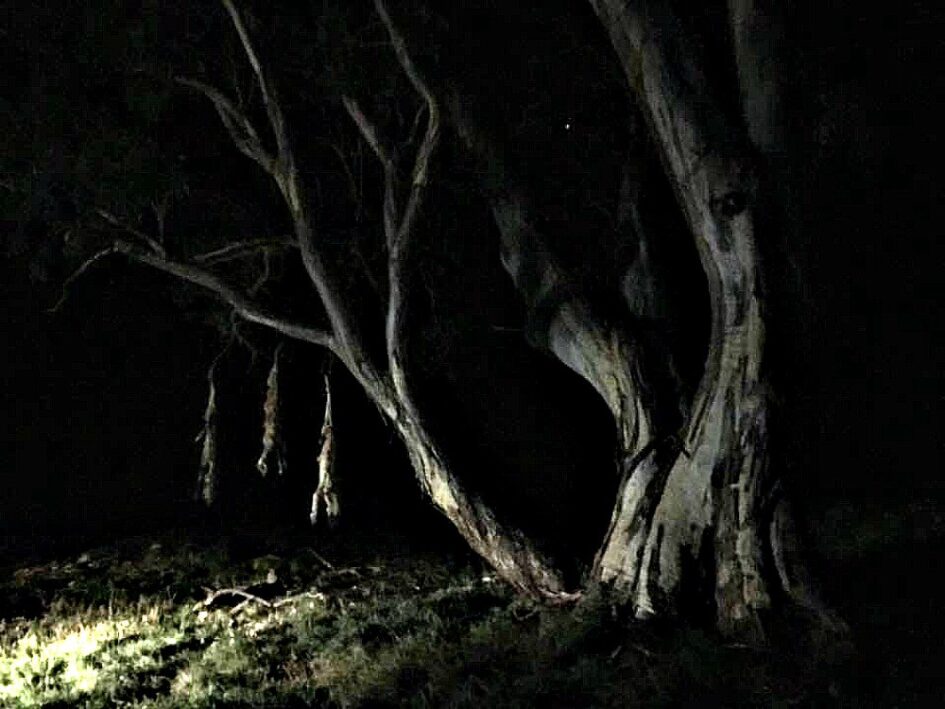 Phfen Shock. The words kept repeating through his head, although he could find no definition, no logical reason.

That was the sensation, he discovered, when you arrived at a new place expecting welcome, the village beyond the veil, only to discover as you lay awake in the horror hours, that your mind was picking across the valley floor detecting danger.

Giant wombats, larger than any he had seen in other parts of the country, romped in the fading light. Rabbits picked across the disappearing pastures. A few lichen coated apple trees, remnants of the orchards from a century ago, still survived. Around, the deep forest.

His species, born in hostility, was ever alert to threat.

It was the shock of somewhere new, somewhere different. Where, when you entered a new valley, even a neighbouring valley, it took time to determine where the threats lay. Unseen. Lurking. Ready to strike. Born in dangerous times in a dangerous world. Surrounded by malevolence. By those who did not wish you well.

He had found himself there, one dark and immutable period, by happenstance, perched above that strange valley. House sitting a farm. Two useless dogs, three donkeys, four chooks. And a rooster.

He expected to enter a period of enormous creativity, and instead curled into a ball ready to die. The smallest target possible. Invisible to the roving forces. He did not trust any of them. Could in an instant become oceanic. Invisible. Inchoate. All at sea. And entirely undetectable.

A Screen He Could Not Enter

It was pretty but unlovely, that valley with the bracken edging across the pastures and the surrounding forest closing in.

Cleared at enormous human effort, once an orchard with thousands of trees, planted by one loving, hard working, damaged family all those years ago; their house, the mud dab house still intact.

He didn’t, at first, understand why the place was so unsettling.

It was only when he heard the stories he began to understand.

Why it felt as if some tragedy had destroyed the place, and yet there it was, a picturesque valley a century on from disaster, when a fireball swept down through from the forest and destroyed everything, everything they had ever worked for, all in minutes.

The patriarch died a broken man. The matriarch died brokenhearted. The children scattered across the Highlands.

And even now, all these years later, with the orchard destroyed and the surrounding forest reclaiming the land from humans, he could feel the tragedy; everything these people had worked for, the lives they had built in this remote place through such remarkable industry, disappearing in an instant. A whole way of life gone, just in an instant.

Instead of being industrious, he just went into some sort of profound shock.

There were times he could hear them thinking, out there. And others when his mind rooted around for threat, and they gathered there in their bored ranches, more worried, like all good public servants, about their contracts than the target or the task at hand.

Days passed without pen in hand. The record broken.

A massacre in Afghanistan. 53 dead on first reports. Promptly disappeared from the consciousness of all but the immediate families and neighbours. In a land used to tragedy.

Pedestrians were mowed down in Toronto. The mayor promptly claimed the city proud of its diversity. More lies. The same as Australia. Lie after lie after lie to defend a failed theory. Until those who knew the truth, how this engineered debacle had come about, had all died, been eliminated, or were in retreat.

Now, the machines were difficult if not impossible to detect. Invisible drones. Micro-cameras. Who knew if they had given up, or simply withdrawn to a safer distance.

But there it was, a mystery. His mind swept across an unmarked valley. Primordial in nature. Fabulous in intent. Complex as only machines could be; as if they, too, had sown organic machines across the galaxies and this was just one fine reach, far, far away.

Our politics . . . dreadful, a black comedy pregnant with collapse, its actors exhausted, without imagination or courage or principle, solely obsessed with pillaging the tawdry jewels of office and fleeing into distant sinecures as ambassadors or high commissioners, or with paid up Chinese board posts, while outside the city burns.

Our society grows increasingly more unequal, more disenfranchised, angrier, more fearful. Our institutions are frayed. Our polity is discredited, and almost daily discredits itself further. Our screens are filled with a preening peloton of potential leaders, but nowhere is there to be found leadership.

Holderlin, the great 19th century poet, wrote of the “mysterious yearning toward the chasm” that can overtake nations. Increasingly, one can sense that yearning in the overly heated rhetoric of some Australian politicians and commentators. That yearning can overtake Australia as easily as it has many other countries, damaging our democratic institutions, our freedoms and our values.

A Mysterious Injustice: A Place Where No One cared

He was rising from the ether, being reborn, marking out territory. He was defying the worst the society had to offer. He was carried through his own mysterious yearning. And then away, away, as if he could not focus, as if he could not stay intent on one narrow grievance, as if the gods were welcoming him to a safer place.

While all around lay a mysterious injustice. A place where no one cared. No one took any pride. Where the shops were dilapidated, as the country sank into Third World status.

On a trip to Sydney, that morning, the only Australian accent he heard were the housos at Gavin’s cafe in Redfern.

They were checking the value of a collection of stolen Ray Bans on their equally stolen iPad.

Working out how long they would take to sell. How long it would take to score. The days were short. They were not comfortable outside. Inside their cluttered, dilapidated, filthy Housing Department flats, equally uncomfortable. There was always someone screaming, shouting abuse. There was always someone trying to score. There were never enough drugs. Not enough drugs in the world.

The collapse of the underclass, the surest sign of a sick society, was well advanced.

And all around, no one hoped. Sydney had become the worst city in the country. Crowded, bogged, grasping, vicious, and they were led by the greediest, shallowest, most vicious leader the country had ever seen. For the despair of the country led directly from the arrogance at the top.

Old Alex drove, like so many, straight back out of town, away from the city he had once loved so much, through crowded highways, past derelict shops.

Back to the Primordial Valley

To be watched, he assumed, by the surveillance machines. As they always watched. Invisible. Silence. Seemingly eternal.

They were being monitored, there on the remotest outposts of human thought.

Sometimes, he thought, the humans would have been better. At least he could hear their thoughts.

Even in this place, the bastardry of the government knew no bounds.

Most mysterious of all, as the country drove ever more rapidly backwards, ever closer to the chasm, was that nobody cared.

An unforgivable death in an ancient stream.

What was this world we had entered so abruptly?