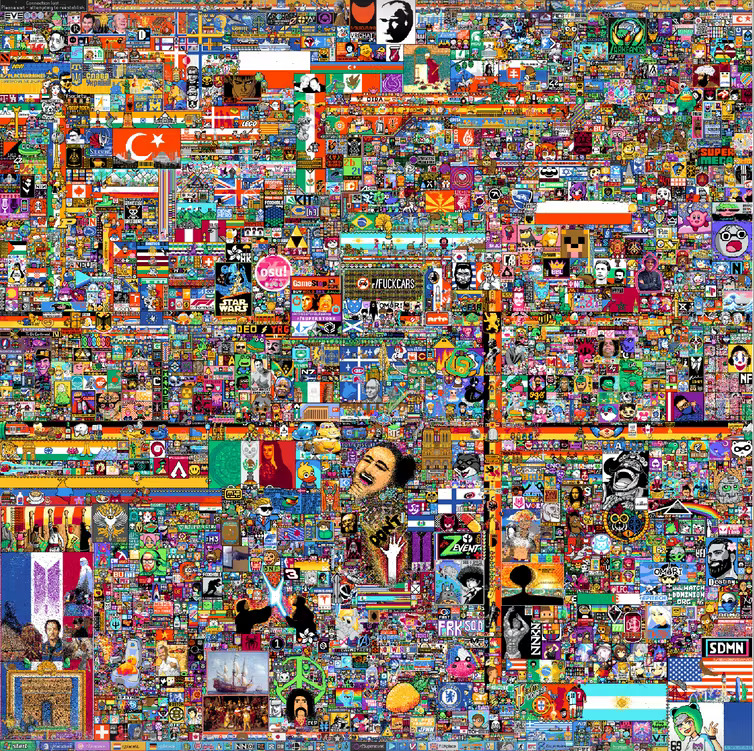 Many would be familiar with Reddit as one of the largest social networking sites, with a large group of forums (“subreddits”) catering to almost any interest.

Since the beginning of April, Reddit has played host to a massive collaborative art p roject called r/place that simultaneously shows us some of the best and worst attributes of cybercultures.

Originally launched in 2017, r/place ran for 72 hours. The lifespan of the new r/place was also short – ultimately lasting for just five days. Beginning initially as a blank canvas, r/place allows users to place one coloured pixel every five minutes (or 20 minutes for unverified accounts) as they attempt to build a collective art piece.

Traversing through r/place takes you for a journey through time, memes and cultures.

At any one moment you might be looking at a Nine Inch Nails logo, the flags of various countries, a QR code linking you to a YouTube video titled The Most Logical Arguments AGAINST Veganism (In 10 Minutes), and a homage to Zyzz – a popular bodybuilding figure who passed away in 2011.

Some artworks on r/place don’t seem to represent anything at all. The sole mission of The Blue Corner is (you guessed it) to have a blue corner depicted on the final art piece.

The artwork constantly changes over its short lifetime. But even if the drawings of some communities may not go the distance, the time lapse videos depicting the ongoing mutation of the canvas has become a key part of this art piece, ensuring all contributions play a vital part in the lifecycle of r/place.

r/place shows us the collaborative nature of humans in online spaces. After its emergence in 2017 it was hailed as “the internet’s best experiment yet” and praised for capturing “the internet, in all its wonderful glory”.

This collaborative online art project allows people to express their individuality as well as collective identities formed through interactions with online spaces.

This year’s iteration of r/place, in contrast to the previous version, demonstrates the interconnectivity of communities in digital spaces. No longer is r/place solely reserved for Reddit users. Now, there is clear power in drawing on communities distributed across Twitch, Discord and Twitter.

This influx of communities from all over the internet has not been well-received by all.

There is a belief Twitch streamers are ruining the work of smaller communities and are attempting to sabotage the project.

Instead of being a democratic representation of online communities and their art, the argument goes, Twitch streamers are encouraging their fans, numbered in the hundreds of thousands, to capture hotly contested territory.

Factions – such as those formed between Spanish streamers and BTS fans – have become the primary way to ensure power and influence over the art project.

Smaller communities are driven out at the expense of larger influencers with more bargaining power in this pixel warfare.

It is not just individuals taking part in this art project. Many believe “bots” are running rampant, performing automated tasks in a way that is antithetical to the idea of this artwork as a representation of human achievement as opposed to technical prowess.

These examples are just a fraction of the chaos over the internet in the last few days: 4chan operated coordinated attacks on the Trans flag and LGBTQ+ panels, and streamers are receiving an influx of death threats.

The best and worst of us

At its best, r/place is a powerful illustration of strangers coming together about their passions online and the collaborative nature of the internet.

At its worst, it represents everything we have come to dislike about the internet: the exclusion of smaller voices at the expense of influencer cultures, factions between communities, and the toxicity of some cybercultures.

Whatever the case, this project has been great for boosting Reddit’s publicity as the company goes public.

In its final moments, users could only place white tiles and watch the spectacle of a once vibrantly coloured collaborative art piece that caused so much chaos among online communities simply transform back into a blank canvas.

In the last nine days the 72 hour time lapse condensed into four minutes and 31 seconds has been viewed by more than 5.2 million people.

To watch in full: