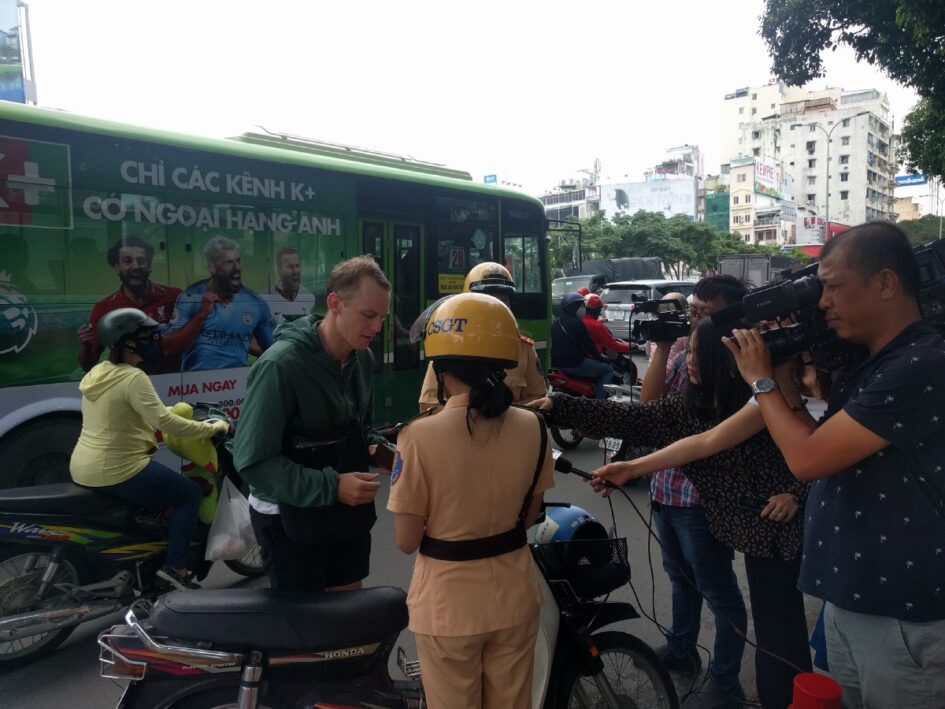 Saigon police have launched a major campaign against foreign motorbike riders in an attempt to curb the nation’s shocking road toll.

For two weeks before the start of the two-month campaign on the 16th August, officers will apprise foreign tourists and expats about traffic rules. Foreigners will be let off with warnings for violations during the two-week period.

Road crashes are a leading cause of death in Vietnam, killing almost one person every hour. More than 18,720 accidents occurred last year, killing 8,244 people and injuring nearly 14,800, according to the National Traffic Safety Committee. Vietnam Express.

Many bike rental services require foreign customers to only furnish their passports and not driving licenses.

With media in attendance for the photo opportunity, at a street corner in Ho Chi Minh City’s Central District 1 this week police stopped three foreign motorbike drivers for paper checks. Only two of them possessed a driving license. The other was let off with a warning.

One of those pulled over was James Crafter, a supply chain expert with a Masters of Business Administration degree from RMIT Vietnam.

His paperwork apparently in order and the cameras rolling, he was treated in a particularly friendly manner by officers.

Asked by a reporter what he thought of being pulled over he replied:

If it raises awareness, I think it’s a good thing.

With neighbouring countries, particularly Thailand, having acquired an extremely poor reputation for tourist safety, Vietnam is an increasingly popular destination both for expats and tourists.

Safety standards are noticeably higher, and the population is not as overtly hostile to foreigners as in other countries suffering the destructive impacts of mass tourism.

Saigon received more than 4.2 million foreign tourists in the first half of this year, a 10 percent jump year-on-year. It expects 8.5 million to visit this year.

Saigon, or Ho Chi Minh City as it is officially known, has a population of just over ten million, many of whom ride a motorbike.

There are roughly eight and a half million motorbikes puttering around the city each day, contributing to chaotic yet fluid traffic flows. That means there are more bikes than there are households.

More than 750 new motorbikes are registered every day.

To the uninitiated Saigon traffic is unbelievable. Even crossing the street on foot can be a major challenge.

But the traffic is remarkably efficient at keeping things moving when you consider that to the untrained observer it appears not to be governed by any discernible rules.

I consider myself an excellent motorbike rider.

I took advantage of the state of the law in New Zealand during the 1970’s and had secured my bike licence before I’d turned 16.

My first bike was a 350cc Triumph 3TA and that was followed by a 650cc BSA Lightning. A few years later I rode a friend’s 600cc BMW from Germany, south through Switzerland to Italy and then caught the ferry from Brindisi to southern Greece. It was in northern Greece that I was forced to ride the bike in the snow. It was February and my quest for better weather was utterly thwarted but in the process I became one of the few people who have ridden a motorbike on snow covered roads and lived to boast about it.

I believe this experience qualifies me as an unusually accomplished motorcyclist.

But nothing could have prepared me for the streets of Saigon.

Firstly, there are no ‘Stop’ or ‘Give way’ signs anywhere in the city. There are traffic lights but they are considered little more than suggestions by most bike riders. The result is that every intersection is a potentially deadly game of chicken.

There is no ‘right of way’ as we in the West understand the concept. If you are riding along a road, anybody pulling onto it from a side street or driveway, does so with total impunity. They don’t even look! It appears to be the responsibility of everyone riding along a main road to make way for anybody joining the traffic flow from anywhere else.

The result is a lot of accidents. This in turn, guarantees that traffic is both very slow and very dangerous, the worst possible outcome. Fast and dangerous or slow and safe would both be better options.

Westerners should not feel particularly targeted. Most of the foreign expats and tourists in Saigon are from other parts of Asia, including Korea and Japan.

Nor is the campaign in Saigon only targeting foreigners.

Last month the city police began a month-long campaign against DUI (driving under the influence), speeding, failure to wear crash helmets, street racing, and other violations in all of the city’s 24 districts.

Most Vietnamese ride slowly most of the time, but nonetheless many can show you at least one scar from a previous accident.

Adding to the pandemonium of Saigon traffic is the predominance of what I call ‘nanna-bikes’ or bikes that your grandmother would ride. They have automatic gears, no clutch and provide the rider with only four possibilities; go, stop, left or right. They can be effectively ridden by a paraplegic monkey and require less skill than walking across the road.

Another fascinating variable is the predominance of beer drinking in the local culture. When this is combined with unlicensed riders on nana-bikes careening around the streets with no law enforcement or laws to be enforced, it’s no wonder that the emergency crews and hospital staff are on perpetual high alert.

Then throw in the impact of unbridled cell phone use.

It’s not uncommon to see somebody on a motorbike frantically texting with one hand while the entire family, mother, father, a couple of kids and maybe even the family dog, hang on grimly behind them.

To those of us from the over-regulated West, it’s all completely mind boggling.

So, it was with great trepidation, despite considering myself an elite motorbike rider, that I reluctantly mounted a 150cc Honda and hit the streets of Saigon.

I’d lived here for eight months before I took this potentially suicidal plunge. During those months I studied the way the roads functioned, paying particular attention to the way the professional ‘Grab’ riders negotiated the mayhem, ferrying paying customers around the city.

Grab, for the uninitiated, is Saigon’s version of Uber.

Another truly amazing aspect of all this is the complete absence of road rage.

In any western country, every roundabout would be the scene of a constant, 24/7 brawl. The normal carnage at Saigon’s intersections would be augmented by the added perils of physical violence and verbal abuse that are common features of many of the far more regulated roads found elsewhere.

After living for more than 30 years in Sydney, Australia and having observed the relentless advance of speed cameras, booze-busses, drug-busses and cops on every corner in patrol cars bristling with cameras and the latest surveillance technology, Saigon traffic at first appeared liberated and paradoxically safer.

The Vietnamese were free to do whatever they liked and didn’t need cameras or booze-busses or any of the rest of the tsunami of new rules and fascist nonsense that has inundated Australian transport networks over the last 40 years.

I find myself wondering if some middle way is not possible. Some system that balances safety with efficiency while not being over-regulated to the point where road users feel like their fundamental rights are being ripped away from them as they drive along the road.

Saigon doesn’t appear to suffer the same congestion problems that are crippling other similar-sized Asian cities like Bangkok, Jakarta, Phnom Penh, Beijing and New Delhi, to name a few. These other cities are more regulated (some even have ‘Stop signs’) and despite corrupt police in many of them, their roads are subject to local variations of the rule of law. Many, however don’t cater for such a large proportion of motorbikes and their roads are predictably clogged up with cars, trucks and busses.

My advice to anybody coming to visit Saigon is; don’t ride a motorbike under any circumstances.

Many longtime expats will disagree with me. They like the frisson and the freedom. Riding a bike is not just cheap and convenient, it makes them look and feel more like a local.

But when I watch some fresh-off-the-plane backpacker getting onto their just rented bike and heading out into the traffic, I just shake my head.

If you do get on the back of a motorbike, make sure the rider is experienced and sober.

The best solution in my view is to book the aforementioned Grab, which works for both taxis and bikes.

In my experience, the drivers are well trained and reliable. Like Uber, the technology means they have to take you the shortest possible route, rather than the traditional tour.

And the online bidding system means you are paying Vietnamese prices.

If you are only in Saigon for a short time, you are far better off just downloading the Grab app to your phone.

No amount of experience riding in other countries will help you here.

Normal rules do not apply.

Saigon is a truly fascinating place, rapidly assuming its rightful place as one of the world’s great cities. There are many reasons to visit.

Just make sure you don’t go back home in a coffin.