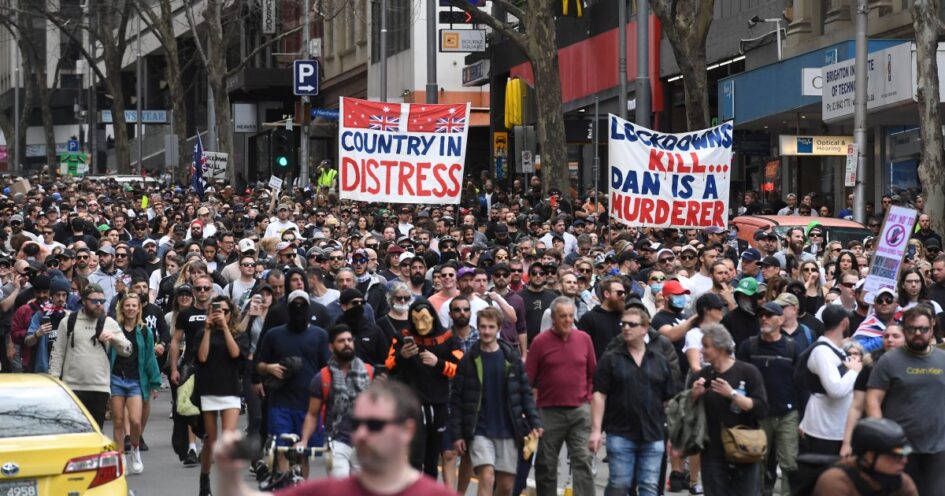 With two of an older generation’s favourite singers, Joni Mitchell and Neil Young, having chosen to walk the plank, the Joe Rogan/Spotify controversy is still going on and has only gotten more vitriolic and intense.

Claims that Spotify must walk away from its $200 million contract with the world’s most popular podcaster for allegedly promoting vaccine misinformation have sparked a lot of debates about freedom of speech, online censorship, what exactly those terms mean, and whether they can be correctly applied to the practice of Silicon Valley deplatforming.

When confronted with accusations of quashing free speech and promoting censorship, those who support online deplatforming in this or that situation will often respond with lines like “It’s not censorship, it’s just a private company enforcing its terms of service,” or “Nobody is obligated to give you a platform,” or “Freedom of speech isn’t freedom of reach,” or by posting the famous XKCD comic which says “If you’re yelled at, boycotted, have your show cancelled, or get banned from an internet community, your free speech rights aren’t being violated. It’s just that the people listening think you’re an asshole, and they’re showing you the door.”

And of course it’s true that nobody is legally guaranteed the right to speak on an independent online platform. But even if we ignore the fact that this censorship behaviour is not being driven solely by the wishes of independent corporations and is in fact happening in increasingly close coordination with the US government whose officials openly threaten Silicon Valley platforms with repercussions if they don’t regulate speech, the fact that it is technically legal for those companies to silence voices they don’t like is not a sound argument. It doesn’t prove that censorship isn’t happening or that the deplatforming is okay, it just proves that it is technically legal for those giant monopolistic platforms to do those things. A casual glance at history shows that plenty of terrible things have been done which were perfectly legal at the time.

To really answer the question of whether the increasingly widespread practice of Silicon Valley censorship via algorithm and deplatforming is a major problem and whether an increase in speech restriction is desirable, we need to take a step back and ask ourselves why free speech even matters in the first place. Why is it something that’s written into constitutions and upheld as sacrosanct in so many nations? Why is it a value we’re told has supreme importance all our lives?

Any debate over online censorship will necessarily remain superficial until you can address this question at a fundamental level, because otherwise you’re just bleating noises at each other about “free speech” without being clear about what exactly you’re talking about and why it matters. This is why those debates tend to stagnate.

The American Civil Liberties Union takes a solid stab at answering this question by offering “Three Reasons Why Freedom Of Expression Is Essential To A Free Society“.

Firstly, that “The right to express one’s thoughts and to communicate freely with others affirms the dignity and worth of each and every member of society, and allows each individual to realize his or her full human potential.”

Secondly, that free expression is “vital to the attainment and advancement of knowledge, and the search for the truth.”

Third, that it is “necessary to our system of self-government and gives the American people a ‘checking function’ against government excess and corruption.”

Virtually all debate about online censorship revolves solely around the first reason listed, which is essentially that people should have free speech because freedom is nice to have. This is unfortunate, because it’s easily the least compelling of the three. If your entire argument boils down to “I should be free to say whatever I want on this online platform because muh freedom,” it’s basically just you laying out a narrative about what you think you should get to do which holds no more inherent weight than anyone else’s narrative about what you should get to do. “You can’t shout ‘fire’ in a crowded theater” gets stretched into “Your freedom to say whatever you want about vaccines on this social media platform is less important than the need to convince everyone to get vaccinated,” and the conversation stalls out there.

That changes when we consider the ACLU’s second and third reasons why free expression is important. Suddenly we’re no longer talking about how Johnny Facebook would prefer to be allowed to post QAnon conspiracy theories because it makes him feel nice inside, we’re talking about the good of society as a whole. If the case is strong enough, then it really doesn’t matter if an app isn’t technically part of the government because it’s still a part of society, and arguments about the needs of the collective trumping the rights of the individual crumble because this is all about protecting the needs of the collective.

So how strong is that case? Well, let’s take it apart and have a look.

The argument is essentially the same in both the second and third reasons for free expression put forward by the ACLU: that allowing people to freely share ideas and information leads to positive change. In the case of the second it’s talking about positive change in society, and in the case of the third it’s about positive change in government. But in both the idea is essentially the same: the free flow of speech lets the collective sort out truth from falsehood and conduct itself accordingly.

In short, free speech matters because it’s how the status quo gets changed. It’s how society collectively figures out that racism is undesirable, that women are equal to men, that science is superior to superstition, and that the world perhaps does not work the way we once thought it did. It’s also how society figures out that a government has become inundated with “excess and corruption,” that status quo systems aren’t working, and that new systems are required.

Now here’s the kicker: if free speech matters because it’s what allows the collective to change the status quo, then it is exactly those voices who oppose the status quo whose speech must be adamantly protected. The speech of those who support the mainstream orthodoxies of the political/media class is vastly less important than those who dissent from those orthodoxies, because only the latter is pushing for change.

What we have now is just the opposite: if you adhere to the mainstream orthodoxies of America’s Dempublican uniparty there is an approximately zero percent chance that you will ever be subjected to online censorship, but if you oppose any of those orthodoxies you will see yourself algorithmically de-boosted, suspended, and shoved further and further away from any position of possible influence.

This is on top of the fact that all traditional media are already 100 percent locked down in support of the status quo. You will never see serious opponents of imperialism, militarism, capitalism and oligarchy elevated to positions of influence in the mainstream news media or in Hollywood; every single one of those positions are consistently occupied by people who have proven themselves to be at least politically mute if not virulently supportive of status quo politics.

For this reason we can accurately say that free speech is already missing from our society in every way that counts, regardless of what our nation’s laws might say.

Free speech matters because dissent from the status quo is how the status quo gets changed. If voices which oppose the status quo are consistently denied access to mainstream platforms and are aggressively suppressed online, they’re unable to change the status quo. They don’t have free speech in any meaningful sense, because they’re actively obstructed from using free speech to do what free speech is supposed to do: challenge existing consensus, norms, systems, and power structures.

If the only way to get your voice into a position of influence is to support the status quo, then with regard to the actual reasons free speech matters it’s functionally the same as having no speech at all. It’s like saying “You have free speech; you can say anything you want into this hole in the ground!”

It doesn’t matter what you’re free to say if nobody hears you say it. If those who support the status quo are loudly amplified on all media while those who oppose it are denied access to mainstream audiences and algorithmically censored, dissenting views have no effect. They might as well not exist. An environment where everyone has “free speech” but only those who support the status quo get heard is functionally indistinguishable from an environment where no one has free speech and only authorized state propaganda gets heard.

Which is of course the idea. A tremendous amount of effort goes into keeping the public from awakening to and freeing themselves from the injustices of status quo systems while still giving them the illusion of freedom. Whoever controls the narrative controls the world.

But how would that work, exactly? How would it be decided who counts as a worthy dissident voice and who doesn’t? Who do we imagine would be making that call? Would we be leaving the question of who qualifies as a legitimate critic of the status quo to institutions who have a vested interest in that status quo, like billionaire megacorporations? Or plutocrat-owned mainstream media “fact-checkers”? Or the government? Or do you imagine that Silicon Valley executives will be shooting you a DM to get your personal okay on whether or not to censor someone?

If you really think about this it quickly becomes apparent that there exists no institution that can be entrusted with the power to determine who is qualified to criticize the status quo, because they’re all inseparably intertwined with it. Even if you had an independent board of rank-and-file citizenry deciding when online censorship is appropriate, its members would all be subjected to the same status quo propaganda systems as everyone else in our society and thus still wildly biased toward the preferences of ruling power structures.

Another problem is that nobody is qualified to serve as an official arbiter of absolute reality. What’s true today may be untrue tomorrow, as we’ve seen time and time again with the official lines about Covid-19 since the outbreak. It could turn out in the future that there are in fact problems with mRNA technology and that some of the concerns being voiced today were entirely well-founded. We simply do not know for certain, because we are not the omniscient demigods that our egos are often tempted to pretend we are.

Protecting our ability to collectively course-correct is more important than preventing people from saying things that aren’t currently considered true. So important that it outweighs even the worst consequences of some people potentially making poor health decisions as a result.

So it becomes clear that the only thing to do is let everyone speak, on the platforms that people have come to rely on for sharing ideas and information with the largest possible number of people. A great many of them will be wrong, and a great many of them will be stupid. But the alternative is shutting down the possibility of healthy change ever occurring in a status quo that is killing our ecosystem, pushing us toward confrontations between nuclear-armed nations, and becoming increasingly despotic.