Jumpers at the Currumbin Valley Rock Pools: The Photography of Russell Shakespeare 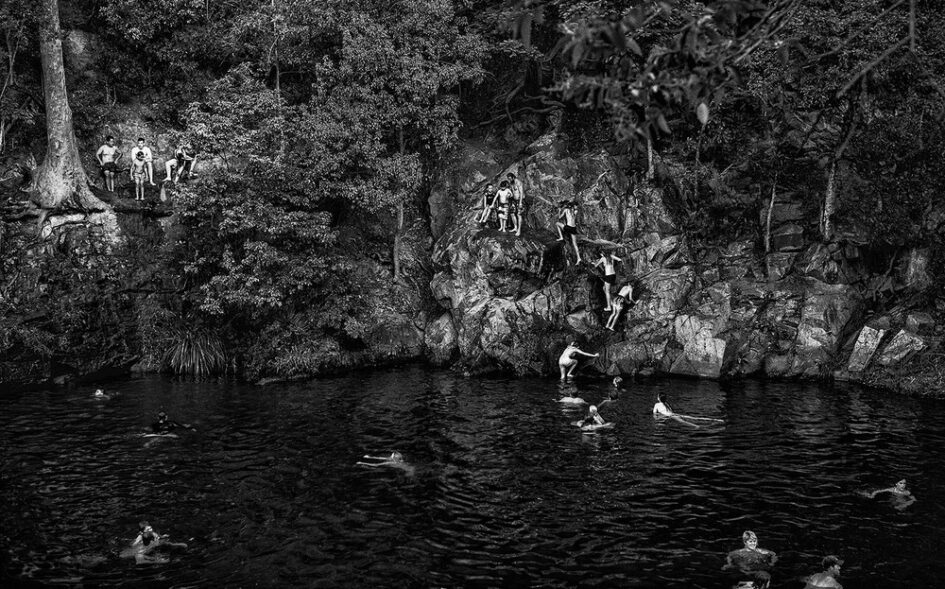 “For once you have tasted flight you will walk the earth with your eyes turned skywards, for there you have been and there you will long to return.”

The Currumbin Valley Rock Pools are about five minutes from where I live. I started this project about four years ago. I was working full time with News Corp and tired of travelling with so much camera gear. And always being somewhere else.

We used to go to these rock pools all the time as a family. And when you’re there, you can’t help but notice all the people clambering over the rocks and in various stages of jumping, and climbing.

And I thought, man, this is a beautiful place.

I started looking at people jumping, and that moment before they hit the water. It was quite amazing looking at their faces and body shapes, and that’s when I thought, I’m going to do a story on the rock pools.

Every weekend I would get up to the rock pool, just go for a swim, take my camera with me. And then I would just sit on the rocks for an hour or two, and see what happened.

Sometimes it would be jam packed. Other times, there would hardly be anybody there.

The more I went, the more I got used to the rhythm, and began working on instinct. I could tell from the heat in my own house what it would be like at the pool.

The big guy, his wife is sitting on the rock and his kid is clambering up. I didn’t know them, but listening to the parents talk, it was like they had done this as a kid, and they wanted their own kid to experience it.

The problem was the amount of effort it took. They don’t look that out of condition in this picture, but they were really struggling. And seeing him jump, it was pure pleasure, as if he was back as a kid, jumping off the same rocks he did all those years ago.

Where that guy is jumping is actually a very dangerous spot. A couple of people have been killed there.

Underneath the water there is a ledge, and if you don’t jump out far enough you hit it.

In 2016, a 41-year-old man there with his family hit his head on the underwater ledge and died. He jumped 15 metres and it took people 20 minutes to find him. The pools are particularly deep.

I stopped going for a while because there were so many weekends when there would be an ambulance there, from spinal injuries or broken bones.

This girl is jumping about 15 metres up from the water.

She just looked like a ballerina on stage, but was jumping from this massive height; and so relaxed. And the joy. I would have been absolutely terrified, I don’t even jump at this place. But she was just so calm and relaxed, and did it with ease and grace.

I suppose that is the thing I am looking at when I am doing these photographs. That moment in the air, or just before impact.

That moment when they completely let go of everything; they are just falling.

There is a certain time of day when a shaft of light hits that part of the rock pool, and this is that moment. You can see the light playing up into the tree. It only happens late in the afternoon, just as the sun is going down over the other side of the mountain.

Once I started recognising the life of the rock pool, I would time my visits when I knew I would start getting those little shafts of light.

An Amazing Time of Day

This is an amazing of time of day, where the rock pools are lit up with shafts of light.

Even the guy falling is lit up; as if a little spotlight has come on him.

For these kids, it is almost like a rite of passage. You see them on the far left hand side, where there are two little girls. This is only a metre from the water.

As they get bolder, they go higher.

The rock pool is almost like an amphitheatre, you have people sitting on the opposite side. Everyone is watching what is going on. Yelling out to jump, or do a backflip.

I find it a bit scary, because the tourists don’t know how dangerous it is. When people are jumping, I swim up and tell them, you know there’s a rock ledge there. Someone died a year ago.

But for the locals, it is an essential part of summer. It gets particularly hot in these parts.

Staring at the Sky

These are two international tourists who weren’t jumping, they just found this stick and were floating on their backs for ages. They seemed to love it.

When you are floating on your back like this, you feel like you are in a William Robinson landscape. You are staring at the sky, and the trees come over, like a fish eye lens. The trees, the sky, you almost go into this trans like state of slowly moving around in the water.

I have been photographing William Robinson, whose book The Transfigured Landscape is a genuine classic, for years. Much of his work is in this area of the Gold Coast hinterland, which the Currumbin Rock Pools are a small part of.

When you walk into a room with a Robinson painting, you just have to sit down and take it all in, they are so intense. It’s the same sensation floating on your back at the rock pool, slowly drifting around the pool and looking at this amazing landscape surrounding you.

The Evolution of the Jump

When I saw this shot, it immediately came to me, like ants or crabs making their way up a rock wall. All the varying stages, it is almost like a circle. They are just tracking their way up the wall to the final jumping point.

Above the vulgar flight of common souls, as someone once said.

Or to quote another largely unknown: “One power descends and wants to scatter, to come to a standstill, to die. The other power ascends and strives for freedom, for immortality. These two armies, the dark and the light, the armies of life and of death, collide eternally.”

There is about these pools, the simple act of kids climbing up and jumping off rocks and into the water, over and over again, all these things. There is a profundity in the beauty and the simplicity of it.

And also, because it has been a rite of passage in this area for generations, a symbol of youthful joy.

Because all this happens in December and January, when the whole of Australia knocks off for the summer break, and mere things like struggle and work and turmoil are all left behind, there is in it something of the great Australian daze.

Earthly things, material things, school marks and paying bills and climbing corporate ladders, the ordinariness of life that gets you down, none of it matters in that wonderful moment before you hit the dark water of the pool.

Life doesn’t always work out as we might hope. We become slaves to work and relationships and responsibilities, even to misfortunes and personal failings.

But in these moments there is a great joy and liberation. The greatest moment of freedom, perhaps, these people might ever experience.

However you see it, for whatever reason, the Currumbin Rock Pools are a special place. They have played a part in childhood dreams for many generations, and will no doubt do so for many years to come.

This piece was compiled by John Stapleton, the editor of A Sense of Place Magazine.