‘I Simply Haven’t got it in me to Do It Again’: Imagining a New heart for Flood-stricken Lismore 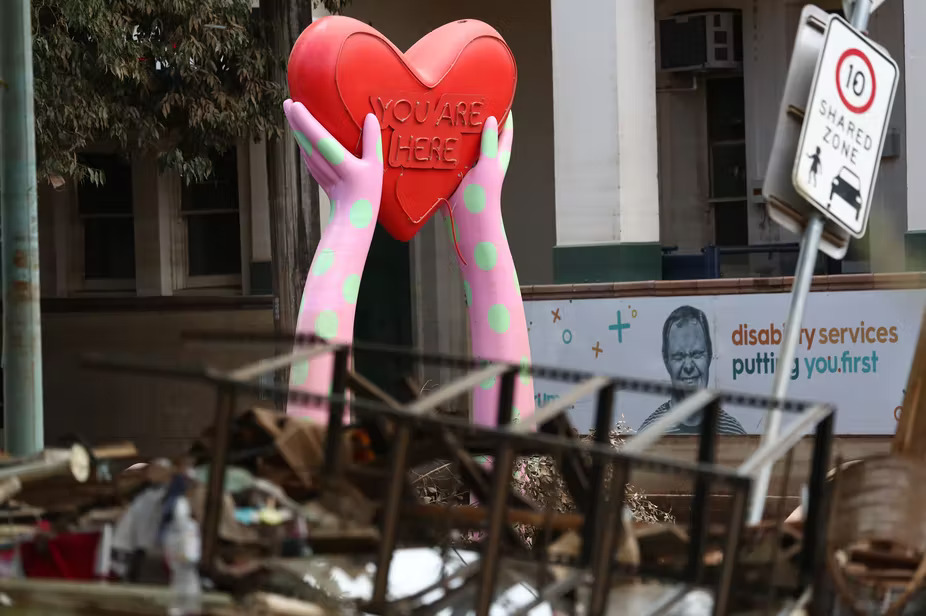 The flood crisis in northern New South Wales has left lives shattered. Those worst affected are dazed and struggling to comprehend the loss of life, homes, livelihoods and possessions.

We are both residents of the hard-hit Lismore region, as well as researchers with skills in geography, community development and resilience. One of us, Jean Renouf, also works for Fire and Rescue NSW. We are both helping people devastated by the recent floods and its aftermath.

We’ve seen the heartbreak in Lismore first-hand. Shock and pain is evident in people’s eyes. The reality has hit that there’s no longer a coffee shop in the town centre, no pub, restaurant, hairdresser, clothing store, pharmacy or newsagent. Horror at the annihilation of the town they love is palpable.

There is also a strange feeling of déjà vu. The town struggled back to life after the flood of 2017. Now, people talk of leaving Lismore. As one business owner said:

I survived ten years here. I picked myself up and started again after the last flood. I simply haven’t got it in me to do it again.

So what will it take to rebuild Lismore? And how might the new town be more resilient?

Lismore sits on a vast flood plain beside the Wilsons River.

Over the years, improvements in road transport and other services mean Lismore’s riverside CBD location has become less necessary.

Lismore is a town accustomed to floods, but the most recent flood was at least two metres higher than those previously recorded. Aboriginal elders, however, report “big floods” in the past topped Lismore’s cathedral hill, as this one did.

A one-in-ten year flood levee was built in 2005 to protect the CBD. However in 2017, water spilled over the levee and caused one of the most damaging floods this century.

When levees are topped, flood waters can rise rapidly and become trapped rather than draining away. Levees also give a false sense of safety to Lismore businesses.

Constructing buildings using specific materials and design can make them flood-resilient. But the contents cannot be flood-proofed or affordably insured.

Other engineering solutions have been proposed, including excavating river bends to speed up the exit of floodwater. But such measures can worsen flooding downstream and are unlikely to help during major floods.

Lismore residents are unlikely to support proposals for a new dam upstream, which would create environmental and social damage.

Key to a re-imagined Lismore would be a staged move of the CBD to higher ground.

One strategy would be to encourage land swaps, with Lismore City Council exchanging commercial land in the CBD for land on high ground (either land it currently owns or land it purchases). A well considered “structure plan” – used to manage growth and change – with careful rezoning could encourage changed land use and attract new commercial development.

Financial incentives could encourage owners of commercial premises to rebuild in safer locations. This could create new, smaller hubs for professional offices, a retail precinct or cultural activities.

Consideration should be given to locating multiple services on flood-free land owned by state or federal authorities. This might, for example, bring together emergency services, health services and government support offices.

Houses deemed unsafe should not be rebuilt in the same place. Housing blocks may need to be bought back by authorities. Where houses can be repaired, some may be relocated to higher ground.

Before this year’s floods, housing in Lismore was already in short supply. Creative planning could address this – perhaps allowing landholders to build tiny houses or granny flats on high ground.

During the recent floods, we saw police, SES and fire stations engulfed by floodwaters, rendering them inoperable. Emergency service bases located below maximum flood heights must urgently be relocated or adapted.

And what to do with the riverside land where the CBD sits now?

The riverine environment could be restored. Impervious surfaces such as asphalt and concrete could be replaced with regenerated bushland to slow water runoff.

Expansive parklands could replace commercial premises beside the river. This “green heart” could incorporate new facilities such as an ampitheatre and sports fields in areas less likely to flood, retaining some heritage buildings for public use.

If these sites did flood, they would be more easily restored afterwards than is the case for current commercial premises.

This new Lismore will not be easily achieved. Significant public and private funds will be needed. It will take political will and, above all, community support.

This might all seem very hard, but towns have been fully or partially relocated for similar reasons in the past – most recently, at the Queensland town of Grantham.

Many Lismore people would love to live in a safer and more prosperous town with a new CBD and verdant riverside community precinct.

Such changes will encounter justifiable resistance, however, including from business and property owners in the CBD. Earlier this month, Lismore mayor Steve Krieg summed up the sentiment of some, telling the media:

Forty years ago people tried to [move Lismore] but what you have to understand is that Lismore people love Lismore. They don’t want it to move or be taken away from them.

However, the economic, social and emotional cost of this flood is incomprehensible. Residents and businesses are considering leaving Lismore for good.

This town with heart now needs a new heart.