Clive Palmer and One Nation flopped at the election. What happened? 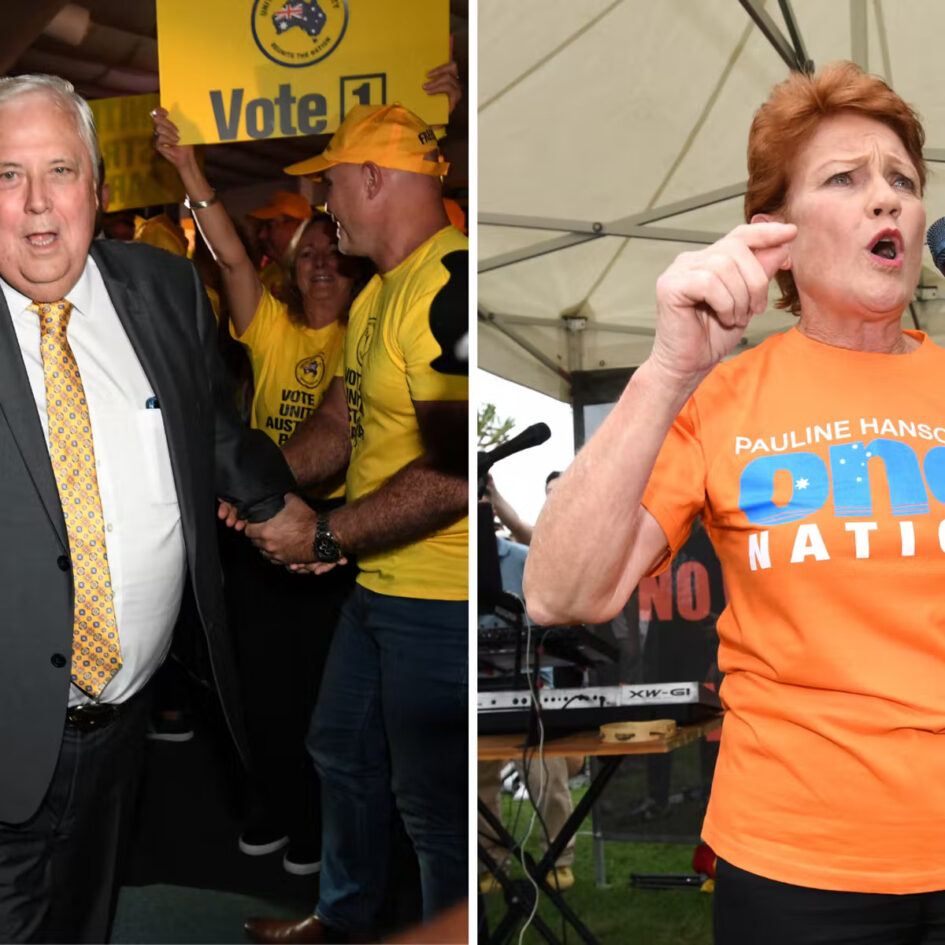 Many commentators tipped Clive Palmer’s United Australia Party (UAP) and Pauline Hanson’s One Nation to perform well this election by scooping up the “freedom” and anti-vax vote from voters angry about how the pandemic was handled.

But this wasn’t the case.

The parties did see a modest rise in their vote, but not enough to translate into significant electoral success. Neither party won any seats in the lower house.

UAP candidate Ralph Babet is likely to pick up Victoria’s sixth Senate seat – in part thanks to preferences from the Coalition, who put UAP second on their how to vote cards in the state. But this may be all Palmer gets for his obscene campaign spending.

UAP leader and former Liberal MP Craig Kelly lost his seat of Hughes, and Palmer failed in his bid for a Queensland Senate spot.

One Nation also failed to pick up any extra Senate seats. Pauline Hanson is projected to hold onto her Senate seat, only just, while Malcolm Roberts continues as a Senator having earned a six year term in the 2019 federal election.

As a populism researcher, I’ve taken a keen interest in these minor parties. Here’s why I think they did so badly.

UAP garnered about an extra 0.7% of the national primary lower house vote compared to 2019 (for a total of 4.1%), after spending an estimated A$70–$100 million. In Queensland the party has thus far secured just 4.3% of the Senate vote – and this is where Palmer himself was the lead Senate candidate.

While in 2019, the party didn’t have much of a platform outside of being anti-Bill Shorten, this wasn’t the case in 2022. They had visible policies on cost-of-living, such as housing affordability and investing Australian superannuation funds in Australian companies.

The party also tried to position itself as the voice of the “freedom” movement, opposing COVID lockdowns and vaccine mandates.

The fact that none of this seemed to resonate – particularly their interest rate policies – surprises me.

I expected the party’s populist, anti-major party, “freedom” agenda to resonate in some parts of the country. For example, many predicted UAP would poll well in the outer suburbs of Melbourne where there’s high levels of anti-lockdown and anti-Dan Andrews sentiment.

While it did poll better than it has before in some of these areas, it didn’t translate into electoral success, nor make much of a dint in preferences as it did last election.

One Nation struggled despite fielding candidates in 149 of 151 House of Representatives seats.

The party’s national primary lower house vote increased a bit – up about 1.8% to 4.9% – but this was mostly because it ran in many more seats than last election.

Early in the Senate vote count it looked like Hanson might lose her Senate seat, but now she’s projected to just hold on.

She faced fierce competition from Palmer, former Queensland Premier Campbell Newman, and a relatively unknown minor party called Legalise Cannabis Australia. Hanson is very well known – particularly in Queensland – so it was also surprising to see her fighting for her political life against a little known party.

6 reasons why UAP and One Nation flopped

So why did both parties fail to perform as well as some thought they might? Here are some of the key reasons:

None of this means we should write UAP or One Nation off for good. Hanson has proven herself a mainstay of Australian politics, and returned from the political wilderness before.

Meanwhile, Palmer has now contested three separate federal elections – each time, seemingly with a completely different platform. With his deep pockets, who knows whether or what he will run on in 2025.

This federal election, however, was not a “populist moment” for these parties. The real story in 2022 is not on the right, but on the other side of politics.